The new trading week began with the European and US stock markets being under pressure amid rising concerns about the second wave of COVID-19 and the risk of new restrictive measures, as several European countries and the US hit a record daily with its new coronavirus cases recently.

Meanwhile, hopes on a new economic stimulus package in the US even before the elections are fading rapidly, as both the White House and Democrats accuse each other of failing to compromise. In view of this, US stock indices lost more than 2% during the session, while oil prices were under pressure, since the lack of new incentives automatically threatens the recovery pace of the global economy, which is already unable to find positive results.

The growth of the fear index provokes demand for defensive assets.

The prices of New Zealand dollar rose by 0.7% in September, while annual inflation rose to 1.4%. However, the price growth is not entirely positive, which was previously thought, since the current situation is much more complicated.

On another note, the level of quarantine measures reached stages 3 and 4 last April, which resulted in the closing of restaurants and cafes. Therefore, many farmers cut back on their crops during this time, because they were not sure about a demand recovery, which led to a supply shortage in September. AAccordingly, inflation rise is not a consequence of the recovery in demand.

Gasoline prices can also be noted as one of the examples. Its prices declined by 12% in the Q2, but grew by 1.7% in Q3, which does not compensate for the huge decline in April-June and indirectly indicates a decline in consumption; hence, the industry is recovering at a slower pace.

At the same time, there are also clearly positive signals. New Zealand's trade balance is rising and looks much better than before the pandemic. As a result, the current account deficit narrowed to 1.9% of GDP, which is the maximum in 10 years. 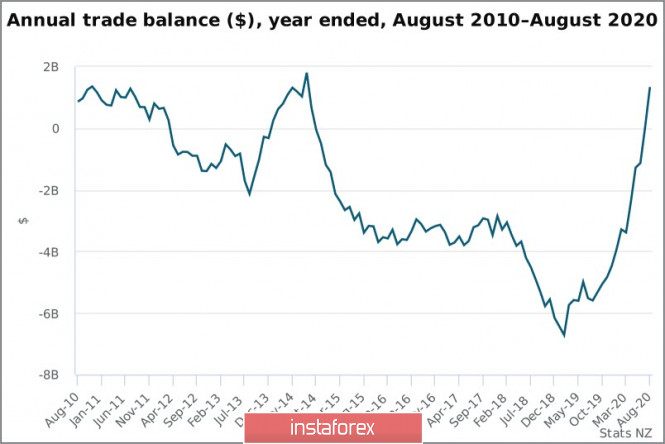 This leads to one important conclusion for the prospects for the NZD in the coming weeks. The RBNZ ensured to lower its key rate at a meeting in April 2021, relying on forecasts for economic recovery. It seems that the government does not need additional funding, which is not urgently necessary. Thus, this may lead to a reassessment of the RBNZ's future measures. Accordingly, NZD is starting to look more advantageous against most G10 currencies.

At the same time, the net long position for the reporting week slightly changed, amounting to 434 million. We have a positive trend and the dollar dominates in the debt market. In any case, the demand for government bonds has the opposite dynamics, but the relative changes in the inflow of funds to the New Zealand stock market show growing confidence in the approaching recovery of the country's economy, while the US stock markets directly react only to rumors about the likely expansion of QE. Thus, the estimated fair price made an upturn. 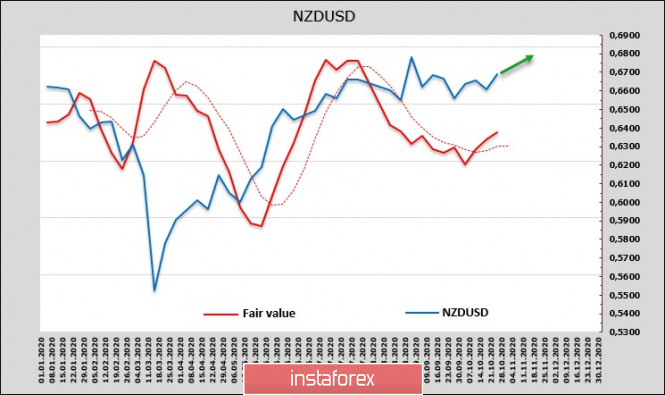 There is a chance for the NZD to get out of the range up. If this happens, we can expect a trend change to the zone of 0.6750/6800, followed by an attempt to update the high. However, this option will be cancelled if investors will dismiss the scenario of Mr. J. Biden's victory on the election.

The Australian dollar is trading near the upper limit of the downward corrective channel, which is around 0.7140/50. There is no internal justification on attempts to rise, as they are only a response to forecasts of Biden's upcoming victory in the US elections. Therefore, we can expect the dollar to weaken sharply after this.

The net long position rose by 200 million over the week and reached 476 million. Although there is an advantage, it is insignificant. The estimated price is still directed down, so growth attempts are naturally corrective. 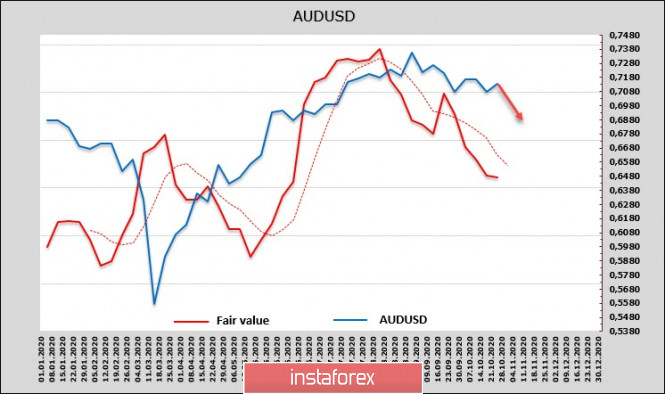