Hot forecast and trading signals for GBP/USD on October 2. COT report. Pound in a precarious situation. Bears preparing a 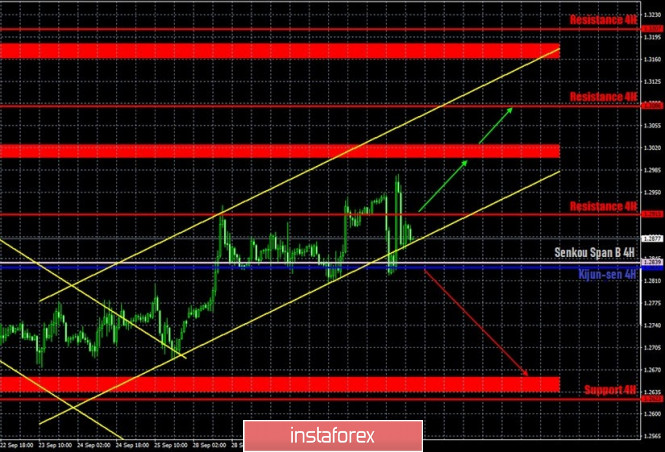 The GBP/USD pair continued to trade within the ascending channel on October 1, leaving it only for a short time since the market reacted to an extremely important fundamental background. However, sellers could not remove the pair from the area below the Kijun-sen and Senkou Span B lines, so the quotes returned to the channel very quickly. Thus, at the moment we can say that the upward trend continues. Today we can expect a renewed strengthening of the British currency. Sellers failed to seize the initiative on the first attempt, however, given the fundamental background from the UK, it is possible that there will be new attempts. And in the very near future. Bears need to move the pair below the Senkou Span B and Kijun-sen lines in order to count on a new downward trend. 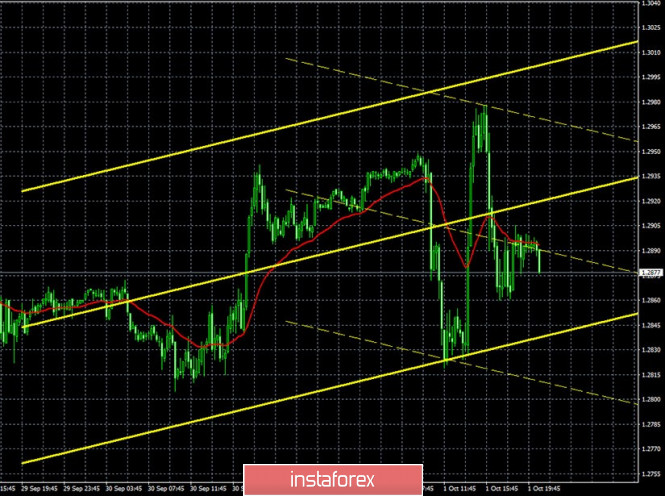 Linear regression channels are directed towards different directions on the 15-minute timeframe, displaying trades in multiple directions throughout the day. The latest Commitment of Traders (COT) report for the British pound showed that non-commercial traders got rid of buying the pound and opened Sell-contracts (shorts). A group of commercial traders got rid of huge amounts of both longs and shorts of the pound. We then concluded that the pound sterling is now, in principle, not the most attractive currency for large traders. The new COT report showed absolutely minor changes for the "non-commercial" group. Buy-contracts (longs) fell by 2,000 while Sell-contracts decreased by 1,500. Thus, the net position for non-commercial traders remained practically unchanged for the reporting week (September 16-22). The British pound continued to fall, which can be considered a consequence of the previous reporting week, when the net position of non-commercial traders greatly decreased, by 11,500 contracts. No changes in the rate of the pound/dollar pair on the 23rd, 24th, 25th, which will be included in the next report. Thus, a long term decline in the pound's quotes is quite questionable, although the pound is still the most unattractive currency in the foreign exchange market.

The key news of the day was a statement from Brussels claiming that the European Union is starting a lawsuit against London because of British Prime Minister Boris Johnson's resonant UK Internal Market Bill. They jumped, as they say. After that, the pound was thrown from side to side, and the pair only managed to calm down in the evening. All other news of the day certainly fell into the shadows. We have already talked about US reports in the article on the euro/dollar. The index of business activity in the manufacturing sector was published in Britain, which marginally changed. There were no more reports in Britain. No scheduled macroeconomic publications for Britain on Friday, however, at any time, traders may receive new information on the confrontation between Brussels and London. Which, naturally, can cause a new storm in the foreign exchange market. In addition, the US will publish an important NonFarm Payrolls report for September. The forecast is +850,000. A value less than this figure may create additional pressure on the dollar, but in general, the pound sterling is in a precarious situation due to events related to Britain, Brexit and negotiations with the EU.

We have two trading ideas for October 2:

1) Buyers continue to push the pair up, but they remain inside the ascending channel. Therefore, you are advised to stay with long positions while aiming for the resistance area of 1.3004-1.3024 and the 1.3086 level as long as the pair remains above the Senkou Span B line and is within the channel. Take Profit in this case will be from 100 to 170 points. The current fundamental background is simultaneously bad for both the pound and the dollar, but it seems to be worse for the pound.

2) Sellers failed to settle below the Kijun-sen line several times in a row, so they remain out of the game for now. They need to wait for the price to settle below the Kijun-sen line (1.2831) and only after that should you resume trading downward while aiming for the support area of 1.2636-1.2660. Take Profit in this case can be up to 130 points.