Hot forecast and trading signals for EUR/USD on October 26. COT report. EU service sector starts to face problems due to 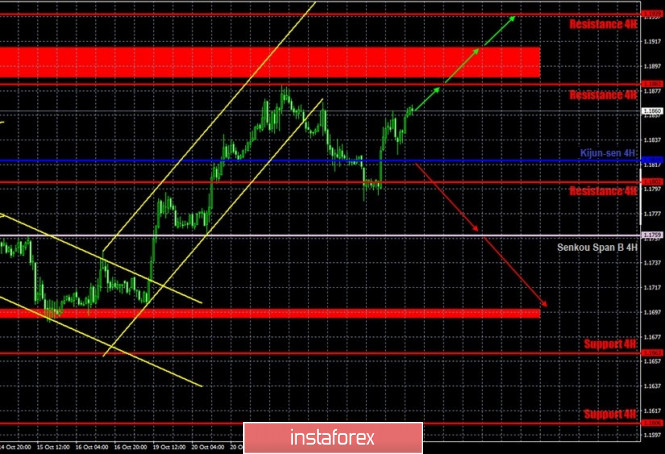 The euro/dollar pair abruptly moved up on the hourly timeframe on Friday, October 23, settling above the critical Kijun-sen line and then it rushed to the resistance level of 1.1882, which was already reached last week. Thus, the upward trend continues in spite of the fact that the pair previously left the ascending channel and the price was settling below the Kijun-sen line. It will be extremely difficult for traders to overcome the 1.1882 level, as well as the resistance area of 1.1887-1.1912. Take note that the euro/dollar continues to trade within a horizontal channel, even two, and the 1.1900-1.1920 level is the area of the upper boundaries of both channels. Therefore, a rebound from it is very likely. On the other hand, going beyond it will show the bulls' intentions to move up further. 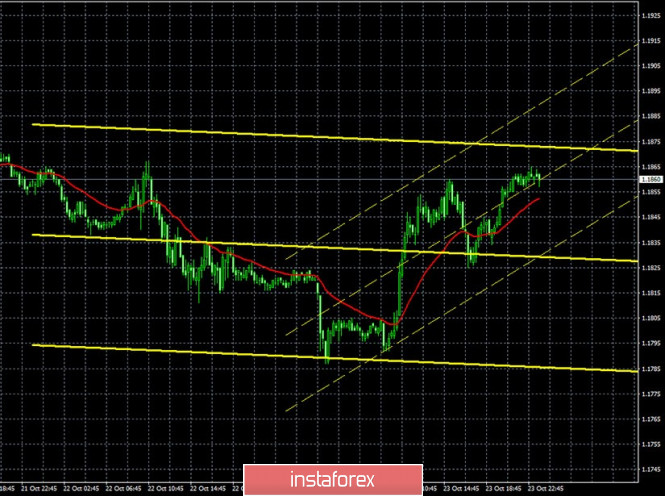 The lower linear regression channel turned to the upside on the 15-minute timeframe, displaying the resumption of the upward movement on Friday. But further growth prospects will entirely depend on the 1.1900-1.1920 area. 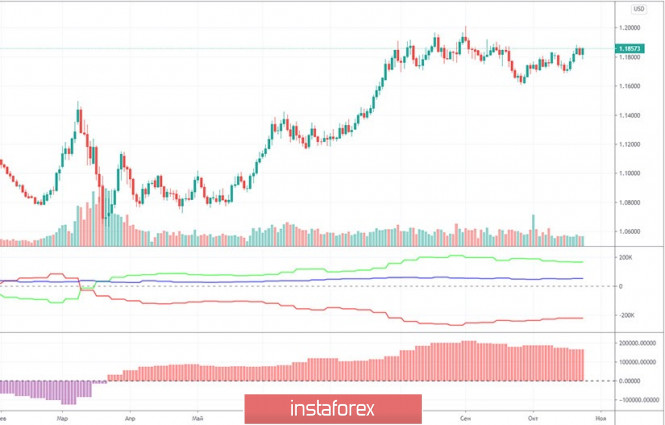 The European Union and Germany published indexes of business activity in the services and manufacturing sectors last Friday. Traders have not been reacting to macroeconomic statistics for quite some time now. However, they react to the general fundamental background. For example, the loss of 32% of GDP by the US economy in the second quarter cost the dollar approximately 13 cents paired with the euro. Thus, the deterioration in business activity may indicate serious consequences for the economy as a result of the second wave of coronavirus. In principle, this is exactly what we can say by looking at the indices. In Germany, the service sector continued to decline and reached 48.9, while it continued to decline and hit 46.2 in the European Union as a whole. The service sector, the industry that suffers the most from quarantines, epidemics and various kinds of restrictions, just began to suffer, as soon as high levels of COVID-2019 morbidity began to be recorded in Europe, compared to that of summer. Similar indices were published overseas, but they showed the exact opposite picture. The service sector is doing well and rose to 56, while the manufacturing PMI fell to 53.3.

We have two trading ideas for October 26:

1) The pair still maintains the prospects for an upward trend. And so traders are advised to continue trading up while aiming for the resistance levels of 1.1882 and 1.1939 as long as the price is above the Kijun-sen line. Take Profit in this case will be up to 70 points. However, one should take the 1.187-1.1912 area into account, which the bulls may not be able to overcome, as well as the 1.1900-1.1920 level.