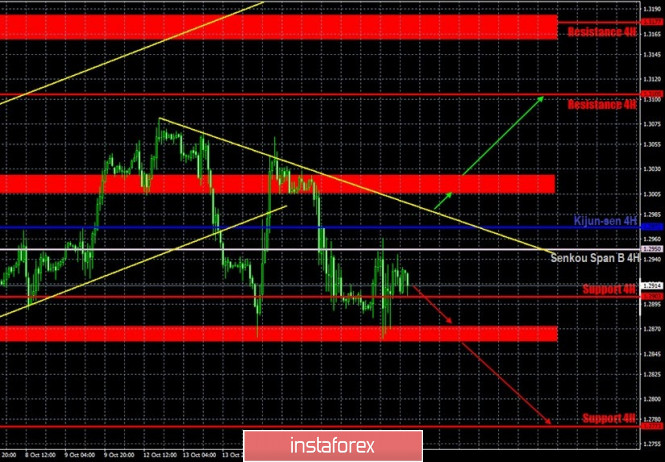 The GBP/USD currency pair traded in different directions on Friday, October 16 and failed to overcome either the support area of 1.2857-1.2873, nor the Senkou Span B line. Thus, the pound/dollar pair may continue high-volatility movements that are quite complex, which is extremely difficult to work out even for experienced traders. Formally, the downward trend remains, since there is a downward trend line, however, the movements are quite strong, accompanied by deep corrections. In simpler terms, we can call this a "storm". Therefore, the buyers have no initiative now, and the bears need to try to overcome the area of 1.2857-1.2873 in order to expect further downward movement. 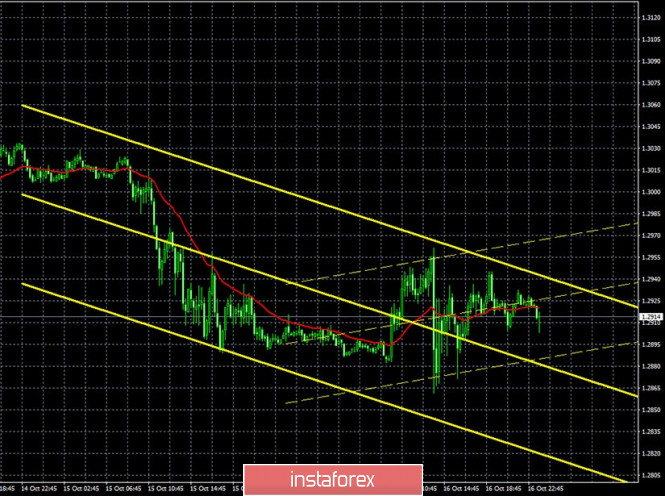 The lower linear regression channel turned upward on the 15-minute timeframe, which reflects an unsuccessful attempt to overcome the 1.2857-1.2873 area on the hourly timeframe. Thus, the bulls may attempt to take the pair to the psychological level of 1.3000. 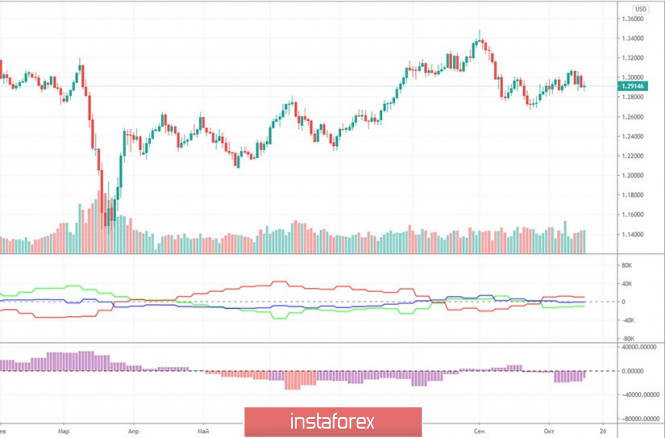 No macroeconomic reports released in the UK last Friday. However, traders don't really need it now. Market participants are completely absorbed in the topic of negotiations between Brussels and London, which fail over and over again. In such conditions, it is quite difficult to buy the pound, especially in the long term, since the British economy is almost expecting a new recession in 2021, and companies, firms and capitals continue to leave Great Britain. If relations between the eurozone and the UK become even more tense due to the "Johnson Bill" and the absence of a trade deal, then no one has a reason to envy the pound at all. So far, this currency continues to stay afloat due to the very unstable situation in the United States and the complete uncertainty of the future of this country and its economy. Traders are just as wary of investing in the dollar as they are in the pound. At the same time, there is even an element of panic in the market, since the pound is quietly moving two hundred points in different directions within a short period of time. There are no UK macroeconomic reports scheduled for Monday, but traders are encouraged to continue to monitor any news regarding the epidemic in that country, negotiations with the European Union, and any speeches by Prime Minister Boris Johnson.

We have two trading ideas for October 19:

1) Buyers for the pound/dollar pair have released the initiative from their hands. Thus, long positions are not relevant right now, however, in case the new trend line has been broken, you can consider longs while aiming for 1.3105 and 1.3177. Take Profit in this case will be from 100 to 150 points. However, we draw your attention to very frequent changes in the direction of movement and high volatility, so we recommend trading in small lots.

2) Sellers keep the initiative, but at the same time they cannot overcome the 1.2857-1.2873 area. If they manage to settle below this area, then we can recommend new sell positions on the pair while aiming for the support level at 1.2773. Take Profit in this case can be up to 70 points.