The GBP/USD pair left the ascending channel on October 7, and also settled below the critical Kijun-sen line. The only thing that the bears have not managed to do so far is to take the pair below the Senkou Span B line. And so sellers made the first significant step towards a new trend, but so far we can not confirm it. The key moment is when the price rebounds from the 1.3000 level, which we consider to be the most important. The current value of the Senkou Span B line - 1.2825 - is also very important, since earlier the price rebounded off it several times. Consequently, it can rebound this time too. In this case, the pair may generally go sideways between the levels of 1.2825 and 1.3000. 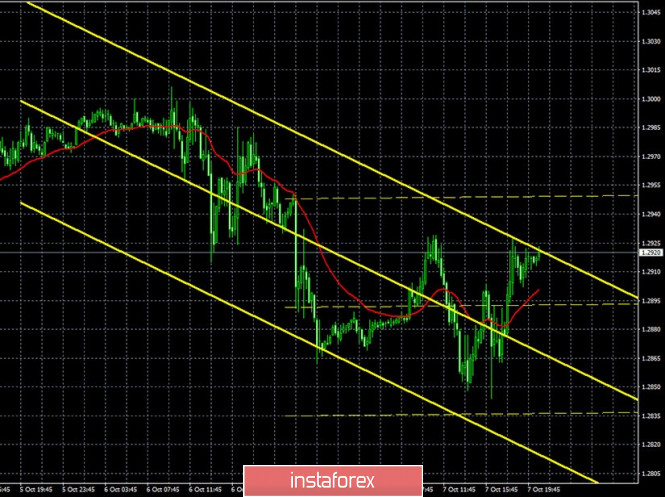 Both linear regression channels turned to the downside on the 15-minute timeframe, which is a sign of the beginning of a downward movement on the hourly timeframe. The main resistance for the declining movement is now the Senkou Span B line at 1.2825. Without overcoming it, there will be no further downward hike. 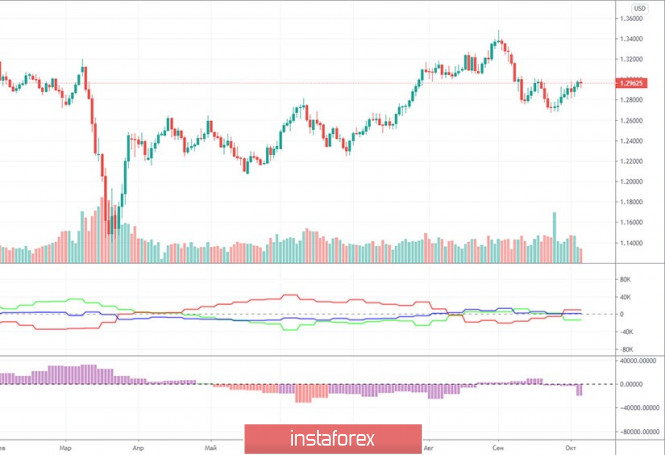 The latest Commitments of Traders (COT) report for the British pound showed that non-commercial traders started to open high-volume sell contracts. In total, 12,000 Sell-contracts (shorts) were opened from September 23-29. At the same time, the "non-commercial" group of traders also closed around 4,000 Buy-contracts (longs). That is, the net position for this category of traders suddenly decreased by 16,000, which is a lot for the pound, given that there are about 100,000 contracts open at this time. The sentiment of non-commercial traders has become much more bearish. However, the pound only rose in price from September 23-29. It did not grow much, only 140 points, and continues to move up, very uncertainly if I may add. We tend to think that the pound will resume falling in the near future (based on the latest COT reports). As for the indicators, they do not show anything extraordinary now, according to the COT reports. They do not signal a possible global reversal of the pair. Only that non-commercial traders believe more in the dollar's growth rather than the pound (lower indicator).

No major macroeconomic reports from the UK or America on Wednesday, October 7. We do not even take into account the minutes of the last Federal Reserve meeting, since it does not contain any fundamentally new information. Fed Chairman Jerome Powell already announced all the information that markets needed, as he has spoken six times over the past three weeks. We clearly know that the Fed is not going to lower the key rate below 0%, and that economic recovery will slow down. Powell has also reiterated that the prospects for the economy will depend on the success in the fight against the epidemic. In turn, the Bank of England admits a decrease in the rate to the negative zone, and all the events in Great Britain make it possible to assume that the pound will fall further. This forecast can only be softened by the conclusion of a trade deal, however, this will probably have to wait at least a month. Accordingly, the pair will face either a flat or the pound will fall. Bank of England Governor Andrew Bailey is scheduled to speak today, who may inform the markets something new about the central bank's intentions to change the parameters of monetary policy by the end of 2020.

We have two trading ideas for October 8:

1) Buyers have lost the initiative. Therefore, you can formally consider long positions while aiming for the resistance area of 1.3000-1.3024, if the price returns to the area above the critical line (1.2918). However, we advise you to be extremely cautious when doing this. Take Profit in this case will be up to 70 points.

2) Sellers managed to overcome the Kijun-sen line yesterday, but now they also need to overcome the Senkou Span B line (1.2825). Only in this case will it be possible to resume trading downward while aiming for the support level at 1.2658. Take Profit in this case can range from 70 to 100 points. You can also try to sell the pair in case the price rebounds from the Kijun-sen line (1.2918) while aiming for the Senkou Span B line (1.2825).