Hot forecast and trading signals for the EUR/USD on October 7. COT report. Global reversal of the pair is approaching, but 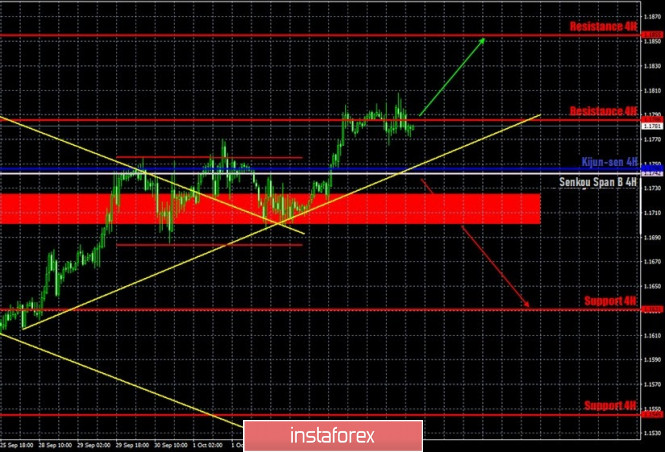 The EUR/USD pair continued to move up on the hourly timeframe on October 6, but it was not strong. Traders took the pair above the resistance level of 1.1786 several times, then below it, but in general we can not conclude that a correction has begun. On the other hand, the ascending trend line remains relevant, which continues to support the buyers of the euro. Hence, the general recommendation seems to be to "buy the pair". In general, the euro continues to trade quite actively, and most importantly with a trend. It is still very difficult for the US dollar to rise in price, as the fundamental background from overseas continues to come, at best, contradictory, and at worst, disastrous. 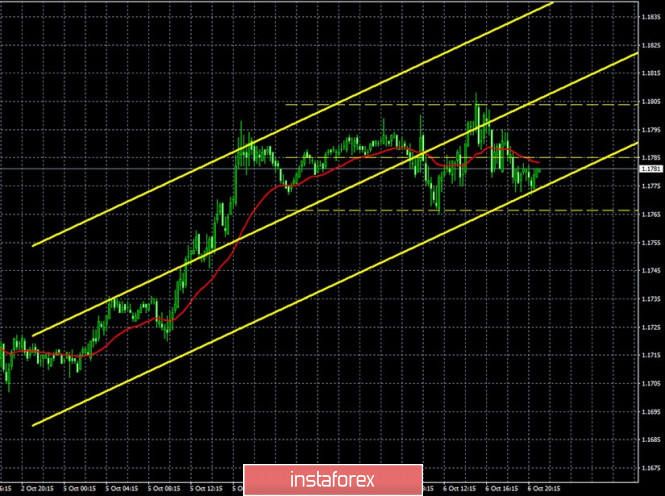 Both linear regression channels are directed upwards on the 15-minute timeframe, which clearly shows that the upward trend will continue on the hourly timeframe. Thus, there are no signs of a downward reversal and the beginning of at least a downward correction, not to mention a change in the trend. 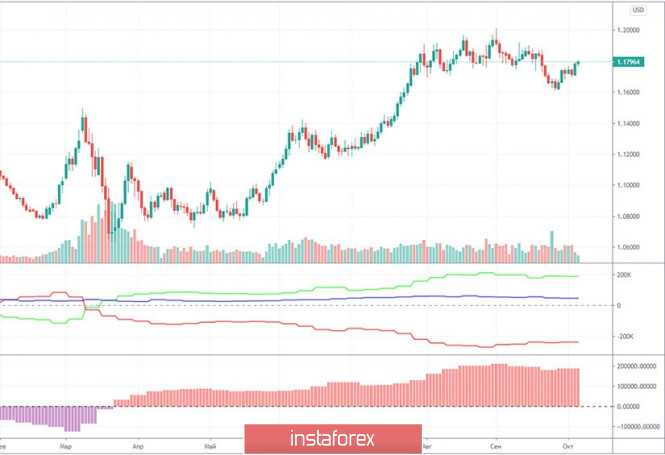 The euro/dollar rose in price by around 30 or 40 points during the last reporting week (September 23-29). We cannot even call it growth, just a normal market noise. The previous Commitment of Traders (COT) report showed that non-commercial traders opened 15,500 new Buy-contracts (longs) and almost 6,000 Sell-contracts (shorts). Thus, the net position for this group of traders increased by around 9,000. The new report clearly reflects what is currently happening in the foreign exchange market. Professional traders closed 4,500 contracts for buy positions on the euro and 3,300 contracts for sell positions during the reporting week. That is, the net position for the "non-commercial" group has decreased by around a thousand contracts, which means that the mood of large traders has become a little more bearish. However, these are not changes that can be acknowledged as global. Therefore, we conclude that the situation has not changed dramatically. The EUR/USD pair generally stood in one place for the next three trading days (after September 29). Therefore, the next COT report may also show minimal changes in the mood of professional traders. Looking at the chart showing the net positions of all categories of traders, we can conclude that a major downward reversal is brewing for the euro. Usually, when the green and red lines are far away from each other, it is the harbingers of a global reversal.

No important macroeconomic statistics on Tuesday, October 6. And so traders were deprived of significant information in order to somehow adjust their strategies. Another speech from European Central Bank President Christine Lagarde, but its essence was rather bearish than bullish. Lagarde expressed her fears that the economic recovery of the eurozone will be delayed due to the second wave of the pandemic. "Instead of the V-shaped economic recovery that we all strive for and hope for, we believe that it can take a W-shape," says Lagarde. Agree that this information could not have caused the euro to strengthen. Nevertheless, the euro remains "on the horse". We can expect another speech from Lagarde on Wednesday, and the minutes of the last Federal Reserve meeting will also be published on this day in the United States. We believe that traders will ignore both of these events, as well as a huge number of previous reports and events of macroeconomic significance and nature. Thus, the upward trend continues for now, and the activity of traders will depend on other factors that cannot be predicted or expected.

We have two trading ideas for October 7:

1) Buyers continue to own the initiative in the market and got the pair to withdraw from the horizontal channel of 1.1683-1.1756. The upward trend remains above the trend line. Thus, traders are advised to continue to trade for an increase while aiming for the resistance level of 1.1855. Take Profit in this case will be up to 60 points.

2) Bears continue to remain in the shadows, but they can return the euro/dollar pair to a downward trend if they manage to gain a foothold below the upward trend line, as well as below the Senkou span B (1.1742) and Kijun-sen (1.1746) lines. Ideally, we recommend waiting for the price to settle below the support area of 1.1700-1.1724. In this case, we recommend opening new short positions while aiming for 1.1631. The potential Take Profit in this case is up to 60 points.

Interesting? Write a comment below.
 #Hot forecast and trading signals for the EUR/USD on October 7. COT report. Global reversal of the pair is approaching, but
Forward 
Backward 