Hot forecast and trading signals for the GBP/USD on October 6. COT report. Pound is struggling to grow due to Trump's illness 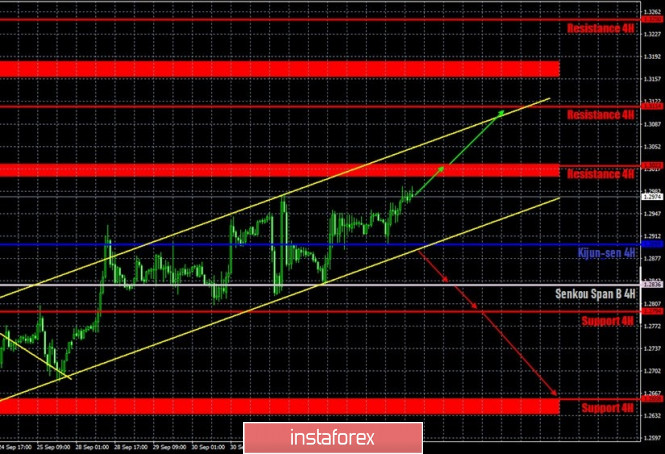 The GBP/USD pair continued to trade within the ascending channel on October 5, which was slightly rebuilt by us. Now it has a smaller slope, but the British pound sterling is still very reluctant to rise in price. Thus, the upward movement continues, but it is difficult to say how long it will last. The problem is the fundamental background, which is equally bad in the US and in the UK. Traders could change their mood to the opposite at any moment, and the pair was generally "stormy" at the end of last week. Therefore, while the initiative remains in the hands of buyers, you can consolidate the price below the ascending channel, which may provoke a renewed downward movement. 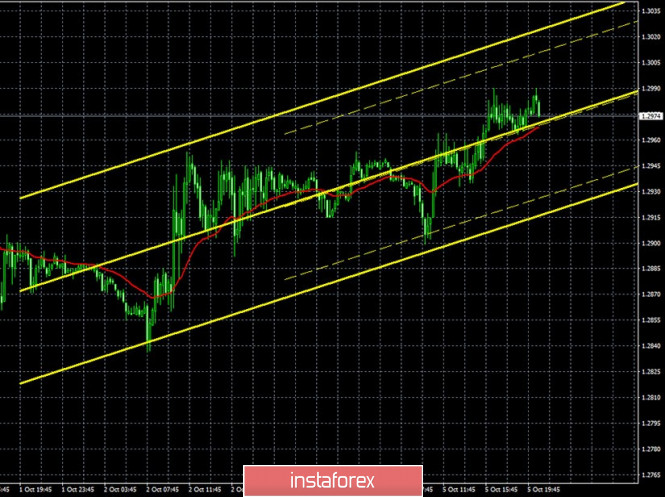 The linear regression channels are directed upward on the 15-minute timeframe, which fully supports the trend of the hourly timeframe and indicates that there are no signs of starting a correction. The latest Commitments of Traders (COT) report for the British pound showed that non-commercial traders started to open high-volume sell contracts. In total, 12,000 Sell-contracts (shorts) were opened from September 23-29. At the same time, the "non-commercial" group of traders also closed around 4,000 Buy-contracts (longs). That is, the net position for this category of traders suddenly decreased by 16,000, which is a lot for the pound, given that there are about 100,000 contracts open at this time. The sentiment of non-commercial traders has become much more bearish. However, the pound only rose in price from September 23-29. It did not grow much, only 140 points, and continues to move up, very uncertainly if I may add. We tend to think that the pound will resume falling in the near future (based on the latest COT reports).

The UK Services PMI was released on Monday, October 5. However, this report is not important, and besides that, it did not particularly impress traders. Business activity rose to 56.1 points. There were no other important economic events in Great Britain yesterday. Federal Reserve Chairman Jerome Powell will deliver a speech today, we recommend not to miss this event, and we also have European Central Bank President Christine Lagarde's speech in the EU. These are potentially significant events, but everything will depend on what the heads of the central bank will say. We would say that the markets currently attach much more importance to US President Donald Trump's illness than to various economic news and reports. As for the UK, Brexit and the one-month-long negotiations on a trade deal remain in first place. Thus, we advise traders to pay more attention to the general fundamental background at this time, and not to single macroeconomic reports.

We have two trading ideas for October 6:

1) Buyers continue to push the pair upward and remain inside the ascending channel. Thus, it is recommended to stay in long positions while aiming for the resistance area of 1.3004-1.3024 and the 1.3114 level as long as the pair remains above the Kijun-sen line (1.2899) and within the channel. Take Profit in this case will be from 30 to 130 points. The fundamental background is simultaneously bad for both the pound and the dollar.

2) Sellers failed to seize the initiative in the market several times, although the attempts were solid. Now they need to wait until the price settles below the Kijun-sen line (1.2831) and under the ascending channel and only after that should you resume trading downward while aiming for the Senkou Span B line (1.2836), support level 1.2794 and support area of 1.2636-1.2660. Take Profit in this case can range from 40 to 200 points.

Interesting? Write a comment below.
 #Hot forecast and trading signals for the GBP/USD on October 6. COT report. Pound is struggling to grow due to Trump's illness
Forward 
Backward 