Formally, the European Central Bank has not changed anything in its monetary policy at all. However, the single European currency suddenly slumped. This is due to the context in which the ECB meeting was held. For example, the traditional formulation that interest rates will remain at current levels, or even lower, until inflation approaches the target level of 2.0%, in a deflationary environment, begins to play in completely different colors. After all, this means that since consumer prices continue to decline, then interest rates can also be reduced. At least the ECB reserves this opportunity for itself. In addition, the text of the accompanying statement says that the emergency asset repurchase program that was introduced due to the coronavirus pandemic, if necessary, can be extended until the end of 2022. German Chancellor Angela Merkel's calls to introduce a new quarantine throughout Europe as soon as possible are quite suitable for the role of that very need. It is obvious to everyone that businesses have not yet managed to recover from the spring quarantine, and new, small and medium-sized businesses simply will not survive. So the ECB will have to make a lot of efforts to prevent a complete collapse of the economy. In other words, just due to everything that is happening in Europe now, all formulations regarding the ECB's possible actions are perceived as concrete plans for the near future. 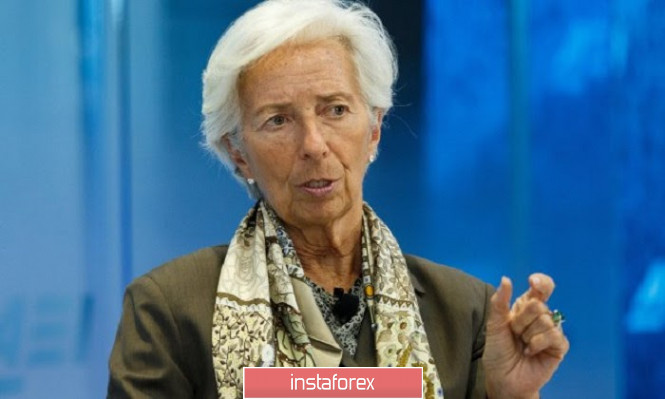 To be fair, take note that the latest US report came out much better than forecasts. Which in itself contributes to the dollar's appreciation. Of course, the number of initial claims for unemployment benefits fell slightly less than expected. A decline was predicted from 791,00 to 750,000. In fact, their number decreased to 751,000. Nevertheless, this is still a reduction. But more importantly, the number of repeated applications for unemployment benefits is falling rapidly. And so it should have decreased from 8,465,000 to 7,900,000. But their number dropped to 7,756,000. And although the previous data, both for primary and repeated applications, were revised upwards, the very fact of the ongoing reduction in unemployment , especially much faster than forecasts, completely eliminates this trouble. In addition, the first estimate of GDP for the third quarter showed that the rate of economic decline in the United States slowed from -9.0% to -2.9%. So the economy is clearly showing a solid recovery. 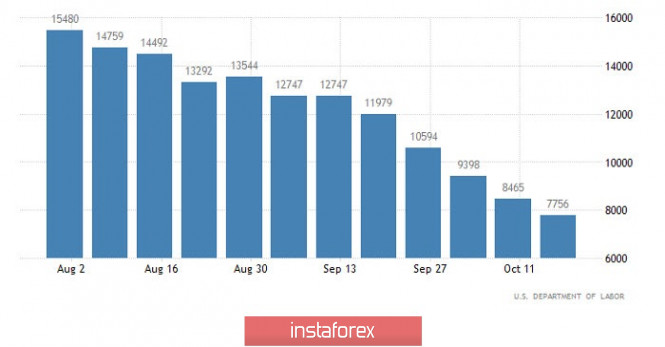 At first glance, the euro can get an excellent reason to rise today. However, this is a misleading impression. For example, a preliminary estimate of GDP may show a slowdown in the rate of economic decline from -14.7% to -8.0%. Everything seems to be good. But it looks more like a disaster compared to the United States, as the scale of the recession is much larger. Also, a preliminary estimate of the dynamics of consumer prices should show a slowdown in deflation from -0.3% to -0.2%. But it is worth noting that this is still deflation, which has been going on for the third consecutive month. So both of these metrics don't look so good. In addition, the unemployment rate, not according to preliminary estimates, but in fact, may rise from 8.1% to 8.6%. And this looks horrifying, as unemployment falls in the United States. Therefore, European statistics are likely to further undermine the position of the euro. 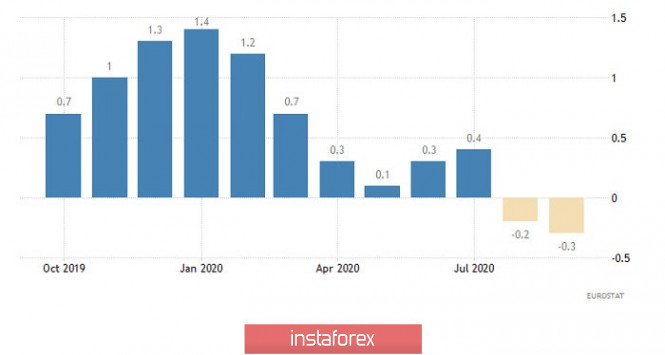 The EUR/USD currency pair managed to maintain the previously set downward sentiment, as a result, the support level of 1.1700 was broken, and the quote rushed to the next pivot point at 1.1650, where a pullback occurred.

Based on the quote's current location, you can see that short positions are still held in the market, which may lead to completing the process of a pullback and could also update the local low.

Acceleration is recorded relative to the market dynamics, which is confirmed by the high speculative interest in the market.

Looking at the trading chart in general terms (daily period), we can see that the upward tick from 1.1612 is almost complete, where the recovery scale is 84%.

We can assume that when the price does not settle above 1.1695, this will lead to bringing back the downward movement, where the previous day's low of 1.1650 will be the first point for sellers. A breakdown of the 1.1650 coordinate will indicate a subsequent movement towards the September 25 low of 1.1612.

From the point of view of a comprehensive indicator analysis, we see that the indicators of technical instruments on the hourly and daily periods signal a sell due to a rapid downward movement. 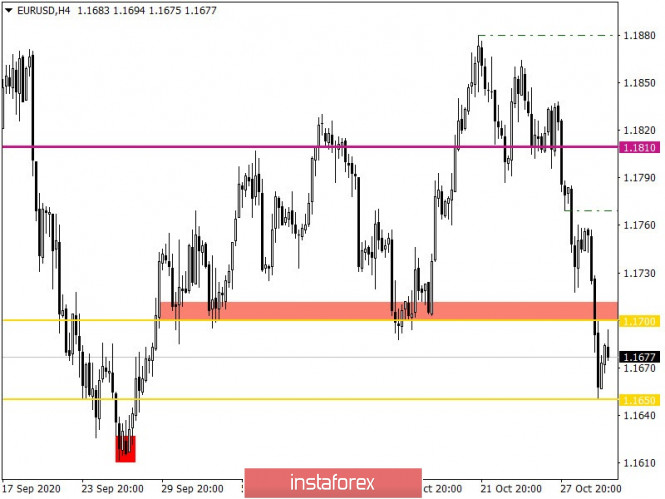