The second wave of COVID-19 again put oil prices at risk of decline. However, is there a danger that the dramatic events that took place in the oil market in the spring of 2020 will repeat and oil will collapse to the values of $20 and below? What will happen in the oil market if Joe Biden wins the US election? Let's try to figure it out in this article.

The second wave of coronavirus infection has covered the world economy, and the incidence rate in the developed world is now even higher than it was in the spring. With the sole exception of China whose restoration is proceeding at a fast pace. However, in other countries, the recovery is not so fast, since many industries, such as tourism or international air transport, have either virtually ceased to exist or the size of the business has significantly decreased during the pandemic era.

The epidemic has not yet been brought under control. However, measures to restrict and close the economy, which many governments have taken this spring, have not been applied now. Widespread blocking and compensation for business losses turned out to be too expensive. Accordingly, the impact of these measures on oil prices is now offset by more lenient quarantine conditions. Thanks to the OPEC+ agreement and the recovery of the global economy in the summer of 2020, oil prices have experienced growth, and commercial reserves in the United States have significantly decreased, although they still exceed their average volumes (Figure 1). 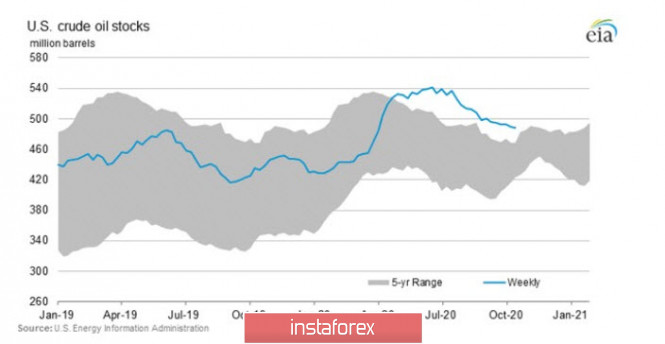 Even though in the past two years, China has started actively trading oil for the yuan, the price of black gold is still determined in US dollars and on US exchanges, and the behavior of traders in WTI futures contracts determines the dynamics of oil prices around the world.

If we consider the situation in the context of supply and demand on futures exchanges, Open Interest in futures contracts is currently at the lowest values since the summer of 2016 and amounts to 2.5 million contracts. At the peak of futures demand, in April 2020, the OI was equal to 3.3 million contracts, which together with the OPEC+ deal allowed the price to grow from a level close to zero to the current values.

Now the situation is qualitatively different. Paradoxically, speculators are the main driving force of the price. If speculators do not see prospects for growth, they will not put their money on it. At the same time, since the summer of this year, the total long positions of speculators on the WTI oil futures market, which has the #CL designation in Instaforex terminals, amount to about 350 thousand contracts. At the peak of demand in June, their value was 381 thousand, now the positions of speculators are 332 thousand. However, even for a deep decline in the oil price, the conditions on the futures market in the current situation are not enough. Speculators do not try to push oil down and reduce their sales, which means that they do not see any opportunities to reduce the price yet. Everything, of course, can be in our turbulent times, but oil prices look at the moment as if the bulls can't, and the bears don't want to. 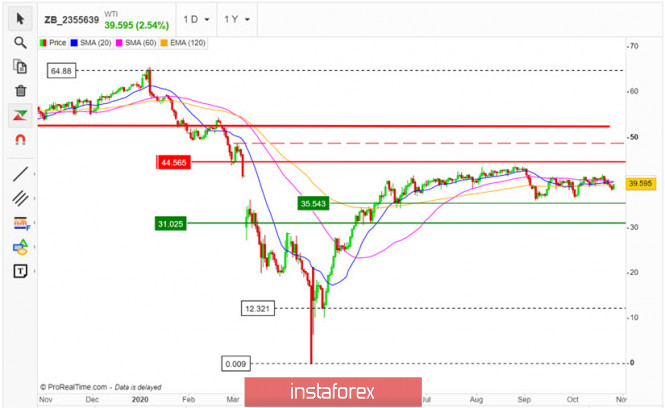 The daily time looks at the situation from the perspective of one month to one quarter, and oil traders should take this factor into account when making decisions. As shown in chart 2, starting from June, #CL oil quotes are clamped in the range of $ 35.50 - $ 44.50 with a width of 9 dollars. Since September, the range has narrowed to $ 4, which fully reflects the current uncertainty in the market. In this situation, the only strategy that can be used by traders in the stock signals trading system will be purchasing from bottom to top of the range and sales from the top end of the range to the lower limit.

Among other things, the range is a factor in reducing volatility, which can increase sharply when the price breaks out of the range. The middle of the range will continue to function as support or resistance, depending on which direction the momentum is directed. The difficulty is that being in the range, the price often makes false breakouts outside its borders. However, careful observation of false movements can provide a great opportunity for a trader to work in the opposite direction of a false breakout. Detecting and identifying false breakouts and traps requires special training and experience from the trader, so novice traders should refrain from using this trading strategy, which does not prevent them from carefully observing and studying it for further application.

With the US election just one week away, there is a perception in the markets that if Joe Biden wins the presidential race, it will be negative for oil. However, not everything is so simple. Biden does advocate limiting the use of hydraulic fracturing on federal lands, but if he wins, this will primarily put pressure on the American oil industry. According to some estimates, Biden's victory will cost 1 million barrels of reduced production in the United States, which is an undoubted positive for the oil market, since in this case, the US share will be received by oil companies from Russia and Saudi Arabia.

In conditions of high uncertainty, traders need to be extremely careful not to open positions with increased risks. On the contrary, the risks should be reduced, not increased. Be careful, follow the rules of money management.