Overview of the EUR / USD pair. October 23. TV debates between Biden and Trump will put an end to the pre-election distribution 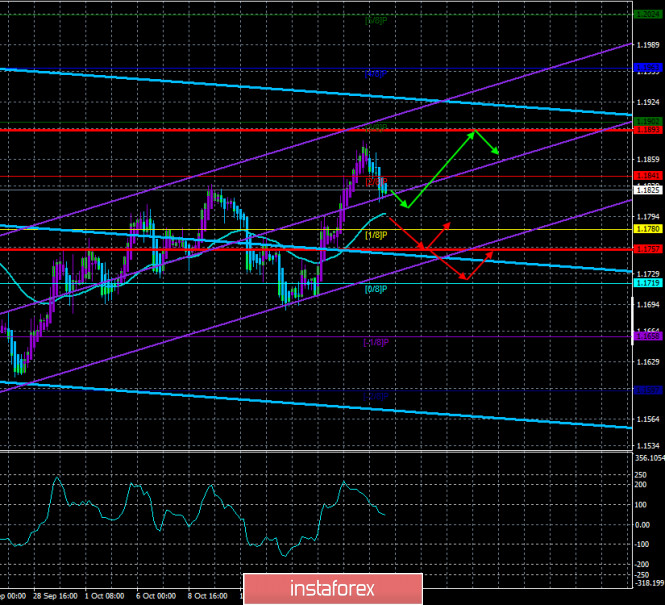 During the fourth trading day of the week, the EUR/USD pair finally began to adjust towards the moving average line. Thus, the price again turned down on the approach to the level of 1.1900 and it continues to trade inside the side channel. After three days of growth, the correction was logical, however, the fact that the pair continues to trade between the levels of 1.17 and 1.19 is even more important. Or between the levels of 1.1640 and 1.1920. In the first case, the side channel is preserved in the second case. Thus, in the long term, the flat continues and traders are recommended to trade based on this. Simply put, few people in the market are now opening long-term positions. This is mainly due to the US dollar since it is the US currency that is currently causing the greatest concerns in a pair with the euro. Concerns about their prospects. No one can say for sure who will be the next President of the United States. Donald Trump himself has shown that a lot depends on the personality of the president, especially the president of the country with the largest economy in the world. Trump wanted to start a trade war with China, and this decision affected not only China and the United States but also many other countries in the world that depend on trade with America and China. Global GDP also suffered, although it would seem that Beijing and Washington were at war. Consequently, no one now can know what the foreign policy of the United States will be in the next four years, how the conflict with the Middle Kingdom will be resolved or aggravated, what will happen to the "coronavirus" and the fight against it, how the economy will recover and what will be the priorities of the White House in the next four years. Therefore, one can not even dream about the growth of the American currency, but at the same time, the majority of market participants, in principle, now do not want to take risks and are just waiting on November 3 to close this issue with the name of the new US president.

Meanwhile, this night will be the last round of televised debates between Donald Trump and Joe Biden. We have already said that the first round ended in complete chaos and was criticized by everyone, from the media and journalists to political scientists and experts in various fields. According to the absolute majority, both presidential candidates did not perform at their best, but Trump simply surpassed himself. The current president interrupted the former Vice President a record 71 times, constantly provoked Biden, and the debate host, interrupted, did not allow to speak. All this has led to the fact that specifically for the sake of Donald, the third round of TV debates will be held under adjusted rules. For example, at the beginning of each 15-minute segment that will be given to candidates to cover each of the six issues, both candidates will be able to speak without interference from the opposing party, since the microphone will be turned off. Six questions: "coronavirus", American families, climate change, racial issues, national security, features of the country's governance. It is on these issues that each candidate will have to speak out. Thus, tonight, American voters (those who have not yet voted or made a choice) will have the last chance to decide on a candidate. I hope that the last round of TV debates will be more constructive. Although, to be honest, it's hard to imagine what would have to happen for Joe Biden to lose this round. Before the first round, most experts gave the victory to Trump, naming as his advantages oratorical skills, arrogance, and a complete lack of respect for the opponent. Many experts believed that Trump would literally "smear" Biden, who was never famous for speeches and the ability to exert psychological pressure. However, in practice, it turned out exactly the opposite. Trump has shown himself to be a kind of boor who can't even allow his opponent to express his point of view, so most observers of the TV debates awarded the victory to the Democrat.

At the same time, former US President Barack Obama openly called on Americans to vote for Joseph Biden for the first time. According to the former US President, Trump treated his position as "a reality show with which you can attract attention and raise your popularity". "He caused irreparable damage to the United States, and the country's reputation in the world was trampled," Barack Obama said. Obama also blames Trump for the weak opposition to the pandemic and the economic damage caused to the country: "The economic damage he caused by softening the response to the pandemic means that he will be the first president since Herbert Hoover to lose his job."

Well, Joe Biden's team has already stopped hoping that Donald Trump will agree to peacefully transfer power in the event of an election defeat. The American edition of the Wall Street Journal reports that Biden's team has already begun to develop a strategy for action in case Trump refuses to transfer power. At the headquarters of the Democrats, they expect Trump not only to refuse to leave the White House but also to refuse to transfer all resources that are associated with the president's work. Simply put, the headquarters of the Democrats do not expect to play together with Trump, on the contrary, they expect all sorts of intrigues from him.

As we can all see, the fundamental background for the US currency remains extremely complex and ambiguous. The number one topic remains the US election, which does not have any immediate impact on the pair's movement, but at the same time, no one can say that it is not an important event for the US dollar, the economy, and the country. Thus, our forecast remains the same. We believe that until November 3, and possibly until the day when the final results of the vote count are known, it will be extremely difficult for the US currency to rise below the level of 1.1700. Thus, most likely, the movement inside the side channel will continue. This time, the pair's quotes worked out the mark of 1.1881, however, a downward turn may occur near it. 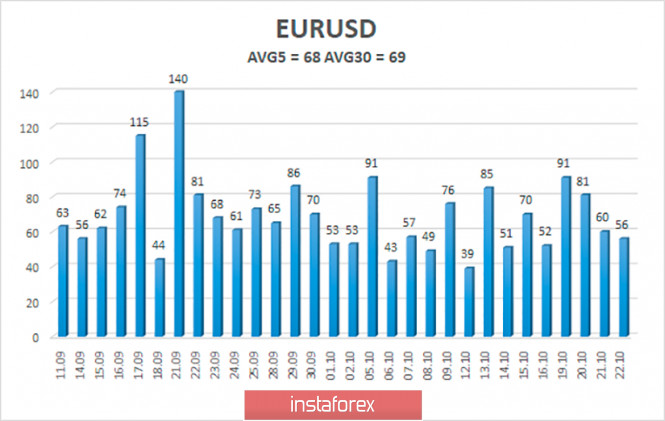 The volatility of the euro/dollar currency pair as of October 23 is 68 points and is characterized as "average". Thus, we expect the pair to move today between the levels of 1.1757 and 1.1893. A reversal of the Heiken Ashi indicator to the top may signal the end of a downward correction.

Interesting? Write a comment below.
 #Overview of the EUR / USD pair. October 23. TV debates between Biden and Trump will put an end to the pre-election distribution
Forward 
Backward 