Overview of the EUR/USD pair. October 12. Displeasure and constant criticism from the markets and the media, as the main 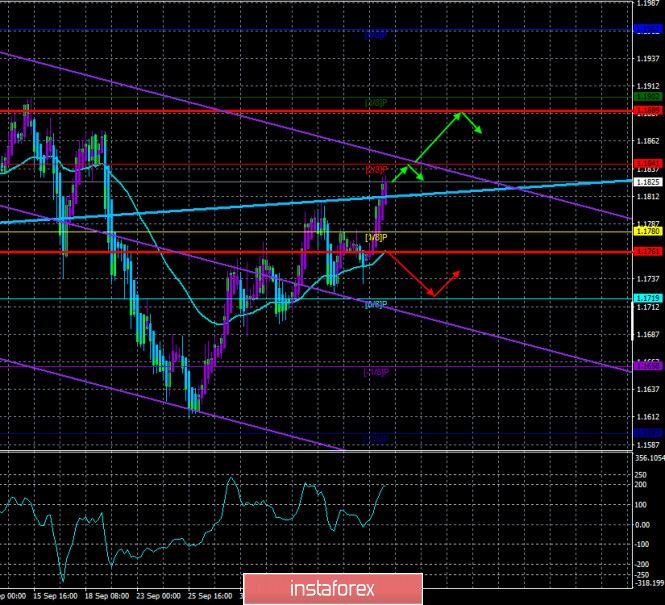 For the EUR/USD pair, the last trading day of the week was quite active. The European currency corrected to the moving average line once again, bounced off it, and resumed its upward movement. Given the fact that no macroeconomic reports were planned for this day in the US and the EU, we can draw a clear conclusion: the new growth of the euro currency was not related to statistics. There was also no news on Friday. Therefore, we tend to believe that the reason for the new fall in the US currency lies in the same factors that we have already listed repeatedly - the fundamental background. A few months ago, we started writing that the epidemiological, economic, social, and political situation in the United States is much worse than in the European Union. And it was these "four American crises" that "beat" the US dollar in the last six months. What has changed in recent weeks? Nothing. America has finally managed to suppress mass protests, rallies, and riots caused by two racist scandals at once. However, this was the least of the four problems. Economic – has not gone away. Moreover, due to the inability of Republicans and Democrats to work "in the same cart", the US economy cannot now receive an additional package of stimulus measures. The political problem is still there. Elections are approaching and all the top political circles are busy with this issue, not solving urgent problems. The epidemiological situation is also not improving. Every day in America, 40-45 thousand people are still infected. Therefore, why should the US currency suddenly start to be in demand in the foreign exchange market? This should also include the uncertainty factor also associated with the presidential election. Investors and traders simply don't want to invest in the US economy and the dollar for the long term until it's clear who will be the next president? The only chance to strengthen the US dollar is only a technical factor. But, as we can see, over the past few months, traders have not managed to correct the pair by more than 300-400 points after a 1300-point increase.

In principle, the activities of any manager can be evaluated quite easily. The more the president or the government as a whole is criticized, the higher the level of dissatisfaction with his actions among the population. Of course, we are talking only about democratic countries where there are opposition forces, and all power is not concentrated in the hands of one person. America is such a country, thus, the opinion of their media can be trusted. Also, there is the opposition, there are a huge number of high-ranking officials, and all of them are not afraid to express their opinions and criticize the government, because they do not dance to the tune of one person or a group of people. Let us go back to Donald Trump. In articles on the pound/dollar, we regularly "update" the "list of Boris Johnson's victories". In principle, if you want, you can make a similar "list of victories" of Donald Trump. Only in the case of the American president, this list will also include items that do not correspond to the statements and promises of the leader of the American nation. For example, about the fight against the "coronavirus", the confrontation with China, the situation with the impeachment, and blackmail of the President of Ukraine can be written down as a liability to Trump. And this is just the first thing that comes to mind. You can also recall Trump's repeated statements about "the maximum growth of the US economy in the entire history of the country" and "a brilliant new era". However, the US president naturally does not mention the fact that the growth of all economic indicators began under Barack Obama, and only continued under him. Therefore, the foundation was not laid by Trump. Well, Americans will remember the "brilliant new era" for a long time. And we are still deliberately not delving into more internal issues and problems, like health care reform, which, according to everyone, "flourished" under Barack Obama and "withered" under Donald Trump. The fight against the "coronavirus" has already resulted in the loss of more than 210 thousand Americans. Anthony Fauci, the chief epidemiologist of the United States, who warned from the very beginning about the highest danger of COVID-2019, predicts 400,000 deaths from this virus. And Donald Trump, meanwhile, continues to urge not to be afraid of the "Chinese virus" and compare it to the flu. At the same time, Trump continues to accuse China of "releasing this infection", and therefore contradicts himself. If "the virus is not to be feared", then why blame China so much if "the virus is not so dangerous"? However, contradictions are an integral part of the essence of the Trump administration.

Further, the trade war with China has failed. The American president wanted to achieve a reduction in the trade balance with China, but, as official statistics show, the trade deficit with China has not decreased much since the beginning of 2018. And if you take the overall US trade deficit, it has increased even more during the four years of the Trump administration. While China's trade surplus increased. Various analytical agencies and publications make various calculations and conduct analyses, according to which it is extremely difficult to find at least one point on which America would benefit from a confrontation with Beijing. About 300,000 Americans lost their jobs due to the trade war. China's purchases of American goods fell by 30%. Also, Trump continued to fight with China not only on the economic front. "The Hong Kong issue", "the Xinjiang issue", the fight against TikTok, the closure of Chinese consulates in the United States, and sanctions. What's the use of all this?

Well, there is no need to talk about politics at this time. The power struggle has always been and always will be in any country. However, in key issues and in the most difficult times, all the opposing forces must unite and help their country and their economy. What do we see in the US? The Democrats' four-year war against Trump. Not "against the Republicans," but "against Trump". Now there are three weeks left until the elections, and we can say with confidence that until the issue of power is resolved in the country, it makes no sense to expect a strengthening of the US currency. Just because Donald Trump in 2020 is personified with the fall of the American economy. 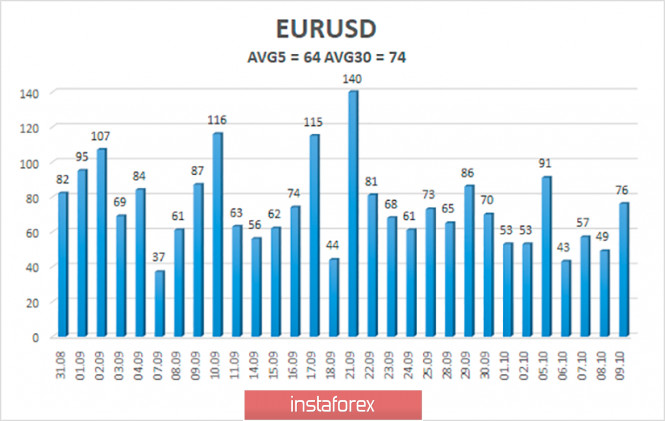 The volatility of the euro/dollar currency pair as of October 12 is 64 points and is characterized as "average". Thus, we expect the pair to move today between the levels of 1.1761 and 1.1889. A reversal of the Heiken Ashi indicator down may signal a new round of corrective movement.

The EUR/USD pair continues to be located above the moving average line and continues its upward movement. Thus, today it is recommended to keep open long positions with targets of 1.1841 and 1.1889 until the Heiken Ashi indicator turns down. It is recommended to consider sell orders if the pair is fixed below the moving average with the first targets of 1.1719 and 1.1658.

Interesting? Write a comment below.
 #Overview of the EUR/USD pair. October 12. Displeasure and constant criticism from the markets and the media, as the main
Forward 
Backward 