Overview of the EUR/USD pair. October 14. Donald Trump wins the battle for the Supreme Court of the United States and Joe 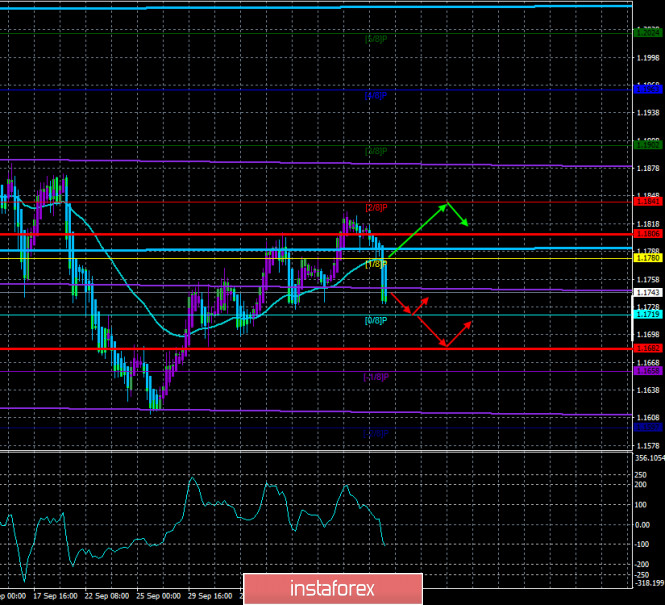 For the EUR/USD pair, the second trading day of the week again passed in fairly calm trading. On Tuesday, October 13, a new round of corrective movement began, which even turned into a collapse of quotes in the afternoon. However, in general, all trades in recent months continue to pass between the levels of 1.1620-1.1940. Of course, for a one-week cut, this is quite a lot, however, for two and a half months, it's not much. This is how much the pair's quotes are in the specified range. Thus, there is no formal flat at this time. Since there are no clear borders of the side channel. If you look at the 24-hour timeframe, you can even conclude that the downward trend is very weak. However, this does not change anything. The main thing is that trading takes place in a very narrow range, thus, there is no trend as such at this time.

The fundamental background at the beginning of a new week also remains the same - without changes. There is no news on the topic of negotiations between Democrats and Republicans. There is also no new data on the topic of elections and the election race. In fact, traders receive the same news every day. The US dollar has risen in price over the past day, but nothing changes for it globally. And what can change if there is still no positive news from the US? According to the latest information from US news agencies and TV and radio companies, Joe Biden continues to increase the gap from Donald Trump three weeks before the election. The most interesting thing is that the Democrat does nothing special for such popularity among the people. Recent research shows that Biden has almost the highest ratings among all presidential candidates since 1936. What does this mean? About Biden being so good? Or Trump is so bad. Trump has lost almost every battle as President of the United States. At least, those that are known to the whole world. It is possible that Trump also worked for his own well-being, as a true businessman, however, we do not know this and it is not for us to judge. Most importantly, Trump lost the battle against the "coronavirus", the battle against China, and won the battle against the Democrats only at the expense of more Republicans in the Senate, which could turn into his impeachment. The most interesting thing is that Trump did not understand that in order to please the voters, you need to make the lives of these very voters better. Let's face it, in the first three years of Trump's presidency, the standard of living in America grew, macroeconomic indicators grew, however, Trump's policy was aimed primarily at making the rich richer, and not at the middle and lower class of Americans. Well, the epidemic and the crisis that happened in 2020 only finished off the results of Trump's presidency for four years. Perhaps, without the crisis and the pandemic, the results would not have been so bad. However, the most important thing that the current president has not yet understood is that not only the results are important, but also how you achieved them. Trump has been at war with anyone who refused to accept his point of view throughout his term as president. In the end, he turned half the country against him. He is criticized by the Democrats, disliked by the Pentagon, ignored by the Fed, denied by the country's chief epidemiologist, Anthony Fauci, criticized outside the United States, constantly quarrels with journalists, and constantly insults everyone who asks him uncomfortable questions and points out his mistakes. That is, even if there were no pandemic and crisis, half of America would still be against Trump.

And even now, with the election only three weeks away, Trump is directing his forces to populism (the story of the miraculous recovery from the "coronavirus") and the war for the US Supreme Court. We have repeatedly said that the elections will most likely not end at the polling stations. On November 3, chaos is possible, some sections may be disrupted, anything is possible. And almost no one doubts that Trump will appeal to the Supreme Court if he loses the election. That is why he is in such a hurry to appoint "his" judge to replace the untimely deceased Ruth Ginsburg. On Monday, the Senate select committee began hearings on the confirmation of a new member of the Supreme Court, Amy Coney Barrett, a protege of Trump. If she is appointed to the position despite all the efforts of Democrats to postpone this process to a later date, the position of Republicans on the Supreme Court will be strengthened many times. After all, six of the nine judges will be appointed to their posts by Republicans.

In this situation, Biden has only one choice. And this is not the hope of a fair trial. The 78-year-old Democrat needs to win the election by a wide margin. And this option now seems more likely and less difficult than trying to win the court from the Republicans. The fact is that if Trump loses several key and controversial states at once, no court can declare illegal or rigged elections in all these states. As practice shows, the court can consider claims for one to two states. And if a review of the vote in these states is enough for Trump to win in the end, then we have bad news for the Democrat. But if the revision of the results for one state is not enough to change the overall picture, then Trump will have nothing to hope for. Because even a court made up of nine Republicans cannot simply overturn the results of the voting in those states that Trump points the finger at.

This is all bad news for the US dollar paired with the euro. The more uncertainty, the worse. Yesterday the US dollar slightly strengthened its position, but in the overall picture of the situation, such growth is nothing more than market noise or just one turn inside the 320-point side channel. We do not put an end to the US currency, however, its prospects remain very vague. 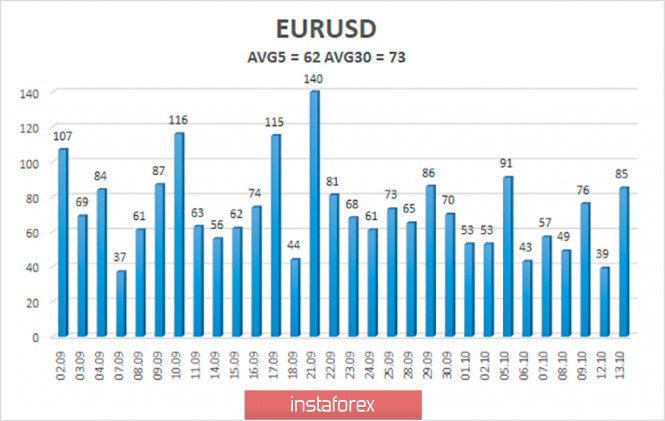 The volatility of the euro/dollar currency pair as of October 14 is 62 points and is characterized as "average". Thus, we expect the pair to move today between the levels of 1.1682 and 1.1806. A reversal of the Heiken Ashi indicator back to the top may signal a round of upward correction.

Interesting? Write a comment below.
 #Overview of the EUR/USD pair. October 14. Donald Trump wins the battle for the Supreme Court of the United States and Joe
Forward 
Backward 