Overview of the EUR/USD pair. October 15. Republicans could lose their majority in the Senate. 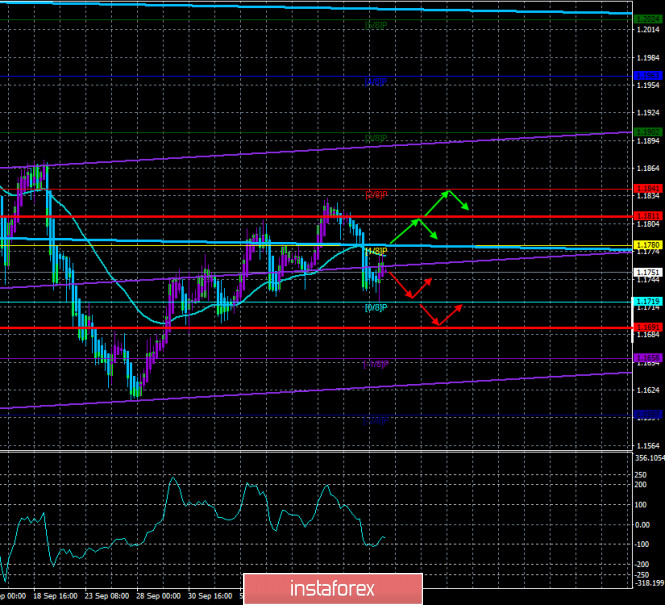 For the EUR/USD pair, the third day of the week was again held in relatively calm trading, although the pair was losing its positions quite cheerfully a few days earlier. The US dollar took the initiative from the European currency, however, there are big doubts about that for a long time. After all, the fundamental background for the US currency remains quite strong and not in its favor. As before, things are moving smoothly towards elections, the results of which cannot be predicted with a 100% probability. Still, Democrats and Republicans cannot agree on a new package of stimulus measures, which slows down the recovery of the American economy. Thus, the strengthening of the dollar may be only corrective and temporary. Even though the European currency has risen in price by 1,300 points in the last six months, it remains the leader in the pair with the US currency. Thus, despite overcoming the resistance, the price may stop falling soon and resume its bullish trend.

All conversations concerning America are still connected with the presidential election. Maybe someone has already had enough of this topic, and someone considers it not the most important for the currency market, however, there is no denying the fact that the new president will determine the country's recovery and development in the next four years. Its foreign and domestic policy will depend on it. And thanks to Donald Trump, the whole world realized how important it is to be able to negotiate with your partners and competitors, and not just put pressure on them, and then declare that everyone in this world "treats America unfairly". Trump's political ratings continue to fall, and we talked about this a few months ago. They said that it is impossible to remove responsibility from Trump for what is happening now in America and shift it to China. We believe that everything in this world is interconnected, thus, the results of the government that Trump has now are fully deserved results. After all, isn't it surprising that the "coronavirus" that escaped from China dealt the most severe blow to the States that provoked the trade war with China? We are not saying that a trade war could have been avoided if Trump had not been president. Probably not. But perhaps it would have been more civilized?

As we have already said, the political ratings of the current US President continue to fall, and Joe Biden – to grow. Although Biden himself does almost nothing to increase his popularity. But since there are only two candidates, if the popularity of one falls, the popularity of the second increases. Thus, Biden owes his popularity primarily to Trump. Such is the paradox. And along with this paradox, there is another very interesting fact. If Trump suffers not just a few "electoral votes" in the election, but a major defeat (and this is what the results of most opinion polls and research now indicate), this may mean that the Republicans will lose not only the president but also the majority of seats in the US Senate. How does it work? On November 3, not only presidential elections will be held, but also elections to the Senate and the House of Representatives. Of the 100 senators who are represented in the Senate, 33 will be re-elected. Thus, the Democrats, who are currently several votes behind in the Upper House, can also overtake the Republicans. Research shows that over the past 10 years, Senate elections in all states of the country were held a total of 139 times, and in 88% of cases, the winners of the elections were the candidates of the same party who won the last presidential election. There is even a forecast that according to the results of the Senate and presidential elections, the number of seats in the Senate for Democrats will be 51, that is, in any case, more than for Republicans. And this is almost total control over the country, as Boris Johnson has in the UK, who managed to form a "majority government".

If in the UK, people voted for Johnson and the Conservatives "just to finish Brexit faster" (which they may regret now) last year, then Americans can vote for Biden and Democratic senators "just not to vote for Trump". All the latest social studies and statistical simulations show that Biden will not just win, but will win by a significant margin. It is expected that he will get 370-400 "electoral votes" with the necessary 270. Well, Donald Trump, in our opinion, is currently trying to "catch up with the outgoing train". Throughout 2020, the most important year in terms of future elections, the US president made absurd statements, made mistakes and miscalculations, and did not inspire any confidence either by his actions or by his statements. Therefore, his last sluggish attempts to prove that the "coronavirus" is not so terrible, that the Americans are waiting for a new "Golden era" with him, and so on, are already of very little importance. We also support the general opinion that Joe Biden will win, and even the appointment of another Republican chief justice will not help Donald Trump since the case is unlikely to reach the courts if the Democrat wins by a large margin.

And for the US currency, all this means that times are changing from dark to light. Of course, it is impossible, especially now, to say unequivocally that the country will flourish under Biden. However, there was a rise under Barack Obama (a Democrat), and Joe Biden was the Vice President under Obama. Therefore, we can assume that the economic, epidemiological, and foreign policy situation will improve under a Democrat. Thus, the US currency may even begin to be in demand if the probability of a Biden victory continues to remain high. It should be noted that even the first round of TV debates did not help Trump increase his ratings. Most likely, the same thing will happen in the third round (second = canceled). Trump simply does not have any trump cards that he could use in the fight against Biden. Therefore, he can only exert moral pressure, interrupt, threaten, in general, do everything that he has done over the past 4 years. 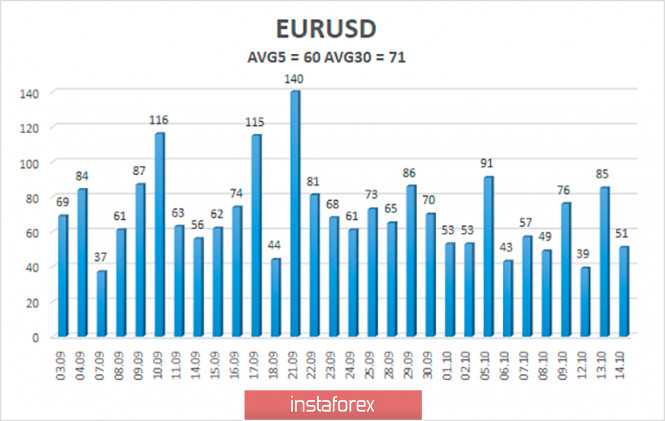 The volatility of the euro/dollar currency pair as of October 15 is 60 points and is characterized as "average". Thus, we expect the pair to move today between the levels of 1.1691 and 1.1811. A reversal of the Heiken Ashi indicator back down may signal the resumption of a downward movement.

Interesting? Write a comment below.
 #Overview of the EUR/USD pair. October 15. Republicans could lose their majority in the Senate.
Forward 
Backward 