Overview of the EUR/USD pair. October 16. Biden increases the gap to Trump. Republicans are setting up their own voting boxes 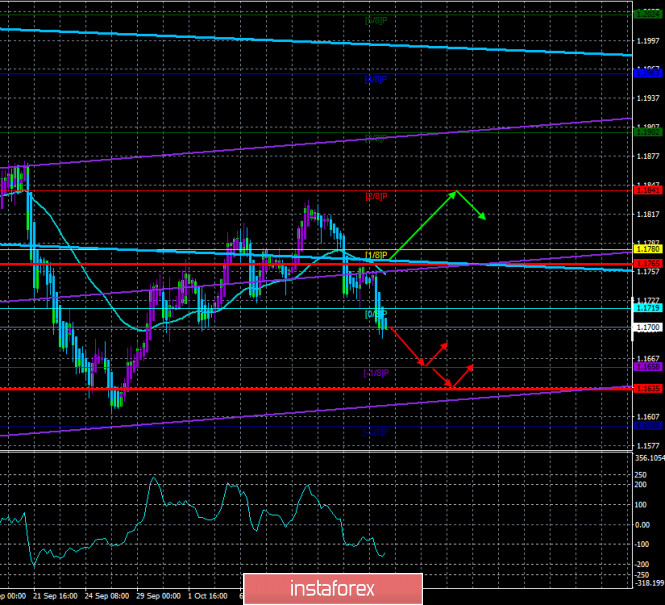 For the EUR/USD pair, the fourth trading day of the week was more active than the previous few days. The US currency continued to strengthen against the euro, however, it still does not give the impression of a stronger currency, which could become more expensive in the long term. All movements of the last weeks and months still fall best under the meaning of the word "flat". Even if this "flat "is not accurate and clear, nevertheless, the euro/dollar pair has been trading mostly sideways for the past almost three months, thus, the current drop in the euro currency quotes by "as much as" 140 points may be a simple noise inside the very side channel that we have already mentioned several times. And if so, it makes no sense to look for the reasons for the fall or growth of the US currency now. It should be clearly understood that if there is no news or traders ignore them, this does not mean that the pair will not trade at all. In any case, there are commercial transactions in the foreign exchange market for the purchase and sale of all currencies for the current needs of commercial banks, central banks, large companies, and enterprises. This means that in any case, the pair will not move sideways in the 20-point range. However, is it possible to conclude that the growth of dollar quotes by 100 points is a consequence of some political or macroeconomic process or event? At this time, this is exactly the situation in the foreign exchange market. All macroeconomic statistics are ignored, and market participants who trade for profit simply do not know what to expect from the US dollar and what the future holds for the US economy. This is why the pair has been trading in a very narrow price range in recent months. If the second currency was, for example, the pound, then trading would be much more trending, since the UK now has its factors that have a significant impact on the mood of traders. That is why we believe that the most important thing for the dollar right now is the presidential election, which is less than three weeks away.

Moreover, there is a lot of news about the US election. First, it should be noted that the presidential election has already begun, as more than 15 million people in America have already voted early. These people have already decided on their choice and do not want to wait for November 3. This is quite possible, however, never before has such a large number of voters voted ahead of schedule. The American newspaper The Washington Post reports that the majority of those who voted chose Joe Biden. Thus, if you count the votes now, Biden is already the leader. It is reported that a disproportionately large number of women and black citizens, who make up the majority of Joe Biden's electorate, came to the polls. However, these preliminary voting results should not be misleading, as most Trump supporters will be voting on November 3. It is even possible that Biden decided to play it safe and asked his voters to vote in advance to avoid possible trials and falsification of the vote count. Also, Trump has repeatedly stated that voting by mail can take a very long time due to the long counting of votes. Thus, Biden makes the task of election commissions somewhat easier, since his supporters began voting three weeks before election day.

Meanwhile, new results of opinion polls conducted by major magazines and TV companies have arrived. So, according to various data, the advantage of Joe Biden over Donald Trump is now from 11% to 17%. Thus, according to the results of various opinion polls, it can still be concluded that the Democrat's advantage continues to grow. Experts also calculated that Biden has almost the biggest advantage over his competitor three weeks before the election in the history of opinion polls, that is, since 1936. As you can see, Trump's position is not the most enviable and is not improving. Meanwhile, Trump himself began to use campaign slogans that perfectly show his current low support. "People are fleeing California. Too high taxes, too high crime, too many failures, too strict quarantine. Vote for Trump, what the hell do you have to lose!", Trump wrote on Twitter, referring to the residents of California.

Well, of course, now, three weeks before election day, it is not without "tricky tricks" from the Republicans. Many experts and the candidates themselves believe that the key to the vote will be the state of California, which gives 55 "electoral votes" at once - the largest number among all the states of America. Thus, figuratively speaking, Biden can win in a dozen states with the number of "electoral votes" from 3 to 7, and Trump, having won in California, will cover ten "Biden" states with one state. Thus, the fight for California will not be a joke. Moreover, California is one of the controversial states, that is, where there is no unequivocal support for Biden or Trump. Thus, it is in it that plus or minus 100 thousand voters can change the result of all elections. And in this state, the Republicans have begun to place their bins for the collection of the ballots. No article in state law prohibits a particular party from placing additional ballot boxes. There is only a ban on forging ballots. However, California Secretary of State Alex Padilla believes that only officials who are responsible for the election process have the right to place additional boxes. The essence of the entire Republican game is clear as day. Under the pretext of accusing the Democrats of possible fraud and because of distrust of them, they want to bring chaos to the states and cities that are governed by the Democrats. To confuse them as much as possible. However, this is not even news. Trump has hailed states and cities run by Democrats throughout his presidential term. And the Democrats themselves said a few months ago that Trump and his team would try to disrupt elections in those cities and states that are not "Republican". In general, the ballot boxes and boxes from the Republicans are only the first steps on the way to November 3. 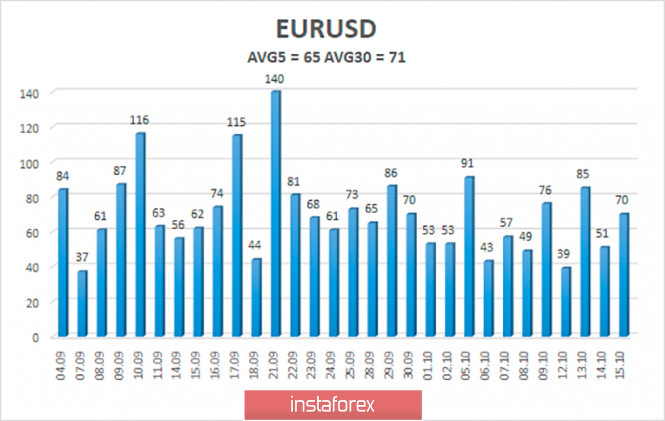 The volatility of the euro/dollar currency pair as of October 16 is 65 points and is characterized as "average". Thus, we expect the pair to move today between the levels of 1.1635 and 1.1765. A reversal of the Heiken Ashi indicator upward may signal a round of upward correction.

The EUR/USD pair continues its downward movement. Thus, today it is recommended to leave open sell orders with targets of 1.1658 and 1.1635 until the Heiken Ashi indicator turns up. It is recommended to consider buy orders if the pair returns to the area above the moving average with the first target of 1.1841.

Interesting? Write a comment below.
 #Overview of the EUR/USD pair. October 16. Biden increases the gap to Trump. Republicans are setting up their own voting boxes
Forward 
Backward 