Overview of the EUR/USD pair. October 19. Europe is covered by the "coronavirus". The US continues to prepare for the elections. 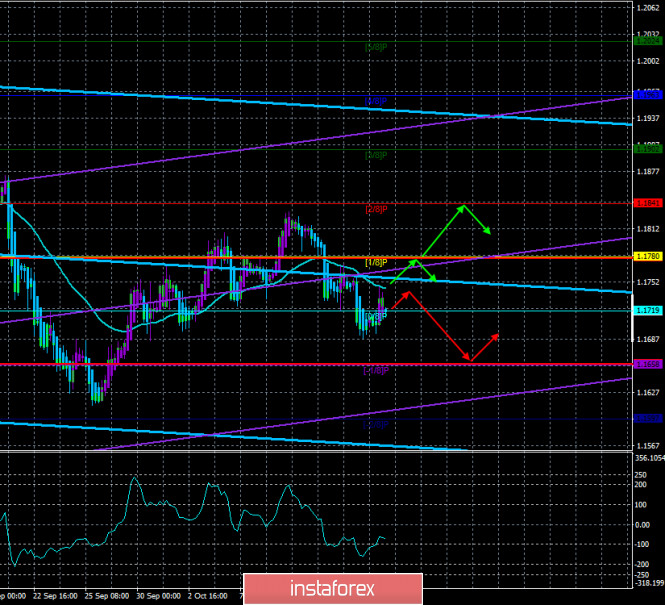 For the EUR/USD pair, the last trading day of the past week was again very quiet. Three of the last five business days ended with a volatility of 52 points or less. This is not much even for the euro/dollar pair, which has never been highly volatile. Thus, we can say that traders are not very willing to trade now. And first of all, this applies to major professional traders, because they set the tone for trading. This may be due to the upcoming US elections or it may be due to the generally unfavorable situation in both the US and the EU. One way or another, the pair continues to trade rather sluggishly, inactive and is still in a side-channel about 300 points wide. That is, if in the most short-term prospects (for example, on the hourly chart) you can still find a trend and work it out, then from the perspective of the 4-hour chart and above, the trend has been absent for several months. Market participants still do not want to risk making large or long-term purchases of the US currency, because no one knows who will win the US election. This will affect the economy, politics, and foreign economic policy of the country with the largest economy in the world, which in one way or another affects all other countries of the world and their economies. As for the euro, traders continue to be afraid to buy it due to the fact that since April, it has already risen by 1300 points (not counting the pullback) and continues to trade near two-year highs. Moreover, a full-scale second "wave" of COVID-2019 has now begun in the European Union. And this is a problem for the European Union and its economy, which has just begun to recover from the crisis of the first "wave" of the pandemic.

In general, now it is difficult to give the advantage of one of the currencies of the EUR/USD pair. And the key topic for the pair is still the topic of the presidential election, although it does not have any immediate impact on quotes and the mood of traders. The election is about 2 weeks away, and the situation with the ratings of Joe Biden and Donald Trump does not change. All opinion polls suggest that Biden is leading by at least an 11% margin. All forecasts say that Biden will win with a probability of at least 80%. That's a lot. And even on issues such as the economy, most Americans no longer trust Trump, although, throughout his presidential term, the economy was considered his strongest trump card. However, times are changing, and the attitude of Americans towards the President is also changing when America experienced one of the most severe economic collapses in its history. We will not once again list the "merits" of Trump since we have already said this many times. By and large, it doesn't make much difference to the US dollar who becomes the next President. After all, there are no "convenient" or "inconvenient" presidents for the currency. The question is about a number of different factors that affect exchange rate formation. And all these threads in the US lead to the President and the Fed since the Fed in America is not subject to the White House. And how many factors are outside the United States? For example, paired with the euro currency to the European Union. Thus, it is impossible to say that if Joe Biden wins the presidential race, the US dollar will immediately perk up and begin to actively rise in price. Maybe this will be the reaction of the markets in the first week or two, but no more. Joe Biden, as well as Trump, by the way, may be an adherent of the "cheap" dollar. And given the huge US government debt and the trade war with China, Washington will benefit from the cheapest possible dollar. However, at the very beginning of his presidential term, Trump set out to devalue the US currency. And it didn't work out. Thus, the election is just one of the factors that will affect the US dollar exchange rate in the next 4 years.

Meanwhile, protests against Donald Trump have begun in America. American media reports that at least 100,000 people in all states of the country on Saturday, October 17, took part in movements against the current US President. It is also noted that most of the protesters are women. Demonstrators carried placards criticizing Trump and his Deputy, Mike Pence. Also, criticism related to Trump's desire to appoint Amy Connie Barrett instead of the deceased Ruth Ginsburg (US Supreme Justice).

As for the macroeconomic news, they simply do not exist now. And all macroeconomic statistics will continue to be strenuously ignored by traders. Republicans and Democrats have failed to agree on a new stimulus package for the US economy, which is why unemployed Americans and businesses are suffering. However, it seems that both sides are not very eager to agree on a new package of stimulus measures. As we have stated many times, everything in America is now viewed through the lens of elections. Thus, both sides want such a large-scale bill as a multi-trillion dollar package of assistance to the economy to improve the position of their candidate in the elections and do not allow a competitor to gain a few additional percent of support. For example, Donald Trump wants every unemployed American to receive a "coronavirus surcharge" of $ 1,200 in a check with their signature. Such a populist step is a desire to improve their positions before the elections. House Speaker Nancy Pelosi, who is one of the most ardent opponents of Trump, even gave the White House a 48-hour deadline after which the parties must agree on the issue of supporting the economy. Otherwise, the negotiations will be completed. Recall that the Democrats are pushing for $ 2.2 trillion in aid to unemployed Americans and businesses. Republicans do not agree to such an impressive package and offer no more than 1.8 trillion, although their initial offer was much lower.

From a technical point of view, the euro/dollar pair continues to be located below the moving average line, however, the downward trend is so weak and uncertain that the pair may at any time consolidate above the moving average. It is also worth noting that last week traders again failed to go below the level of 1.1700, which for a long time was the lower limit of a clear side channel. 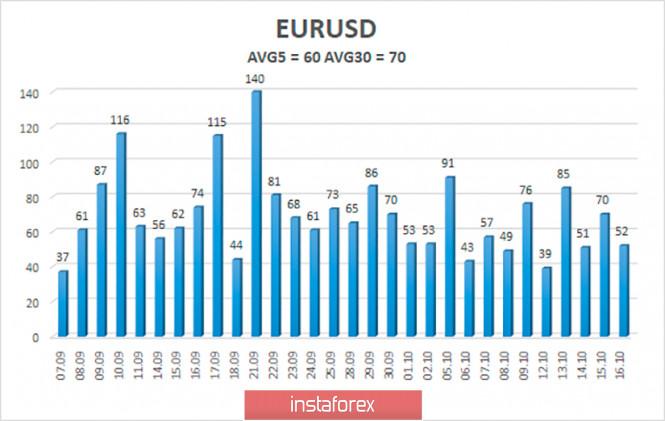 The volatility of the euro/dollar currency pair as of October 19 is 60 points and is characterized as "average". Thus, we expect the pair to move today between the levels of 1.1659 and 1.1779. A reversal of the Heiken Ashi indicator down may signal the resumption of a downward movement.

The EUR/USD pair has started a round of corrective movement. Thus, today it is recommended to open new sell orders with a target of 1.1658 as soon as the Heiken Ashi indicator turns down or the price bounces off the moving average. It is recommended to consider buy orders if the pair returns to the area above the moving average line with targets of 1.1780 and 1.1841.

Interesting? Write a comment below.
 #Overview of the EUR/USD pair. October 19. Europe is covered by the "coronavirus". The US continues to prepare for the elections.
Forward 
Backward 