Overview of the EUR/USD pair. October 2. Trump awarded himself a victory in the debate. 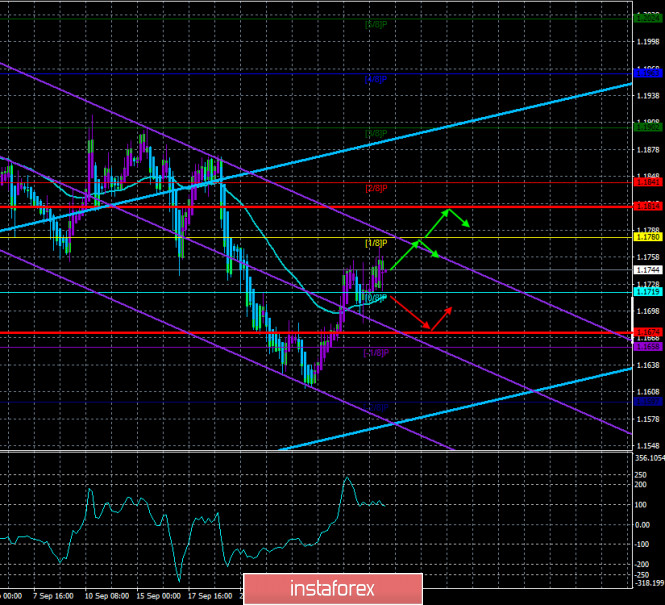 On October 1, the European currency paired with the US dollar continued fairly calm trading. Market participants still do not understand why they should force events, as well as which way to trade the pair now. The problem lies in the same fundamental background. For the US currency, it remains extremely weak, dangerous, and the future is uncertain. For the European currency, the fundamental background is more favorable, however, all the negative from overseas has already been worked out by traders several times (the pair's rise by 1300 points in the last 4 months), and we can't wait for a super-positive from the European Union either. Therefore, there is a stalemate in which market participants are very reluctant to trade, moreover, they are trying to return to the side channel of $ 1.17- $ 1.19, in which they spent about two months.

Meanwhile, US President Donald Trump evaluated the past first round of debates with his opponent Joe Biden. According to Trump, "he enjoyed the debate". "The verdict is out, and they say we won a major victory last night," Trump said. As usual, it is unknown who made such a verdict. However, Trump is confident of his victory despite the results of opinion polls that indicate a victory for Joe Biden. The US leader also believes that he brought Biden to justice "for all 47 years of lies, betrayal, and failures". And again, it is unclear how he brought the Democrat to justice. The US President also noted that the TV debate ratings were the highest in the country's history. We can say that this is not surprising, since the upcoming elections promise to be the most interesting in the history of the country.

At the same time, Democrats and Republicans in the faces of Nancy Pelosi and Steven Mnuchin continue to work on a new stimulus package that they cannot agree on. The situation with the new aid package is beginning to resemble the negotiations between London and Brussels. No one wants to give in on the most important issues, but both sides say they want to reach an agreement. The stumbling block is the scale of the aid itself. Democrats offer a minimum of 2 trillion, Republicans believe that one trillion is a lot. Thus, the negotiations stalled in fact on this issue at the beginning of August. According to the latest information, Democrats are preparing to submit a new $ 2.2 trillion stimulus package to Congress. What's the point if Republicans think it's too much and won't approve of it? Earlier, the Republicans themselves put forward a $ 300 billion aid package for consideration, which was rejected by the Democrats. "We are both working hard to achieve results. We are trying to understand whether we will be able to do this, and if not, we need to move on," Mnuchin said, expressing hope that an agreement will be reached.

Meanwhile, another speech by ECB head Christine Lagarde clarified some aspects of future monetary policy. It seems that Lagarde decided to follow in the footsteps of the Fed and introduce so-called "compensatory inflation". In other words, inflation will be allowed to go above the 2% level, which is the target for both the Fed and the ECB. It is when this level is reached over a long period that both central banks are ready to tighten monetary policy. Another thing is that monetary policy in the EU has not been tightened since 2012. Thus, Lagarde's statements about achieving and exceeding 2% inflation even sound like a mockery. Moreover, deflation is now registered in the EU, that is, prices are falling, not rising. "Although compensation strategies may be less successful when people are not completely rational in their decisions, the feasibility of such an approach can be studied," said Christine Lagarde.

Interesting news, but what about the euro/dollar pair itself? What are its prospects for the near future? In the European Union, everything now depends on the "coronavirus" epidemic and the scale of its second "wave". If the second "wave" is stronger than the first, then a new "hard" quarantine and even a "lockdown" is possible. And this, of course, will harm the bloc's economy. Although all macroeconomic indicators are ignored by market participants, they are now linked to the "coronavirus crisis". As for the US, the fundamental background is much more diverse. First, if the second "wave" has just begun in the EU, then the first "wave" has not even ended in America. And this factor puts pressure on the US currency. Secondly, there may be a change of government in the United States soon. And before this very change of power, there may be fierce battles in the elections, and then in the courts. It's no secret that many investors and traders fear uncertainty. Therefore, the US dollar is now far from the most attractive currency. Also, many traders and investors fear that Trump will be re-elected for a second term. And many investors and traders are wary of the uncertainty surrounding TTrump's second term. Third, we remind you that the conflict with China has not gone away, it is only put on pause. Thus, immediately after the election or after a while, it can flare up with a new force. Of course, this will depend on who will be the next US President. If Trump, it will flare up again. If Biden, there are options. Thus, we believe that until November 3, the US dollar will remain under pressure from market participants and is unlikely to be able to strengthen much before this date. On the US currency side, there are only technical reasons. The technical picture now speaks in favor of continuing to strengthen the euro currency, as the price first overcame, and then rebounded from the moving average, and the Heiken Ashi indicator is directed upwards. 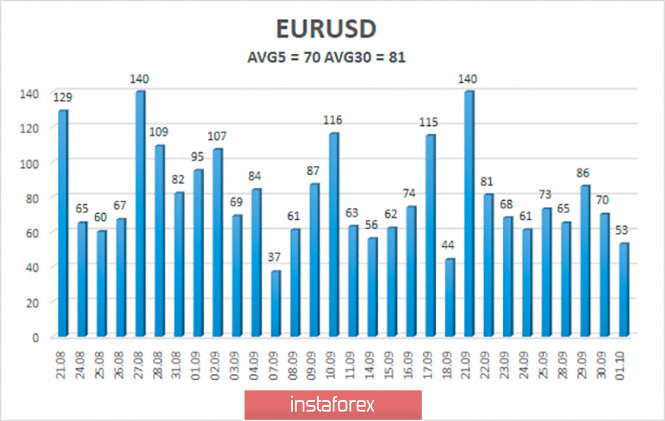 The volatility of the euro/dollar currency pair as of October 2 is 70 points and is characterized as "average". Thus, we expect the pair to move today between the levels of 1.1674 and 1.1814. A reversal of the Heiken Ashi indicator back down may signal a new round of downward correction.

Interesting? Write a comment below.
 #Overview of the EUR/USD pair. October 2. Trump awarded himself a victory in the debate.
Forward 
Backward 