Overview of the EUR/USD pair. October 21. Rules for TV debates between Trump and Biden changed. 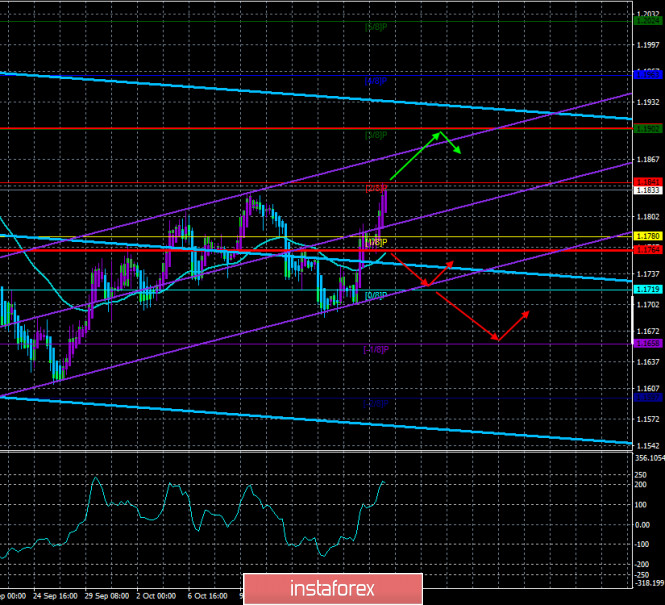 During the second trading day of the week, the EUR/USD pair resumed its upward movement. However, in general, trading continues inside the side channel, which we have repeatedly written about. Thus, in the long term, nothing changes for the euro/dollar pair, and the 50-60 points that the pair passes every day do not have any effect on the technical picture at all. By and large, the trend continues to reverse every few days. Thus, now, in principle, it is impossible to talk about any trend. Why is this situation now? Because America continues to prepare for the elections, which have already begun. Meanwhile, in Europe, a strong second "wave" of COVID-2019 has begun, which is unclear and unknown what impact it will have on the EU economy. Therefore, traders are cautious and they are waiting for the fundamental background to become a little simpler and clearer. In particular, we have repeatedly noted that before the end of the presidential election in the United States, it is unlikely to expect a strong strengthening of the US currency, because market participants simply will not risk investing in the dollar without knowing the name of the next president of the country. As for the European currency, its traders do not want to buy since it has already risen in price over the past six months by 13 cents and continues to trade near two-year highs.

Meanwhile, the third and final round of televised debates between Donald Trump and Joe Biden is scheduled for October 22. This will be the last face-to-face meeting of presidential contenders before election day. However, the new round will be supplemented with new rules, according to the decision of the commission on presidential debates. After the first round turned into utter chaos and was called a "disgrace" by many American media, the rules of TV debates changed. Now the microphone of one of the candidates will be turned off while the second candidate is speaking. However, only for a two-minute time slot at the beginning of each 15-minute round. The remaining thirteen minutes will be the debate when the microphones of both contenders will be turned on. According to media estimates, Trump interrupted Biden 71 times during the first debate. However, it is unlikely that the new rules will deter Trump from new attacks and provocations because this is part of his strategy in a face-to-face confrontation with Biden. The topics that the participants of the debate will have to discuss also became known. These are the fight against coronavirus, race issues, climate change, national security, and American families. It should be noted at once that the Trump campaign headquarters opposed any changes to the rules of the debate and demanded to change the list of questions to be answered by both candidates.

Also, Donald Trump got involved in a new conflict with the country's chief epidemiologist Anthony Fauci. However, the word "conflict" is not quite appropriate to describe what is happening. Trump simply insulted Fauci in his usual way, calling him an "idiot". According to the US President, if he listened to the advice of Fauci, the total death rate from the "coronavirus" would already be 700 or 800 thousand. Thus, Trump once again puts himself above the country's chief epidemiologist on an epidemiological issue in which he was most often misled. Recall that it was Dr. Fauci who repeatedly refuted the words of the US President. Fauci predicted 200,000 deaths in the country from COVID-2019 this spring. It recently changed its forecast to 400,000 deaths.

At the same time, the pre-election process in America is quite active. According to polling stations, about 28 million Americans have already voted, and in some states, there are even queues to go to the polls, despite the bad weather. Meanwhile, Trump himself continues to repeat the words about election fraud by Democrats. According to the current US President, fraud has already begun in some states, although Trump did not provide any evidence of his words. Meanwhile, a new batch of various sociological studies has arrived, which again showed that Biden leads by a margin of at least 11%. Thus, nothing changes in the balance of power before the election between the candidates.

However, traders are more interested in an agreement between Democrats and Republicans that will allow them to agree on a new package of stimulus measures for the American economy. Earlier, House Speaker Nancy Pelosi set a deadline for negotiations that expired just a couple of hours ago. Since there is no new information on this issue, it can be assumed that the Democrats and Republicans did not manage to reach an agreement. However, all US political forces have long been focused on the elections, which are two weeks away, and not on issues related to the country's governance. And market participants themselves also continue to ignore most of the macroeconomic and fundamental information. Otherwise, how can we explain the almost three-month movement of the pair in the 250-300-point side channel? We can only assume that traders are waiting. They are waiting for either the US election and the name of the next president, or any actions of major market players that can move the pair off the ground. One way or another, there is no trend in the long term.

From intraday trading, the upward trend is now maintained, as the price continues to be above the moving average line. However, we once again warn traders that it will be extremely difficult for quotes to leave above the level of 1.1900. And the level of 1.2000 now looks completely unattainable. Thus, we should not expect a strong strengthening of the European currency now. As for the US dollar, traders overcome the level of 1.1700, but even in this case, the bears' strength is not enough for further movement to the south. 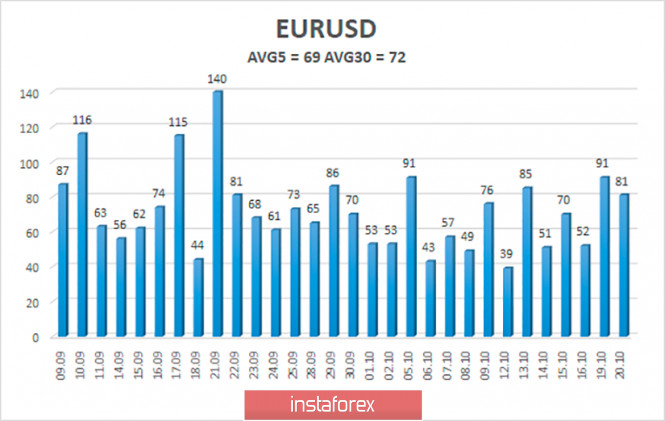 The volatility of the euro/dollar currency pair as of October 21 is 69 points and is characterized as "average". Thus, we expect the pair to move today between the levels of 1.1764 and 1.1902. A downward reversal of the Heiken Ashi indicator may signal a downward correction.

The EUR/USD pair continues its upward movement. Thus, today it is recommended to stay in buy orders with a target of 1.1902 until the Heiken Ashi indicator turns down. It is recommended to consider sell orders if the pair returns to the area below the moving average line with targets of 1.1719 and 1.1658.