Overview of the EUR/USD pair. October 22. Is there a real chance that Donald Trump will stay in the White House for another 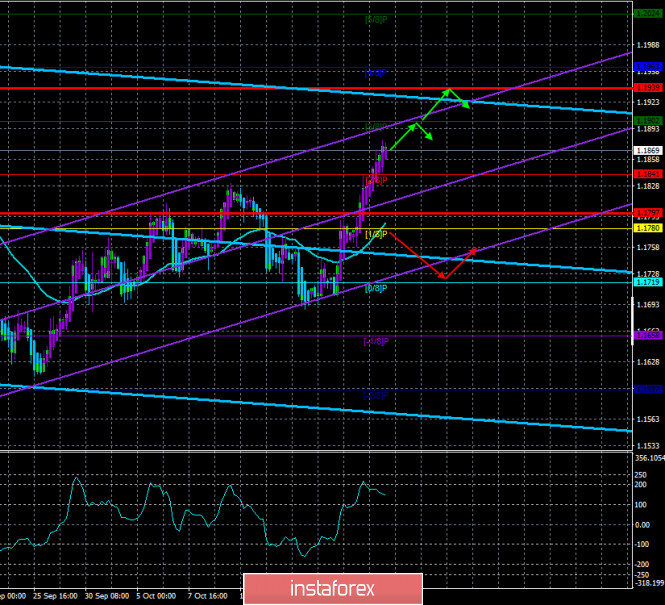 During the third trading day of the week, the EUR/USD pair continued its upward movement as if nothing had happened. Although the movement to the north continues for three consecutive days, there was no correction during this period, and the euro/dollar pair continues to trade inside the side channel. The only question is what are the boundaries of this channel. Perhaps this is 1.1700 and 1.1900 – the channel within which the pair has been trading for about a month and a half. It may be 1.1640-1.1920(1.1940). The pair's quotes have not been able to get out of this channel for almost three months. One way or another, however, the sideways movement is now visible to the naked eye. You only need to look at timeframes older than 4 hours. Thus, although at first glance the current upward movement is quite strong and pulls on the "trend", so far absolutely nothing has changed in the technical picture. At any moment, especially after reaching the level of 1.1900 or on the approach to it, the pair can turn down and start a new round of downward movement on the same side channel. The most important thing is that the fundamental and macroeconomic backgrounds do not have any influence on the pair's movement at the moment. Not for a long time. If the general fundamental background brought the euro to the current levels (two-year highs), then traders were not able to lead the pair over the past three months. Although there have been plenty of noteworthy events during this time. There is an opinion that most market participants simply do not want to take risks before the US presidential election. However, it should be understood that this is just an assumption. Therefore, we still recommend that you focus on technical factors when making trading decisions.

Most media and experts have already buried Trump's re-election chances. Support ratings have consistently pointed to at least a 10% gap between Biden and Trump for several months in a row. And the situation does not change. Moreover, various sociological models of respected publications and analysts also predict the victory of the Democrat, with a completely gigantic probability of at least 80-85%. A couple of weeks ago, some experts believed that Trump's only chance of winning was due to a lawsuit that could end the 2020 election. That is, Trump can freely appeal to the Supreme Court, saying that the election was rigged and demand an investigation. The laws do not prohibit this. Thus, purely hypothetically, the Supreme Court may side with Trump and declare the election invalid. However, first of all, it is unlikely that the court will recognize the elections as rigged by Democrats in all states of the country. That would be very strange and suspicious. Most likely, in our case, we will be talking about one or at most two states that give the largest number of "electoral votes". For example, Pennsylvania, Philadelphia, or California. However, the revision of the voting results in these states is enough to change the election results. For example, the number of electoral votes given by the state of Pennsylvania is 20, Philadelphia is 29, and California is 55. To win, a presidential candidate needs to get 270 votes. As you can see, if the gap in the election results between Biden and trump is less than 58 votes, then the revision of the results in just one state will lead to the opposite results in the election. And in this case, Trump needs the support of the Supreme Court. And he will have it because five of the nine Supreme Court Justices are Republicans, and Trump is going to appoint to the post the sixth judge before the election. Thus, 6 out of 9 judges can provide Trump with the necessary review of the results. Of course, it is not necessary that if the case goes to court, everything will turn out in favor of the current president. However, the probability of this is high, as in the case of impeachment, which was initiated by the Democrats, and which did not take place simply because the Republicans have a majority in the US Senate.

So far, the situation is not in favor of Trump. The situation with the" coronavirus", a huge number of false statements over 4 years, the trade war with China, in which it is the States that lose, the dark history of impeachment, constant wars with the Democrats, social unrest based on issues of racism, a record drop in the economy in 2020, a lost first round of debates with Joe Biden. It would seem that Trump has no chance of winning the election at all. Moreover, the elections have already begun, since in America it is allowed to vote early. Americans started voting early. And most of them are voting for Biden. And while Americans are voting for Biden, Republicans are placing their ballot boxes in the most important states, which is completely absurd. But Republicans and Trump understand that they can't win completely honestly and transparently, so they try to use any chance to win.

In principle, Trump has only one chance before the election to change the situation a little in his favor. Tomorrow in America, the last round of TV debates will take place, at which the president was advised by his campaign team not to interrupt Biden, to behave more politely, and to joke and smile more. Trump may be able to win back 1 or 2% of the electorate. However, we believe that it is unlikely. And it seems that the fate of the elections will be decided through the disputed states. And this is the only and main trump card of Trump. Biden needs a complete and unconditional victory so that the results of the largest states no longer matter. If he wins by more than 110 votes, then Trump is unlikely to help anything. If the margin in the most important and contested states is strong, then there will most likely be no review of the vote.

The US dollar continues to fall in price two weeks before the election, however, this may be completely unrelated to any fundamental data decline. We have already said that the pair simply continues to trade inside the side channel. The euro currency is growing now, and the dollar may start to grow in a couple of days. 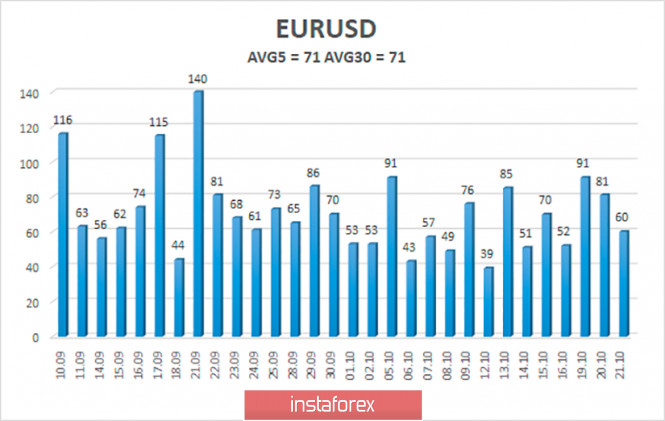 The volatility of the euro/dollar currency pair as of October 22 is 71 points and is characterized as "average". Thus, we expect the pair to move today between the levels of 1.1797 and 1.1939. A downward reversal of the Heiken Ashi indicator may signal a downward correction.

Interesting? Write a comment below.
 #Overview of the EUR/USD pair. October 22. Is there a real chance that Donald Trump will stay in the White House for another
Forward 
Backward 