Overview of the EUR/USD pair. October 26. Americans don't vote for Joe Biden. They vote either for Trump or against Trump. 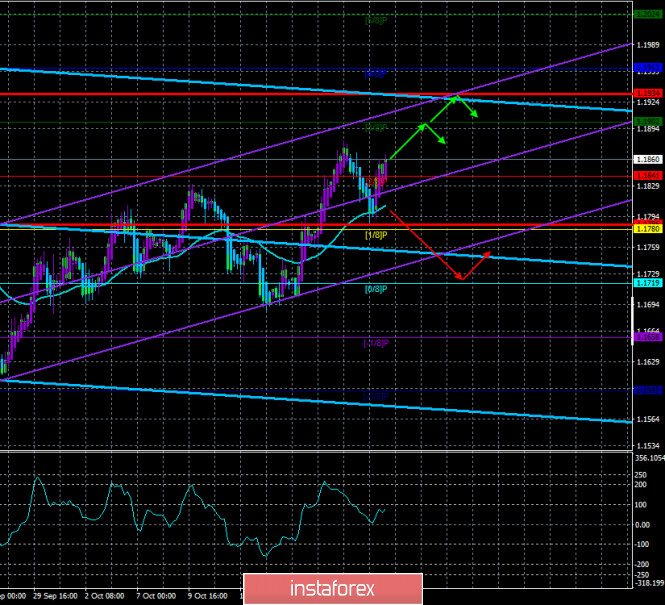 During the last trading day of the past week, the EUR/USD pair completed a correction near the moving average line, bounced off it, and resumed its upward movement. Thus, at the moment, we can say that the upward trend for the pair remains, but at the same time, we once again note that the price continues to move in the most long-term plan inside the side channel of $1.17-$1.19 (or 1.1640-1.1920). Thus, in the next few days, there may be a downward reversal and a resumption of the downward movement to the lower line of channel 1.1700. Accordingly, it is still impossible to talk about a full-scale trend now. Rather, these are micro-trends inside the side channel. Of course, the flat won't last forever. It will be completed sooner or later. If the pair's quotes manage to overcome the upper line of the channel, then a new full-fledged upward trend may begin to form. However, we still doubt that market participants will rush to buy the euro for no apparent fundamental reasons near its two-year highs. As for the US currency, we still do not consider its growth possible and probable before the elections on November 3.

There was very little news on Friday. By and large, the markets are already fully focused on the upcoming elections, as well as the candidates themselves and the entire country. At least, all other topics that worried traders and forced them to trade are put on pause. All three rounds of the debate between Donald Trump and Joe Biden have passed (except for the canceled second), so a week before the election, none of the candidates will be able to influence their political ratings. Although, by and large, none of the candidates has done anything in recent weeks to change these very ratings. We believe that if both presidential candidates had gone on vacation a couple of months ago, the balance of power a week before the election would have been the same as it is now. The fact is that Trump has already said everything he could say and do everything he could do. The "coronavirus" pandemic, which the US president treated from the very first day as a cold, constant statement about COVID-2019, which was criticized, refuted by all doctors, epidemiologists, and virologists. Yes, even ordinary Americans who do not have a medical education understand that more than 200,000 people do not die from cold in six months. Every American understands that the whole world is dealing with an epidemic. Only Donald Trump, who continues to make absurd statements with enviable regularity, does not understand this. For example, this weekend, he said at a campaign rally in Florida that "they (the government) are going to put a quick end to this pandemic". Earlier, Trump promised a vaccine. He also said that the virus will evaporate and disappear on its own, will not survive the summer, and so on. All of Trump's other "merits" stem from the pandemic. Record-breaking economic decline, record-high unemployment, total inability to work as a team with the Democrats. And also, a trade war with China, in which it is the United States that is losing. Thus, in four years, Trump has shown himself as president from all sides and most Americans do not even need new promises about the "Golden Age". They saw firsthand all of Trump's work and its consequences. As for Joe Biden, he didn't have to do anything at all. All he had to do was not make mistakes, not make unsubstantiated statements, and criticize Trump for a whole lot of mistakes he made. That's the whole recipe for winning the election. Of course, Biden hasn't won anything yet. However, all opinion polls continue to show record ratings for the Democratic presidential candidate.

Well, Trump can only continue to do what he did for four years. Criticize the media, try to blame others, or pretend that nothing terrible has happened, and a bright future awaits everyone, of course, with him at the head of the country. A week before the election, Trump recalled the activities of Hunter Biden and Joe Biden in Ukraine and China. Earlier, he failed to play the same card. No evidence of the Bidens' illegal activities was found, and there was not even a specific reason to launch an investigation. However, Trump continues to "trash" this card, trying to squeeze at least some dividends out of it. At first, he called on the FBI to launch an investigation against the presidential candidate and his son and to put both in prison. After that, he began to criticize the media for not covering the topic of Biden's corruption schemes enough and trying to hide them. At the same time, according to Trump, the media pays a lot of attention to the COVID pandemic, only scaring citizens.

Meanwhile, more and more foreign media support the view that the US election is not the election of Trump or Biden. This is the election of Trump or not Trump. In other words, the American people will decide whether they want Trump as the head of state, and if they don't, it doesn't matter who the other president is. We have repeatedly encountered this idea in one form or another. We have previously drawn parallels with the UK parliamentary elections that took place in December last year. Then the conservatives won by a large margin. We were and still believe that the British did not vote for the conservatives or labor. They voted for or against Brexit. Since it was the conservatives who proposed an early end to Brexit, that's why Boris Johnson's party won. It may be the same in America now. Biden can win, not because the Americans support him, but because they don't want new problems with Trump.

Well, for the US currency in terms of prospects, nothing has changed yet. Before the election, that is, at least a week, it is unlikely that the US dollar will become more expensive. It is possible, but only within the side channels that we discussed above. No one knows what will happen after the elections and when they will end at all. Therefore, any further plans and strategies should be made after the election is over and the results are announced. 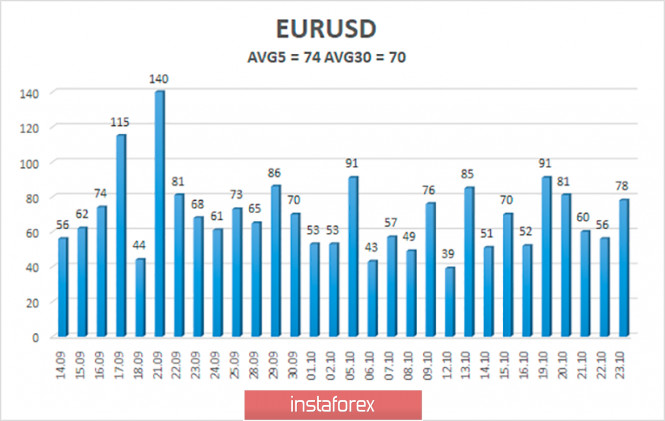 The volatility of the euro/dollar currency pair as of October 26 is 74 points and is characterized as "average". Thus, we expect the pair to move today between the levels of 1.1786 and 1.1934. A downward reversal of the Heiken Ashi indicator may signal a new round of downward correction.

The EUR/USD pair resumed its upward movement. Thus, today it is recommended to stay in buy orders with targets of 1.1902 and 1.1934 as long as the Heiken Ashi indicator is directed upwards. It is recommended to consider sell orders if the pair returns to the area below the moving average line with a target of 1.1719.

Interesting? Write a comment below.
 #Overview of the EUR/USD pair. October 26. Americans don't vote for Joe Biden. They vote either for Trump or against Trump.
Forward 
Backward 