Overview of the EUR/USD pair. October 30. The highest turnout of Americans in the election indirectly indicates the nation's 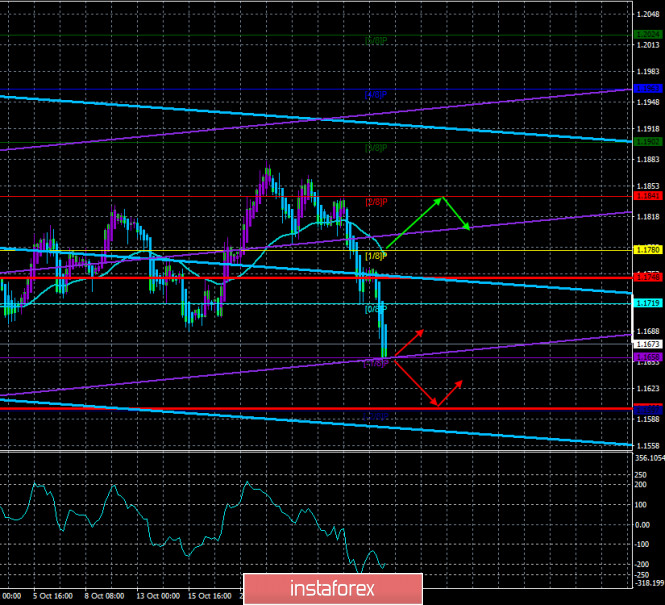 During the fourth trading day of the new week, the EUR/USD pair resumed its downward movement without any correction or upward pullback. It resumed and fell to 1.1700 during the day while remaining inside the same side channel of 1.17-1.19, in which it has been trading for about 3 months. So, by and large, nothing extraordinary happened again. The euro/dollar pair dropped to the lower line of the side channel. Now, it has an excellent chance of breaking this line, however, even now, when the pair has gone below 50 points, this does not mean an unambiguous end to the sideways trend. Earlier, the pair went below 1.1700, but then returned to the channel. Thus, it is possible that now the pair is waiting for something similar.

The main reason for the fall in the pair's quotes on Thursday was the US GDP report, which showed that the economy recovered by 33.1% in the third quarter, which is more than the losses of the second quarter. In real terms, the results of the second and third quarters still have a "minus", however, the pace of economic recovery impressed traders. Thus, the US currency forgot about the elections and the uncertainty factor of the future.

The second reason for the fall of the European currency on the penultimate trading day of the week was the statements of German Chancellor Angela Merkel and French President Emmanuel Macron about the introduction of new "lockdowns". Thus, the authorities of European countries did not wait for the health systems of their countries to collapse and introduced "strict" quarantines. However, as many experts note, "lockdowns" are still not as severe as in the spring. However, these are almost total quarantines, so the European economy may start experiencing problems in the near future.

In general, according to the results of Thursday, we can say the following: the American economy showed a really serious recovery rate, although the country remains the first in the world in the number of cases of "coronavirus" and the number of deaths from it. However, the European economy, thanks to the new "lockdown", will decrease almost 100% in the third quarter. Therefore, in just one day, the euro currency turned from a currency with good prospects for the coming months into outsiders. Of course, we should not forget that the American presidential election is still ahead, which is only a few days away. This is the topic that has kept market participants on their toes in recent weeks and even months, so it can hardly be said that now the markets have lost interest in this topic and it is no longer important and significant. Therefore, in the coming days, everything may still change. Do not put an end to the European currency in advance.

Meanwhile, Americans are showing how important the 2020 election is to them. At the moment, that is, four days before the official Election Day, 76 million people have already voted ahead of schedule, which is more than half of the total number of those who voted in 2016. As we have repeatedly said, there is a reason for this behavior of Americans. Judge for yourself, if it were "just another election", why such a sharp increase in voters? If Donald Trump had done a great job like Barack Obama did in his first four years, would there have been such a rush for re-election? We believe that Americans have become more active precisely because they understand that if they ignore the election, then Donald Trump may stay for a second term. We don't see any other explanation. That is why amid the second "wave" of the pandemic in the United States, when 70-80 thousand people fall ill every day, people are not afraid to leave their homes, go to the polls, stand in queues for several hours, and vote. Because unlike the Europeans, who began to introduce new "lockdowns" in their countries as soon as the "smell of fried", Trump is not interested in the health and lives of people. At least, all his actions and statements say exactly this. The US President is interested in the economy and business, his own business, which will begin to suffer serious losses if the country plunges into a second "lockdown". That is why the US President is doing everything he can to show that the "coronavirus" is not so terrible. What is the story with the "infection" of Trump himself and a miraculous cure in 10 days? We do not claim that the US President was not ill at all, however, we assume that this option is quite possible. Recall that, when Britain ended the first "wave" COVID-2019, the authorities even made timid attempts to motivate a healthy way of life of the British people. America is famous all over the world as "the nation with obesity". However, no steps were taken in this direction either. What is the output? The US President did not take into account the "coronavirus" from the very beginning. All the last 7 or 8 months, he shocked doctors and epidemiologists with his statements concerning COVID-2019, then offering to "enlighten the sick with a strong light source", then "pour a strong disinfectant inside", then simply stating that "the virus will magically disappear in April". Maybe in April 2021? And now Americans are going to the polls to "pay Trump in his coin". Of course, we are not saying that the outcome of the election is already a foregone conclusion, but from our point of view, the probability that Biden will become the new President is extremely high.

For the US currency, this factor does not mean anything. For the US dollar, elections, as well as all the possible problems that are associated with them (for example, legal proceedings that can be initiated by one of the candidates in case of defeat), are just a factor of uncertainty. Market participants do not want to invest in the dollar until it becomes clear and clear what is waiting for America in the next four years. 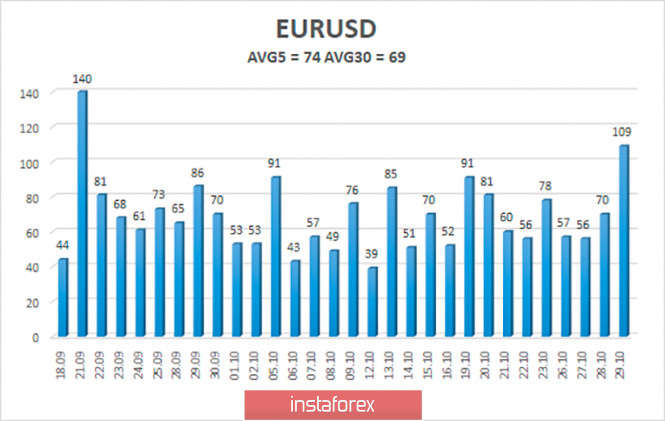 The volatility of the euro/dollar currency pair as of October 30 is 74 points and is characterized as "average". Thus, we expect the pair to move today between the levels of 1.1600 and 1.1748. A reversal of the Heiken Ashi indicator to the top may signal a round of upward correction.

The EUR/USD pair continues its downward movement and seems to have even overcome the important level of 1.1700. Thus, today it is recommended to support open sell orders with targets of 1.1658 and 1.1600, while the Heiken Ashi indicator is directed down. It is recommended to consider buy orders if the pair is fixed above the moving average line with a target of 1.1841.

Interesting? Write a comment below.
 #Overview of the EUR/USD pair. October 30. The highest turnout of Americans in the election indirectly indicates the nation's
Forward 
Backward 