Overview of the EUR/USD pair. October 5. Donald Trump is hospitalized. The situation with the elections and the future of 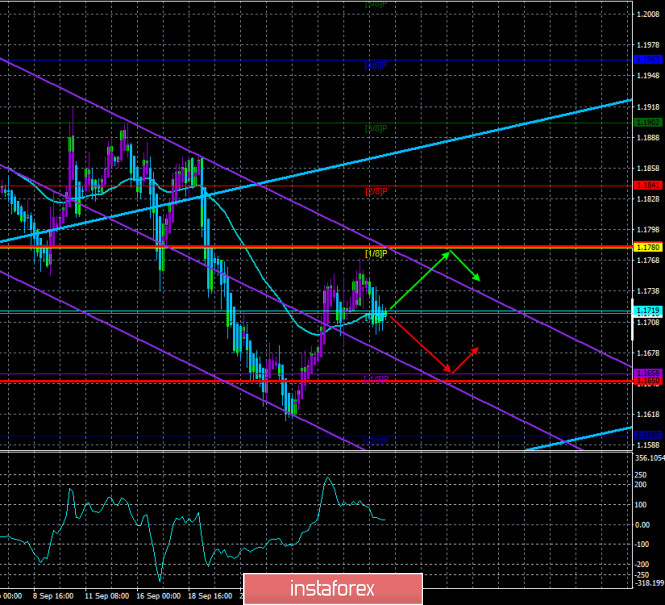 Last week, the European currency paired with the US dollar was able to strengthen by about one cent. This is not much, given the fact that the euro has risen by 13 cents over the past few months. The price rose so much that even the European Central Bank began to "sound the alarm", and its chief economist Philippe Lane and Christine Lagarde herself said several times publicly that the current euro exchange rate is too high, which creates additional problems for the economy and also slows down inflation even more. All this week's macroeconomic reports were ignored, as usual. Or the reaction to them was so weak. These are the results of the past week. In principle, it does not even make any sense to consider macroeconomic reports. There were no performances by Jerome Powell last week. Christine Lagarde did not make loud statements, and all the top officials of the European Union are now directed at absolutely inappropriate behavior in London. There was information that the European Union had new problems with the recovery fund, which was adopted a couple of months ago in the amount of 750 billion euros. There are reports that many countries do not agree with the distribution of funds among the most affected countries, which was proposed by the European Council. However, we consider this information to be either untrue or unworthy of attention. If the 27 EU member states managed to reach a consensus on the size of the recovery fund, the budget for 2021-2027, and the sources of their funding, it is unlikely that the whole process will now stall due to the fact that countries will not be able to agree on the distribution of these funds. Moreover, immediately after the EU summit, at which everything was agreed, there was information about which country will receive how much money.

Thus, again, it turned out that all the most important and interesting news came from overseas. At the beginning of the week, the first round of debates between Donald Trump and Joe Biden took place, and at the end of the week it became known that Trump and his wife Melania fell ill with "coronavirus". Many experts and participants of this show have already spoken out on the debate. According to the absolute majority of the media and publications, this was the weakest and even "shameful" debate in the history of the country. It is reported that Trump constantly interrupted Joe Biden, put pressure on both his opponent and the host, in the end, the host even lost control of this show and it became quite "chaotic". Most Americans wanted to use the debate to find out the campaign promises of both presidential candidates in order to make a conclusion for themselves who they should vote for. Instead, they saw a reality show or something similar. For several decades, it has been believed that TV debates allow both candidates to collect the remaining votes of those who have not yet decided on the choice. The debate between Trump and Biden could only worsen the position of both. "This was an absolutely terrible debate that did absolutely nothing to educate the public about the two candidates and what they would do if they were given four years to serve as President of the United States of America," CNN reporters wrote. Fox News, which is usually loyal to Donald Trump, has the following opinion: "Both candidates resorted to swearing and insults, constantly interrupting each other. Joe Biden called Trump a "clown" and a "racist," and the President taunted the former Vice President for not being able to gather a crowd, questioned him about his son's alleged misdeeds in Ukraine and China, and reminded him of the former Vice President's poor academic performance." In general, all the debates were devoted to insulting each other and trying to compromise each other. There was no civilized discussion.

And now the election is just under a month away, and Donald Trump is sick. It is likely that there will not be two more scheduled rounds of debates. And in general, it is not clear how easy or difficult will Trump suffer from the disease. Recall that Boris Johnson, who is also overweight, had quite a hard time with COVID-2019 and was even in intensive care. Trump is also overweight, however, he is also aged. Recall that the US President is currently 74 years old. Thus, it is in the most serious risk group. In general, one month before the election, the situation becomes even more complicated.

Meanwhile, the White House raised the question of who will lead the country and make decisions while Trump is being treated? In addition to this very important question, there is also the question of who else was infected with the "coronavirus" from Trump's entourage? So far, it is reliably known that former presidential adviser Kellyanne Conway, Trump's closest aide Hope Hicks, Republican Senators Mike Lee and Tom Tillis have fallen ill. Trump campaign chief of staff Bill Stepien was also confirmed to have "coronavirus". The most "tough" thing about this whole situation is that Trump was in contact with many Republicans and Democrats on duty. And most politicians in the United States are very old people. For example, Joe Biden is 78, speaker Nancy Pelosi is 80, and Senate Republican majority leader Mitch McConnell is 78. Almost all senators in the Upper House are over 60. Thus, they can potentially carry the virus extremely hard. So far, the reins of government have passed to Vice President Mike Pence, whose "coronavirus" has not been confirmed. Also, Steven Mnuchin, the US Treasury Secretary, has so far avoided the fate of infection. And most importantly, it is now completely unclear how the elections will be held? It's good if Trump gets better in a week. And if not? Who will be the Republican nominee then? What about Supreme Court Justice Amy Coney Barrett, who should have been appointed under the patronage of Trump himself to replace the deceased Ruth Ginsburg in the very near future?

Just a week ago, we said that the times are not better for dollar investors and traders, as the level of uncertainty is too high. With Trump's illness, it has become even higher. We believe that this is a very convincing factor for the US currency to continue to weaken. 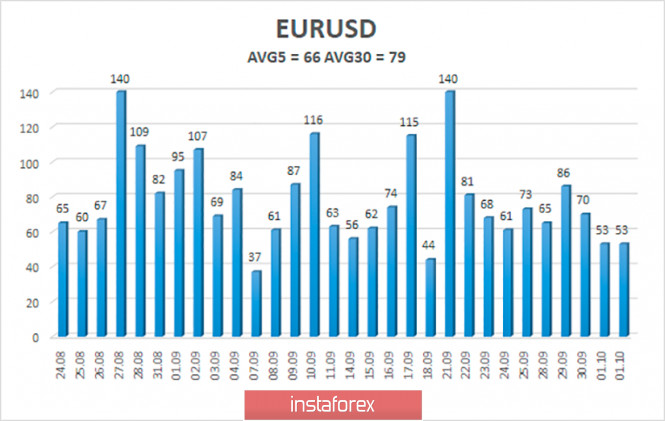 The volatility of the euro/dollar currency pair as of October 5 is 66 points and is characterized as "average". Thus, we expect the pair to move today between the levels of 1.1650 and 1.1781. A reversal of the Heiken Ashi indicator back upward may signal the resumption of the upward movement.

Interesting? Write a comment below.
 #Overview of the EUR/USD pair. October 5. Donald Trump is hospitalized. The situation with the elections and the future of
Forward 
Backward 