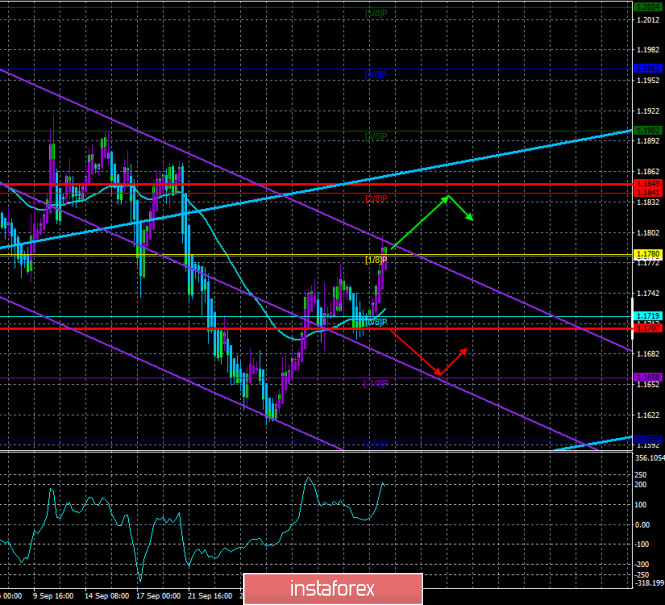 On Monday, October 5, the European currency resumed its upward movement, bouncing off from the moving average line. Thus, the position of the US currency at this time remains extremely weak. It should only be noted that after the growth of 1300 points, traders did not manage to correct the pair properly. At the moment, the correction is no more than 400 points. On the one hand, of course, this is quite a lot, on the other hand, the correction shows that the upward movement should resume, so traders can expect quotes to leave above the previous local maximum of $ 1.20. At the same time, it should be noted that in the last three months, the pair is in the closest possible movement to the definition of "flat". This point should be taken into account in long-term trading.

Meanwhile, in the US, all attention is focused on Donald Trump, who at the end of last week announced that he and his wife Melania had contracted the "coronavirus". Donald Trump even needed to be hospitalized, although his condition was not considered serious. This was followed by information that Trump is being treated with fairly strong drug dexamethasone, which is prescribed only to patients with a very severe form of the disease. However, despite the fact that Trump is in the hospital for only a couple of days, today or tomorrow, according to some journalists, the US President may return to the White House. Trump's attending physician, Sean Conley, said Trump's condition is improving. At the same time, Donald did not miss the opportunity to drive around the hospital in a car, accompanied by a whole retinue, to greet his supporters. What is the true state of Trump, if his doctor calmly lets the patient go outside, is unknown. Maybe Trump is not really sick? Moreover, how can they return to their duties in the next few days if they must be isolated for at least 14 days? Or will the entire White House be evacuated? Or will the entire White House wear chemical protection suits and gas masks? In general, it is absolutely unclear where the truth is and where the lie is.

Meanwhile, in the States, polls continue to be conducted almost every day. As we have repeatedly stated, the largest and most reliable polls of Americans continue to show that Donald Trump lags behind Joe Biden by about 8-10%. This time, the poll was conducted by the respected Reuters news agency and its results showed that 51% of respondents are ready to vote for Biden right now, and 41% for Trump. Also, 55% of respondents said they don't believe Trump when he talks about "coronavirus". Therefore, as we said earlier, the President's ratings simply had nothing to grow on in recent months. Trump did not fight the "coronavirus" from the very beginning, did not take any additional measures when the epidemic was in full swing, and his sacramental statement that "the consequences of the fall of the economy can be even more devastating than the consequences of COVID-2019" shows that Trump is more concerned about the economy, and not the lives and health of his nation. In the end, Trump himself was infected with the "coronavirus" and now it is unknown when he will return to his duties. Meanwhile, the election is less than a month away. For sure, Trump was going to spend this month trying to narrow the gap as much as possible from his opponent from the Democratic party. For example, by holding rallies and speeches in the most controversial states and cities in the United States. However, it is now completely unclear how Donald's election campaign will proceed.

Other news on Monday was not available to traders, except for a few macroeconomic publications, which are still not taken into account at this time by market participants. The euro is getting more expensive again because there are a number of reasons for this. We still believe that the country is facing a serious political crisis, which has now eclipsed even the economic and epidemiological crises. The level of uncertainty about the future of the country and its economy is off the scale. Thus, market participants simply do not risk buying the US dollar, especially in the long term.

The topic of elections deserves a separate article every day. TV debates that took place recently showed that the level of civility of both presidential candidates tends to zero. Donald Trump showed himself entirely familiar with the parties. Constantly interrupted the opponent and the host. And this is not a debate in a third-world country. For a moment, we are talking about a country with the world's largest economy. However, this is the American reality in 2020.

Another important issue that needs to be resolved in the near future is the appointment of a judge to the Supreme Court in place of the untimely deceased Ruth Ginsburg. Recall that Trump was very much in a hurry to nominate his candidate for this position, and he had every reason to expect that the Senate would approve him. And then, Trump would get the necessary advantage in the US Supreme Court. And he needs this advantage because the elections can smoothly move from the polling stations to the court. And then it will depend on the judges whether a recount of votes in a particular state will be allowed, whether the elections will be recognized as legitimate, no matter who wins them. In general, the situation is absolutely non-standard and sometimes even absurd.

In such conditions, there is no reason for the US currency to become more expensive. From a technical point of view, a new upward trend has been formed, which is not yet strong. Thus, the rise in the price of the euro currency in principle looks very logical in recent months. 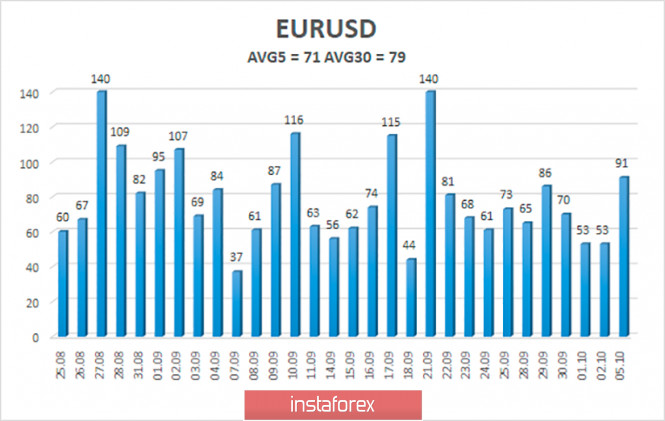 The volatility of the euro/dollar currency pair as of October 6 is 71 points and is characterized as "average". Thus, we expect the pair to move today between the levels of 1.1707 and 1.1849. A reversal of the Heiken Ashi indicator back down may signal a new round of corrective movement.