Overview of the EUR/USD pair. October 7. Is Trump really sick? Or is the White House hiding other facts about the US President's 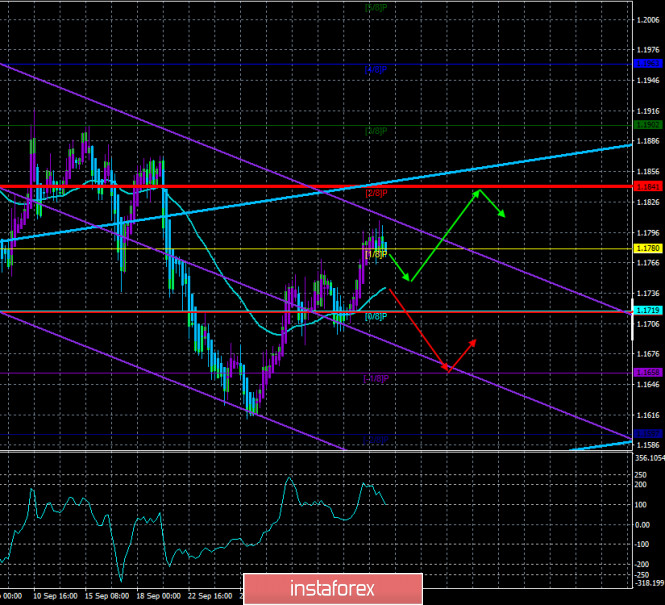 For the EUR/USD pair, the second trading day of the week was fairly calm and the trend remained upward. Thus, there were no major changes in the technical picture, and the advantage (small) remains for the European currency and buyers. The situation on the currency market for the euro/dollar pair remains quite difficult. The problem is that the downward trend failed to develop and everything was limited to a very small correction, which ended around the level of 1.1600. However, buyers are also not too eager to fight and are not in a hurry to actively buy the European currency, which continues to trade near two-year highs. We have repeatedly stated that the European currency has become more expensive in recent months mainly due to the difficult situation in America and its "four types of crises". If earlier we were talking about a social, political, epidemiological, and economic crisis, now the social crisis seems to have been overcome, however, there are still three more. Most importantly, the country is slowly but surely approaching the presidential election, which is the main event of the end of 2020 in the United States. Did you notice how abruptly all the skirmishes between Washington and Beijing ended? Did you notice how Trump's "coronavirus briefings" ended again? Have you noticed that there is no information about possible new trade wars between the States and other countries? But a month ago, this kind of information was received almost every day. However, now the whole world is waiting for the election results and understands that it is not necessary to force events and make important decisions before this event. Have you noticed how abruptly Anthony Fauci, who was almost the main character in the country this spring, disappeared from the monitors? In general, the whole country is focused on the elections, thus, it will be extremely difficult for the US currency to show growth in the next month. And investors and traders are unlikely to risk investing in the US currency.

Meanwhile, Christine Lagarde, head of the ECB, gave an interview to The Wall Street Journal, in which she said that the regulator is ready to take any measures to support the economy, including a new reduction in the key rate, which is already in negative territory. Lagarde said that with the start of the second "wave" of the pandemic, the EU's economic recovery has slowed. The head of the ECB also believes that GDP is unlikely to return to pre-crisis levels before the end of 2022. Thus, the Central Bank of the European Union can go for even more easing of monetary policy, as the recovery is slowing down, and the euro has grown significantly in the last four months, which negatively affects inflation and slows down the economic recovery even more.

Meanwhile, something very difficult to explain is happening in the States. Donald Trump was discharged from the hospital after three days, and his doctor said that he is not against this option at all. It seems that Trump went to the hospital to be discharged from there in three days and, thus, prove that the "coronavirus" is not so dangerous. In fact, this is exactly what he said right after he returned to the White House. The US President said that America has developed good drugs against COVID-2019, and the disease itself is not so terrible, and also urged not to let the virus control the lives of Americans. However, Trump did not explain the 210,000 deaths from this virus in the United States. Also, if he is not yet cured of the "coronavirus", how does he manage to return to his duties? Will Trump be in bed at the White House? Then why did he leave the hospital at all? And if Trump had a mild illness, why did he need to be hospitalized at all? In general, all this is very similar to an election production. It seems that Trump fully realized that the Americans will not forgive him for more than 200 thousand deaths from the "coronavirus" and decided to show that he himself fell ill with this "Chinese disease", but does not make a tragedy out of it, and after being discharged from the hospital "feels even better than 20 years ago". Needless to say, not all US residents have the same level of medical care as the President?

Well, while Trump was in the hospital, he was posting messages to the social network Twitter. Many media outlets on Monday noted that the US President posted 19 messages, with each one printed in capital letters. The US President called for voting for him, promised that next year will be "the best in history", and also poured mud on the Democrats, who, in his words, "will kill the economy". Thus, the situation with Trump's illness is likely to remain a secret. The President spent three days in the hospital and managed to make a "circle of honor" by car around the hospital, "to send greetings to his well-wishers", while he was treated with the drug "dexamethasone", which is prescribed to patients with severe cases of pneumonia. Thus, it is completely unclear whether the severe or mild form of "coronavirus" was for Trump. Did he ever get the virus, and why did he return to the White House if he didn't fully recover?

And the most interesting thing is that many American doctors also question the illness of Donald Trump or, at least, condemn his behavior and his doctor, Sean Conley. Many medical experts point out that Sean Conley's briefings were more like "a publicist's speech, not a doctor's". Sometimes Conley refused to directly answer questions from reporters, then evaded the answers and spoke in general phrases. At a briefing on Saturday, Conley said 72 hours had passed since Trump's diagnosis was confirmed. Thus, it turns out that Trump, being sick with the "coronavirus", continued to hold meetings and contact other White House employees for some time. It is anyone's guess how many people were infected by Trump, who is an ardent opponent of wearing a medical mask. A little later, Conley said that "he was misunderstood and he meant something else". In addition, there were other signals from Trump's entourage that indicated that the President's condition was serious. And the most surprising thing is that no one in the White House started sounding the alarm, although the President continued to be in it for some time while he is infected. In general, from our point of view, all this is very strange. And quite unlike the standard COVID disease and treatment in the hospital. One has only to remember how much and how British Prime Minister Boris Johnson was treated for the same disease. 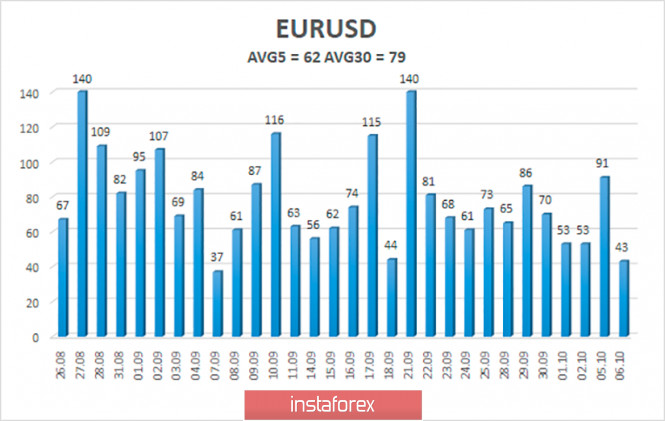 The volatility of the euro/dollar currency pair as of October 7 is 62 points and is characterized as "average". Thus, we expect the pair to move today between the levels of 1.1718 and 1.1842. A reversal of the Heiken Ashi indicator down may signal a new round of corrective movement.

Interesting? Write a comment below.
 #Overview of the EUR/USD pair. October 7. Is Trump really sick? Or is the White House hiding other facts about the US President's
Forward 
Backward 