Overview of the EUR/USD pair. October 8. Trump is already 16% behind Biden and still considers himself the winner of future 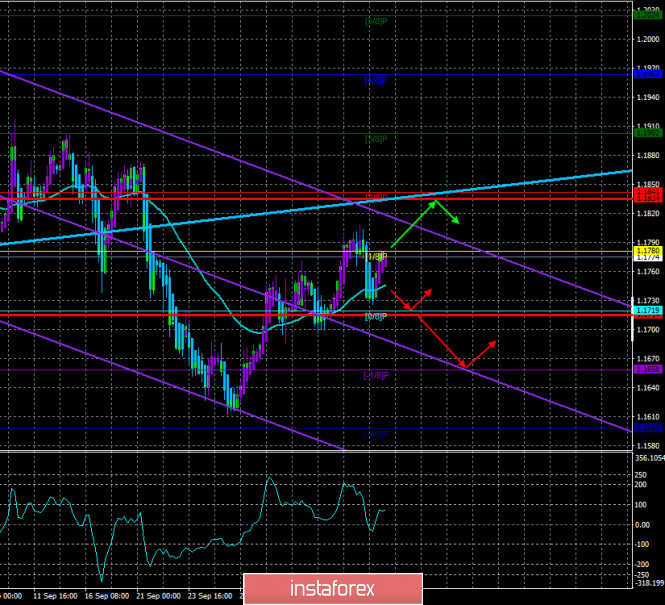 For the EUR/USD pair, the third trading day of the week was again calm. The pair once again corrected to the moving average line and again failed to overcome it. Thus, the upward movement resumed once again, which means that the bulls have difficulty, but still hold the initiative in their hands. This also means that the European currency continues to strengthen against the US dollar. Despite the fact that there is no outright flat for the pair at this time, we still tend to believe that the pair has been trading as close to the flat as possible in the last 3 months. If you look at the senior chart, it becomes immediately clear what we are talking about. The trading range in the last 2.5 months is strictly between the levels of 1.1600 and 1.1200. At the same time, the pair approached the upper and lower borders of this channel just a couple of times. Basically, all trades are held between the levels of $ 1.17 and $ 1.19. What is it if not a flat? And the "flat" movement, in our view, is caused by the maximum degree of uncertainty associated with the future of America and the American economy. If a few months ago we wrote about the "four types of crises" that the United States faced, which caused the dollar to fall by 13 cents, now these topics have been worked out, and every day we receive news from overseas that make the future of the country and its currency as incomprehensible as possible.

For example, the behavior of Donald Trump and his statements. To be honest, we believe that Trump will go down in history not just as one of the presidents of the United States, but indeed as the most odious president. Perhaps no one has been associated with so much news, so many rumors, so much gossip, scandals, lies, conflicts, and confrontations, as with Trump. Just over the past 2 weeks, the US President has managed to participate in a debate with his main opponent Biden, completely fail them (as indicated by approval ratings), however, he declares that he won the debate. Then he gets infected with the "coronavirus". Sow a whole lot of rumors that he was infected with COVID-2019 even before the debate took place. Infect several of his aides and members of the White House. Get to the hospital and ride around the hospital to wave to his fans. Get discharged from the hospital and declare that "coronavirus – no worse than the flu". Call on Americans not to be afraid of COVID-2019 and make appropriate posts on Twitter and Facebook, thus, run into another ban from social networks as "misleading about COVID". He also wrote 20 dozen other messages urging Americans to vote for him and not vote for a Democrat. Then he completely cancels negotiations with the Democrats on a new economic aid package. And this is a list of Trump-related news that came to mind without thinking for a long time. Naturally, all investors and traders hold their heads from such a volume of information, and simply do not know what to do with the US currency at all. Moreover, the election is less than a month away, and a sick Donald Trump has returned to the White House, and it is completely unclear when he will recover and how many people he will infect while he is in his administration. Or will all White House employees wear gas masks and chemical protection suits?

Moreover, Trump called on Joe Biden to hold the second and third rounds of TV debates despite the fact that he is infected with the "coronavirus". Joe Biden has already spoken out about this and refused to hold a debate if Trump is still infected with "coronavirus". Nancy Pelosi, one of Trump's main opponents and the speaker of the Lower House of the US Congress, also spoke out on this issue. According to her, "the first round of TV debates was enough with the voice". "I don't think Joe Biden should honor a debate with a president who has no obligation to speak out about facts, evidence, data and demeans the position he holds," the Speaker of the House of Representatives said.

Meanwhile, despite Trump's high-profile statements and his confidence in winning the presidential election, recent opinion polls suggest that Joe Biden has further increased the margin of victory. According to the latest CNN poll, about 57% of voters are ready to vote for Biden and only 41% - for Trump. Thus, firstly, the information that Trump allegedly reduced the gap in political ratings, as we said, is fake, and secondly, now Biden has further increased the gap. Voters support the Democrats in almost all areas of government. On "coronavirus", it is supported by 59%, in the field of health – 58%, in racial issues – 62%, in the issue of appointing a new chief justice – 57%, in the fight against crime – 55%. Even on the economic issue, Biden's support is now higher – 50% versus 48% for Trump, although a few months ago this was the only area in which the current president was leading. 66% of American women are ready to vote for Biden. Thus, despite the fact that the victory of a candidate will be determined by "electoral votes" and "disputed" (they are also "wavering") states, such results of opinion polls suggest that Biden will win. To be honest, it's hard to imagine what would happen if Biden will not win.

Well, for the US currency, it doesn't even matter who wins the election. The degree of uncertainty in which the country and its future are located is important to it. And the higher this degree, the less likely the dollar is to grow. Thus, until the elections on November 3, we believe that the US currency will not become more expensive. No one knows what will happen next. A new president is a new policy, so what will happen to America in 2021 is impossible to predict. We also believe that it will be difficult for quotes to leave the $ 1.17 - $ 1.19 channel, which they have now returned to, and even more difficult – the $ 1.16 - $ 1.20 channel. Market participants are just waiting at this time to see how everything will end in the confrontation between Trump and Biden, and only as a result of this will they be ready to build new long-term trading strategies. As for other factors other than political ones, they don't really matter now. We all see that all macroeconomic statistics are ignored, the speeches of Jerome Powell, Steven Mnuchin and others are not perceived by the markets. Even the news about the failure of negotiations between Democrats and Republicans did not put much pressure on the US currency, although in theory, they should have done so. 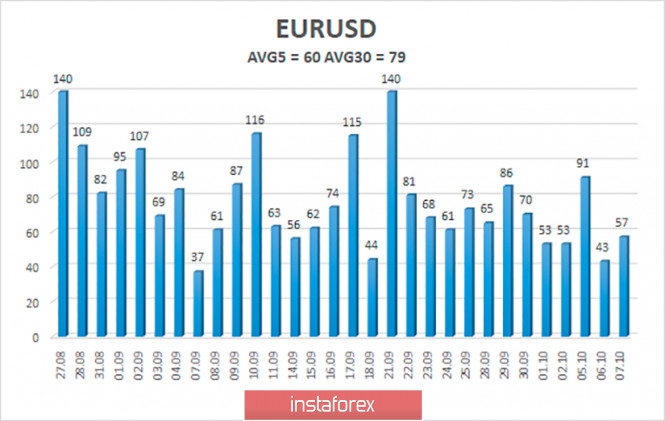 The volatility of the euro/dollar currency pair as of October 8 is 60 points and is characterized as "average". Thus, we expect the pair to move today between the levels of 1.1714 and 1.1834. A reversal of the Heiken Ashi indicator down may signal a new round of corrective movement.

The EUR/USD pair continues to be located above the moving average line. Thus, today it is recommended to continue to stay in long positions with a target of 1.1834 until the Heiken Ashi indicator turns down. It is recommended to consider sell orders again if the pair is fixed back below the moving average with the first targets of 1.1719 and 1.1658.

Interesting? Write a comment below.
 #Overview of the EUR/USD pair. October 8. Trump is already 16% behind Biden and still considers himself the winner of future
Forward 
Backward 