Overview of the EUR/USD pair. October 9. Donald Trump infected the floor of the White House with the "coronavirus", however, 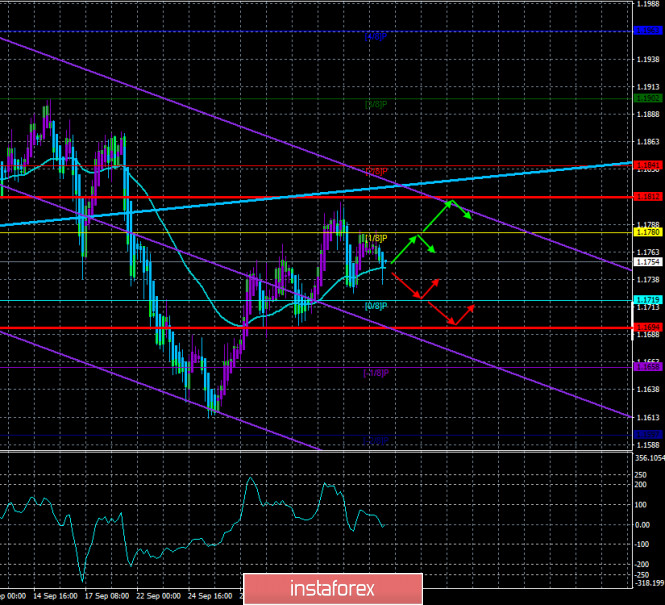 For the EUR/USD pair, the fourth trading day of the week was again held in exceptionally calm trading. Formally, the trend was present, however, it was absent. And we've been talking about this for the past few months. At first, the pair was trading strictly inside the side channel of $ 1.17 - $ 1.19, occasionally leaving it for a short time. Now the trading has moved to a wider, but also horizontal range. Simply look at the daily timeframe and everything becomes clear. The pair has been moving up bitterly in recent days, although from a fundamental point of view, the strengthening of the European currency is just more justified. In America, everything is still very restless, elections are approaching and the entire information space is devoted to politics. Traders have ignored all macroeconomic statistics, as they should have in the last six months. Several performances by Jerome Powell and Christine Lagarde are also ignored by traders. Thus, whether we like it or not, the ball is now ruled by politics. Further, traders and investors are not willing to take risks before the elections, which will take place in a few weeks. They are not ready to buy the US dollar. As for the euro, it has already risen by 1300 points since April. Market participants are also wary of buying at two-year highs in the euro.

Naturally, the number one topic remains "Donald Trump's coronavirus". Recall that a few days ago, the US president officially announced that he and his wife were infected with COVID-2019. However, despite the hospitalization, a couple of days later, Trump was discharged from the clinic and returned to the White House. Back then, a couple of days ago, we were wondering how the president will communicate with other White House employees? A little later, we received information that everyone who will somehow contact the president will be given personal protective equipment, masks, and so on. Trump himself, who has already made two video addresses to the nation, does not look sick at all. Why hospitalization was necessary in this case is unclear. First, Trump again compared the "coronavirus" with the flu, for which he immediately ran into a ban from social networks Twitter and Facebook. In his second video, the president said: "I think it was a blessing from God that I caught it. It was a blessing in disguise." In principle, we fully agree with Trump since this whole story pulls on a "miracle cure". After Trump declared that he was "marked by God", it became known that 34 employees of the White House also contracted COVID-2019. A lot of American media have already called the White House a "hotbed of the virus" and they are not far from the truth. This is exactly what you should expect. It is reported that as soon as Trump returned to the White House, he immediately tore the mask from his face and put it in his pocket, even though he could (and most likely infected) infect everyone with the "coronavirus".

The New York Times, by the way, immediately calculated the state's expenses for the treatment of Donald Trump. They amounted to at least $ 100,000. However, most of these costs are not related to the treatment itself or medical supplies, but helicopter flights and virus tests. It is reported that the majority of Americans face large financial problems in the treatment of the disease. The president of the country should get better medical care, but what about the fact that Trump from the very beginning of the epidemic behaved as if the country was just faced with the flu virus? He did not wear a mask, calmed the population, and misled them with his statements. As a result, the country has already recorded more than 7 million cases of the disease, and the number of deaths has exceeded 211,000. Moreover, the US media believe that Trump was infected with the "coronavirus" before the TV debate with Biden. A list of 206 people the president contacted at a fundraising event in New Jersey has already been compiled.

At the same time, the country's chief epidemiologist Anthony Fauci, who for a very long time openly clashed with Trump, refuting almost each of his statements about the pandemic, said that about 300-400 thousand people could die from the "coronavirus" in the United States. Fauci's previous forecast of 200,000 deaths, which he made back in March, has already come true.

Well, various reputable American publications continue to calculate the chances of winning the election of a Democrat and a Republican. The Economist newspaper believes that Donald Trump's COVID-2019 infection will negatively affect his already low chances of winning. Various opinion polls conducted after the debate show Biden leading by 14-16%. The Economist conducted a serious simulation of future elections a few months ago, the result of which was that Joe Biden will win the election with a probability of 91%. This simulation is not a simple vote count, but a procedure that takes into account voting in different states and the candidates' set of "electoral votes". Now the publication writes that at the debate, Trump did nothing to sway wavering voters to his side. And his COVID infection was just the "cherry on the cake" after months of ridicule by the president over those who were attentive to wearing a medical mask, in particular over Joe Biden.

Although Trump has already infected about 34 White House employees, as well as an unknown number of people in New Jersey, he is going to resume holding campaign events next week. On October 12, the president is going to go to Pennsylvania, and on October 13 – to Michigan. On October 15, Trump plans to hold a second round of televised debates with Joe Biden, followed by an event in Florida the next day.

The euro/dollar pair continues to trade extremely sluggishly, as evidenced by the volatility indicator of recent days. On average, the pair passes from the minimum to the maximum of each day no more than 70 points. This was the case in 9 of the last 11 days. The last four of the five days ended with a volatility of no more than 57 points. And this is against the background of an almost complete absence of a trend. In general, this is not the most favorable situation for trading. From a technical point of view, formally there is an upward trend. And it will remain as long as the price is above the moving average. 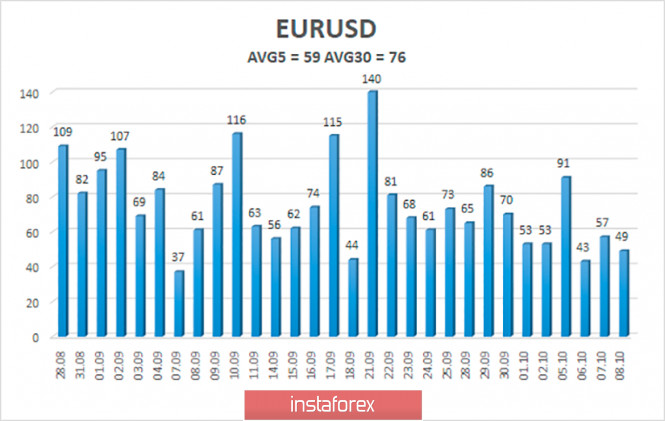 The volatility of the euro/dollar currency pair as of October 9 is 60 points and is characterized as "average". Thus, we expect the pair to move today between the levels of 1.1694 and 1.1812. A reversal of the Heiken Ashi indicator to the top may signal a new round of upward movement.

Interesting? Write a comment below.
 #Overview of the EUR/USD pair. October 9. Donald Trump infected the floor of the White House with the "coronavirus", however
Forward 
Backward 