Overview of the GBP/USD pair. October 13. The European Union is going to tighten the provisions of the Brexit deal due to 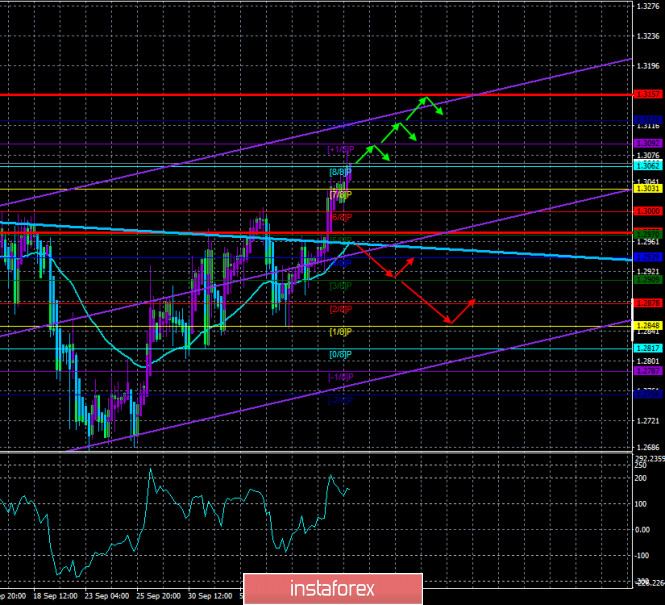 The British pound spent Monday in a weak upward movement again. However, after another price rebound from the moving average line (as in the case of the euro), the upward movement resumed, and on Monday there was not even a significant correction. Thus, the British pound continues to stay afloat, although the fundamental background can bring it down at any time. The only thing that keeps the pound from falling again is the fact that traders do not want to buy the dollar in the run-up to the presidential election and against the background of all the uncertainty and crisis that is currently observed in America. If there were not so many problems in the United States now, there is no doubt that we would be catching the pound somewhere in the range of $ 1.10- $ 1.20.

However, we can still do this in the coming months. We have repeatedly said that there are so many economic problems in the UK now that we simply can't count on anything other than the fall of the pound in the long term. And the British economy may face even more problems next year, which the country will finally spend outside the European Union. Experts estimate that over the next 10 years, the negative effect of the termination of all ties and agreements with the EU will not reach the British economy 3-4% of GDP. Thus, the British economy will not start to recover next year. It will continue to fall. A long-term decline or a contraction. And if the "coronavirus" fails to curb the British government in the near future, the Kingdom risks getting another serious blow from the second "wave" of the epidemic. In recent days, the incidence rates in Britain have declined and do not exceed 13 thousand per day. However, this is still a lot.

Meanwhile, as we said earlier, any negotiations between London and the European Union or other international partners may become much tougher. All thanks to the "Johnson bill", which has already been passed by Parliament in the second reading and simply violates the previous agreements between London and Brussels on the border on the island of Ireland. It is reported that during the EU summit on October 15-16, EU leaders will insist on tightening the rules for compliance with any bilateral agreements with the UK, as well as on improving the mechanism of sanctions and penalties for non-compliance with them by one of the parties. Simply put, Brussels has realized that Boris Johnson can break any agreement at any time, so they want to prescribe clear rules on how to act in such cases. Naturally, these rules will mean tougher penalties for London. The European Union wants to get the right to take any unilateral temporary measures in response to London's non-compliance with the agreements. We believe that any international partners of the Kingdom will now want to prescribe similar mechanisms in any agreement with the British.

Boris Johnson also had two phone conversations over the weekend. With German Chancellor Angela Merkel and French President Emmanuel Macron. Naturally, Brexit was discussed, and the British Prime Minister told his European colleagues that his country is ready to return to the WTO trade regime with the European Union. "The Prime Minister stressed that while reaching a deal in the coming days would be in the interests of both sides, the United Kingdom is also ready to start trading with the EU on the same terms as Australia after the end of the transition period if an agreement is not possible," 10 Downing Street said in an official statement. Johnson also expressed hope that a trade deal will still be possible, but few people still believe this. For example, the head of the Ministry for Foreign Affairs of Ireland Simon Coveney doesn't believe this. Coveney said that there remain serious differences between the parties on all key issues, in particular the issue of fishing and the issue of fair competition. "It is obvious that we will not reach a comprehensive agreement on the relationship between the European Union and Britain, but serious differences also remain on the way to agreeing on a deal in its most basic version," Coveney said. The Irish Foreign Minister also called the possible entry into force of the "Johnson bill" "a colossal mistake of British diplomacy and a gross violation of legal norms".

At the same time, the UK is going to introduce a new three-level system of countering the "coronavirus". It is expected that the entire country will be divided into districts based on the risk of infection. The first one will be the safest, and the third one will be the most dangerous. In areas of the third level, a "hard" quarantine or even a complete "lockdown" can be introduced. Bans in such areas will even apply to the movement of citizens on the streets. The process of fighting the pandemic is complicated by the dissatisfaction of British citizens. It is reported that the British are not happy with the new quarantine measures, high fines, and overall results of the government's fight against the epidemic.

Meanwhile, Bank of England Governor Andrew Bailey once again spoke about "negative rates". The regulator still states that it collects information from the banking system about the readiness or unwillingness of commercial banks to take such a step on the part of the Central Bank. The head of the BA also states that collecting information on this issue does not mean that such measures will be taken in the near future. However, as they say, "there is no smoke without fire". Market participants are waiting until the end of the year, at least, to expand the quantitative easing program from the current 745 billion pounds to 795 or 845 billion. However, the key rate is likely to be lowered again, possibly even before the end of the year. Most experts agree that the rate will be lowered with a 95% probability until May 2021. Thus, the Bank of England shows that the fears of traders and investors in the future of the British economy are absolutely not in vain. 2021 may be even more negative for the British economy than 2020. Well, the British pound in such conditions is unlikely to show stable growth. Unless the flow of disappointing fundamental and macroeconomic information from the US does not stop. Or Donald Trump will remain president for a second term. 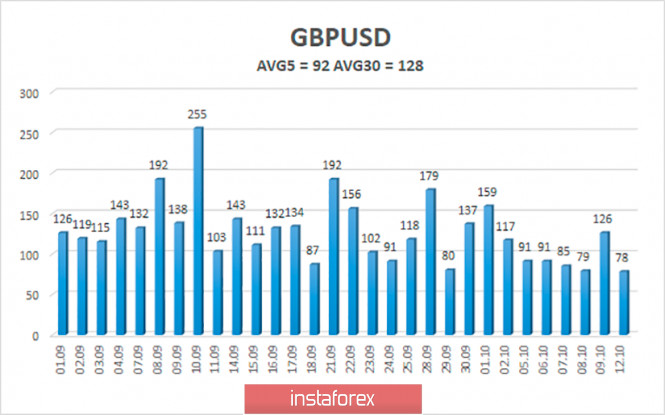 The average volatility of the GBP/USD pair is currently 92 points per day. For the pound/dollar pair, this value is "average". On Tuesday, October 13, therefore, we expect movement inside the channel, limited by the levels of 1.2973 and 1.3157. A new reversal of the Heiken Ashi indicator downwards signals a new round of downward correction.

Interesting? Write a comment below.
 #Overview of the GBP/USD pair. October 13. The European Union is going to tighten the provisions of the Brexit deal due to
Forward 
Backward 