Overview of the GBP/USD pair. October 14. The EU's position in the negotiations with London is softening, despite the opposite 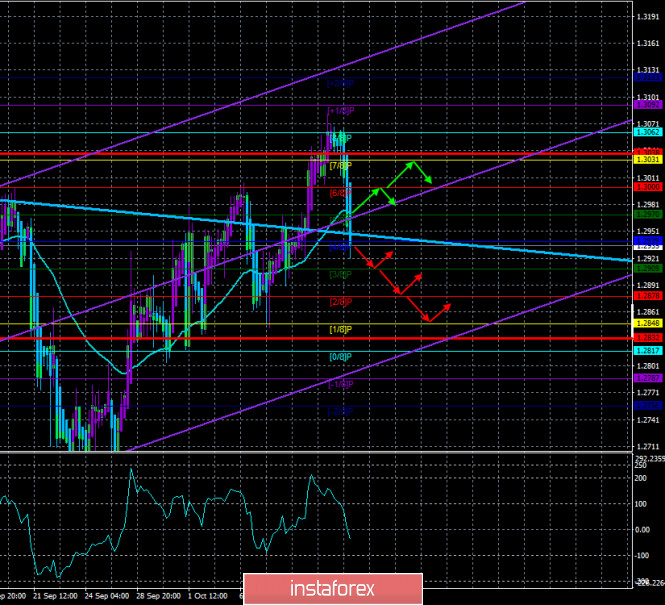 The British pound sterling paired with the US currency also fell down in the second half of the last day. It is difficult to say what caused a sharp rise in the US dollar. However, we would not recommend giving it too much importance. If you look at the chart of the pound/dollar pair carefully, there have been at least three such price collapses in the last two weeks alone. So, from our point of view, nothing extraordinary happened. Moreover, in the very near future, the pair may return to the area above the moving average line and resume the upward trend. The most interesting thing for the GBP/USD pair is the fundamental background. Because it is equally or almost equally bad for both the British pound and the US dollar. Thus, now it is simply impossible to draw a conclusion like: "The pound has a much better chance of growth due to a favorable background". This is why we recommend paying more attention to technical factors and keeping in mind that the fundamental background is equally weak for both currencies.

We have already talked about the United States. Most of their problems, which have put pressure on the dollar in recent months, may be resolved before the New Year. Elections will be held, election courts will be held, and Democrats and Republicans, presumably, will have already agreed on a new package of assistance to the American economy. And the situation for the US currency will become more calm and favorable. But for the pound, it's just getting started. We have repeatedly said that from 2021, Britain's GDP will be reduced again in any case, even with a deal with the EU, even without it. And no one can say what will be the consequences of a new outbreak of coronavirus for the British economy. The only mitigating factor for Britain is a free trade agreement with the European Union. And I must say that in recent weeks, everything in this issue has become confused and now it does not look as clear as before.

Recall that from the very beginning, the European Union has taken an exceptionally tough position on negotiations. EU leaders have repeatedly stated that London will not be able to enjoy all the preferences of EU membership without being in the EU itself. Alliance leaders have accused the UK of excessive desires and unwillingness to give in and have repeatedly stated that London will not achieve anything by using such a strategy in negotiations. After the "Johnson bill" became known in early September, the European Union reiterated that the negotiations could become even more complicated. However, despite all these statements, negotiations continue according to the scenario of Britain. First, Boris Johnson sets deadlines for these negotiations and graciously agrees to postpone them from time to time. Second, London's position is also notable for its steadfastness. Third, there is only one conclusion that can be drawn now. If negotiations continue, then there is still minimal progress. However, in what question? Recall that the key differences between the parties are issues of fishing in British waters, fair and transparent competition between European and British companies, the supremacy of the European Court of Justice and Law, as well as compliance with European rules and regulations. What is known for certain is that London refuses to grant the right to European countries to have unrestricted access to British waters for fishing. Thus, several EU countries may lose entire fishing industries at once, since they do not have their own waters.

One way or another, the negotiations continue and there may be either a breakthrough or a failure at the next EU summit, which will be held this week. We don't want to get so far ahead of ourselves and try to predict the results of the summit and the negotiations. We would just like to note that it seems that the European Union is ready to make big concessions in order to reach an agreement with London. It is difficult to judge now if this is true or not. However, not all EU countries are ready to be loyal and soft in the Kingdom. For example, France is also taking an extremely tough position in the negotiations, as it is its fishing industry that could be severely affected by the ban on fishing in British waters. According to rumors, it is Paris that can "hack" the deal if its interests are not taken into account or satisfied. It should be remembered that the European Union consists of 27 states and at least five of them have a significant voice in any issues discussed.

At the same time, Boris Johnson made another "reassuring and encouraging" statement regarding the COVID-2019 epidemic. The British Prime Minister said that there is no hope for an effective vaccine, at least in the near future. The British Prime Minister believes that the chances of getting a vaccine are very high, but "SARS/SARS (severe acute respiratory syndrome) appeared 18 years ago and we still do not have a vaccine against it". Meanwhile, the second "wave" of the pandemic in the UK continues to progress, with approximately 14-15 thousand new cases registered each. Quarantine measures have been tightened, but this does not yet affect the spread of the virus.

And of course, it is impossible not to note the possible reduction of key rates by The Bank of England in the negative area. Of all the inaccurate factors, this one is the least doubtful. Traders have little doubt that the BA will go to expand the quantitative easing program by another 50 or 100 billion pounds, as well as to reduce the key rate. It's just a question of timing. Most experts still believe that the regulator will resort to such serious measures only at the moment of greatest danger and threat. In other words, when the British economy suffers another setback. We don't know when that will happen. Many experts agree that at the beginning of 2021, BA will be forced to take such a step because of Brexit and the new reality in which Britain will now have to exist. Thus, after the month of November, we would say that the chances of growth are much higher for the US currency than for the pound sterling. Moreover, even now the pound looks somewhat overbought. 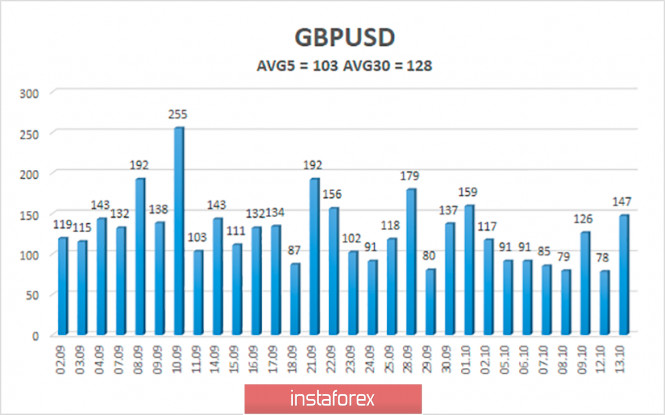 The average volatility of the GBP/USD pair is currently 103 points per day. For the pound/dollar pair, this value is "high". On Wednesday, October 14, therefore, we expect movement inside the channel, limited by the levels of 1.2832 and 1.3038. A reversal of the Heiken Ashi indicator to the top signals a round of upward correction or a resumption of an upward trend.

The GBP/USD pair started a strong downward movement on the 4-hour timeframe. Thus, today it is recommended to stay in short positions with targets of 1.2909, 1.2878, and 1.2848 as long as the Heiken Ashi indicator is directed down. It is recommended to trade the pair for an increase with targets of 1.3000 and 1.3031 if the price returns to the area above the moving average line.

Interesting? Write a comment below.
 #Overview of the GBP/USD pair. October 14. The EU's position in the negotiations with London is softening, despite the opposite
Forward 
Backward 