Overview of the GBP/USD pair. October 15. The EU summit is not an "X-hour" for the pound. Negotiations on the "deal" can 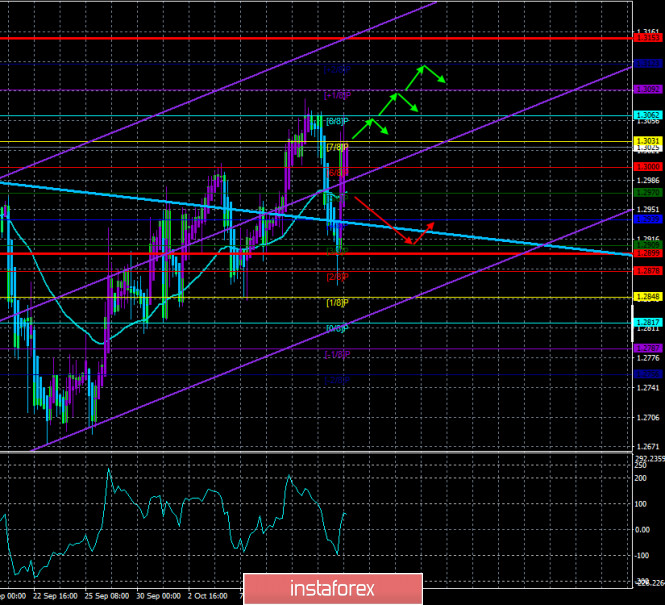 The British pound sterling paired with the US currency collapsed by almost 200 points on October 13. However, on October 14, it began to recover. The pullback of the GBP/USD pair quotes to the top looks quite logical, since the drop itself was quite strong, and most importantly – groundless. First, it is worth noting that the reasons for the fall of the British currency on the 13th do not lie in Brexit or negotiations between Brussels and London. Simply because there was no news on these topics, and especially no disappointing news. Secondly, the pound/dollar pair continues to be tossed from side to side, and this can be seen even with a cursory glance at the 4-hour timeframe. Over the past two weeks, the pair has fallen sharply by more than 100 points at least 3 times (before the last drop). Thus, the upward movement may resume today. How does this upward movement fit in with the current fundamental background? Simple. The fundamental background from the UK is now simply ignored. Otherwise, we would not have seen the strengthening of the British currency in principle. Moreover, this background has remained unchanged in recent weeks. Participants in the negotiation process, all as one, regularly report that there is not enough progress on key issues. Today, on October 15, the EU summit begins, during which any decision can be made. Of course, it would be just fine if the summit participants clearly stated: "There will be no deal." Or Vice versa. "The deal is done!". However, we do not expect this option, if only because the negotiations were extended for 1 month with the consent of both sides. In other words, the final results of the negotiations should be expected by November 15, not October. Today, all participants in the summit can again discuss issues related to the future relationship between the Alliance and the Kingdom but do not make any decisions. Moreover, what prevents London and Brussels from continuing negotiations later on November 15? Boris Johnson, of course, can set new deadlines at least every month, however, they are well aware that without a free trade agreement, it will be bad for both the British and Europeans. And everyone understood from the very beginning that in 9 months (and even 6 or 7 months), it is impossible to agree on such a large transaction. Thus, nothing will prevent the parties from continuing negotiations, for example, in 2021. Moreover, in 2021, both sides will have additional motivation to make concessions and not delay negotiations, as both sides will begin to feel the charms of trade under WTO rules with each other.

Thus, with a high probability, today will not be another "X-day" for the UK and the British pound. And negotiations on the "deal" can safely continue for several years, becoming a full-fledged separate season of the series called "Brexit", which has not left the TV screens for 4 years. As for the American fundamental background, it is now more acute on the agenda. Simply put, the Brexit situation has been going on for 4 years. So one or two months doesn't solve anything. But elections in America take place every 4 years and they are now only three weeks away. Therefore, the markets pay more attention to the elections and political "gestures" in the United States. Although even this conclusion does not look completely unambiguous. For example, since the beginning of the "coronavirus crisis", the US dollar has become cheaper and paired with the pound sterling. This was followed by a very impressive pullback (from September 1 to September 23). That is, the pound sterling fell significantly at a time when the information was received about the next failures in the negotiations on the "deal" and the "Johnson bill". The current upward movement can generally be regarded as a purely technical correction against the fall between September 1 and 23. If this is the case, then in the near future, the fall in the British currency quotes may resume. Now, in general, there is an ambiguous situation, when both in the United States and in the UK, the fundamental background is so bad that it is impossible to make a clear conclusion that any of the currency should become cheaper. Therefore, we still recommend paying more attention to technical factors and using foundation analysis only as a supplement to technical analysis.

Meanwhile, in the UK, not only the incidence of "coronavirus" is growing, but also the death rate. It is reported that more than 17 thousand new cases were recorded yesterday, which is almost 3 times higher than the peak values at the height of the first "wave" of the epidemic this spring. Also, 143 people died, which is also a very high figure. Amid the spread of the epidemic in the foggy Albion, the Labor Party is calling for a "lockdown". Labor leader Keir Starmer said that "The UK government has lost control of the coronavirus and is no longer following scientific advice and has no reliable plan to reduce disease rates." Keir Starmer called on the government to impose a two or three-week quarantine. The same opinion is shared by healthcare professionals. Yvonne Doyle, Director of the Public Health Service, believes that "the number of infections among older people is increasing, which leads to an increase in the number of hospitalizations". Andrew Hayward, Professor of Infectious Disease Epidemiology at University College London, says it is not surprising that the number of cases continues to rise, as "the British authorities have not introduced tougher measures to counter COVID-2019". Thus, the epidemiological situation continues to heat up in the UK, which may also put pressure on the pound in the near future. Even now, it is clear that traders of the pound/dollar pair are quite nervous and may even panic. Thus, each new negative news from the Foggy Albion clearly will not add to their calm and confidence. 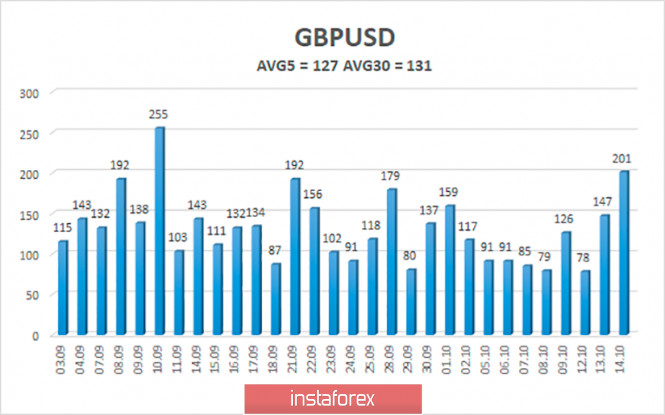 The average volatility of the GBP/USD pair is currently 127 points per day. For the pound/dollar pair, this value is "high". On Thursday, October 15, therefore, we expect movement inside the channel, limited by the levels of 1.2899 and 1.3153. A reversal of the Heiken Ashi indicator downwards signals a new round of downward correction or downward movement.

The GBP/USD pair has started a new strong upward movement on the 4-hour timeframe. Thus, today it is recommended to stay in long positions with targets of 1.3062, 1.3092, and 1.3123 as long as the Heiken Ashi indicator is directed upwards. It is recommended to trade the pair down with targets of 1.2909 and 1.2899 if the price returns to the area below the moving average line.

Interesting? Write a comment below.
 #Overview of the GBP/USD pair. October 15. The EU summit is not an "X-hour" for the pound. Negotiations on the "deal" can
Forward 
Backward 