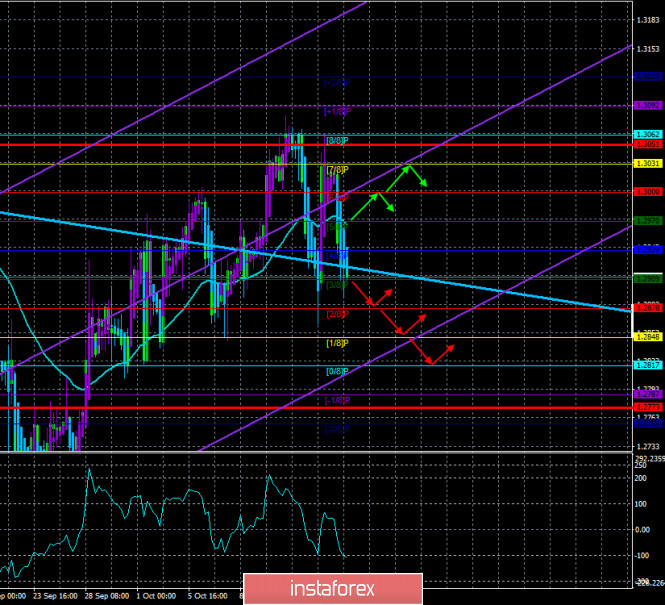 The British pound sterling, paired with the US currency, collapsed by almost 200 points on October 13, recovered by 180 points on October 14, and again collapsed by 150 points on October 15. Thus, the "storm" for the pound/dollar pair continues and the pair has fallen by about 200 points over the past 2 weeks. This suggests that the market has developed a kind of panic and confusion. Traders are nervous and the reasons for these nerves lie in the UK, as the euro/dollar pair is trading very calmly, so the reasons are not based in the EU or the US. Well, what could be the case in the UK that traders started to panic so much? Of course, Brexit. Brexit and the second wave of "coronavirus", which makes you worry about the future of the country.

And the first thing we want to note is the number of new cases of "coronavirus" infection, which was detected on October 14. This number is 19,751 cases. This is the absolute maximum for the entire period of the pandemic, except for October 4, when 23 thousand cases were recorded, but then it turned out that the real number of diseases on this day was added to the cases that had not yet been taken into account. Thus, we can assume that it was on October 14 that a new anti-record was set in the Foggy Albion and this anti-record is almost 4 times higher than the maximum levels of morbidity that were recorded in March-May when the UK health system was already bursting at the seams. Thus, the first reason for yesterday's fall in the British currency is "coronavirus".

The second reason is the EU summit, during which issues related to the Brexit deal were to be discussed once again. However, it is not forbidden to discuss Brexit, however, traders are not interested in the next discussion, but the final results of the negotiations. But there are no results yet and they are unlikely to appear on October 16. The fact is that even before the start of the summit, many EU and UK officials, as well as political experts, noted that the parties will declare insufficient progress in the negotiations and continue them. Thus, in fact, at the end of the summit, its participants will have nothing to tell the markets. As for the prospects of signing a free trade agreement, they remain extremely doubtful, and we give no more than a 5% probability of success. In fairness, it should be noted that we believe that it will be almost impossible to reach an agreement. The vast majority of media and publications also wrote on the eve of the summit that there will probably be no trade deal, and the Kingdom and the Alliance will trade with each other from 2021 on WTO terms. And this is the second reason for the fall of the pound yesterday and its possible further fall.

It also emerged yesterday that the Organisation for Economic Co-operation and Development expects UK GDP to shrink by 10% or more by the end of 2020. It is only necessary to compare this figure with the one that the Fed predicts for its economy – minus 6.5% in 2020. The figure from the Fed may be slightly overstated, but in the worst case, it is -7%. Although in the second quarter, the US economy lost 32% and the British – 20%. If the OECD forecast is accurate, it turns out that the British economy is recovering much slower than the American one, which is another reason for the further fall in the British pound. Also, we have repeatedly stated that in 2021, if the pandemic is brought under control, many of the world's economies (almost all of them) will begin or continue to recover, depending on how strong the second wave of the epidemic. All or many, but not the British economy, which may start to shrink again due to Brexit and new trade conditions with the European Union. And this is the fourth reason for the very likely further fall in the British currency quotes.

The fifth reason is political. We continue to believe that Boris Johnson as Prime Minister of the United Kingdom has not achieved a single victory, except for Brexit, which, by the way, is not even completed yet. And if the head of state does not win, does not lead the country to development and growth, cannot agree with international partners, then it is unlikely that in this case, it makes sense to talk about economic growth.

The sixth reason is the possible loss of Scotland. According to the latest sociological research, about 58% of people in Scotland support the country's exit from the United Kingdom. Over the past 6 years (this is how much has passed since the last independence referendum), the number of supporters of leaving the Kingdom has increased by 15%. Recall that the head of state and the Scottish National Party, Nicola Sturgeon, promised voters that a new date for the independence referendum will be chosen before May 2021. The main dissatisfaction of Scots is because the UK has left the EU, and about 62% of Scots are against severing ties with the EU. Thus, there is no doubt that Edinburgh will continue to push for a new referendum and will try to enlist the support of the European Union, which will not mind at all if Scotland returns to its membership. And the situation is quite difficult for Edinburgh because London not only has the full right to refuse to hold a new referendum but also has very strong justification for its refusal. This was stated by Boris Johnson in a letter to Nicola Sturgeon: "You and your predecessor personally promised that the 2014 independence referendum would be the only one in this generation. The people of Scotland voted strongly to remain in the United Kingdom." The argument is ironclad, otherwise, Scotland will want to hold a referendum every year. However, many experts believe that Scotland can follow the path of legal proceedings or stop obeying London to continue pushing for a second referendum.

Thus, the prospects for the British pound remain dim against almost all major currencies, and we believe that in 2020 and 2021, the long-term decline in its quotations will resume. 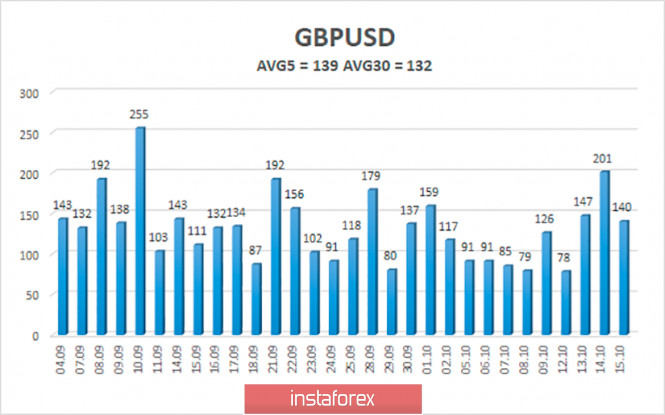 The average volatility of the GBP/USD pair is currently 139 points per day. For the pound/dollar pair, this value is "high". On Friday, October 16, therefore, we expect movement inside the channel, limited by the levels of 1.2773 and 1.3051. A reversal of the Heiken Ashi indicator up signals a new round of upward correction or upward movement.

The GBP/USD pair started a new strong movement on the 4-hour timeframe. Thus, today it is recommended to stay in short positions with targets of 1.2878, 1.2848, and 1.2817 as long as the Heiken Ashi indicator is directed down. It is recommended to trade the pair for an increase with targets of 1.3000 and 1.3031 if the price returns to the area above the moving average line.