Overview of the GBP/USD pair. October 2. The European Union begins legal proceedings with London regarding the Brexit agreement 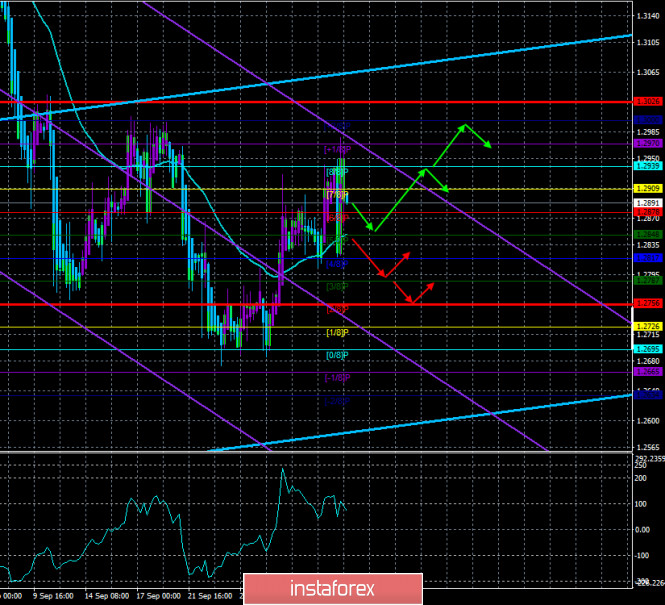 On Thursday, October 1, the British pound paired with the US dollar showed enviable volatility. Within 7-8 hours, the British pound quotes first fell by 120 points, so they rose by 140, then fell again by more than 100 points. Such movements are called a "storm" when the pair is thrown from side to side. However, there were reasons for this on the first day of October. We will discuss them below. In the meantime, let's get back to the technical picture. Although the pound plowed down twice by 100 points, it still failed to confidently overcome the moving average line. Thus, first of all, we cannot yet make a clear conclusion that the upward trend has ended, and secondly, now we need to wait for the markets to calm down and re-evaluate the entire current technical picture.

The fundamental background suggested sharp movements of the pair in different directions yesterday. The fact is that the European Union sent an official notification to the government in London, in which it announced that it was starting legal proceedings for violating the Brexit agreement. This is exactly the scenario we expected, as we have repeatedly discussed in previous articles. Boris Johnson decided once again to bluff and scare Brussels with a violation of the agreement on Brexit if a trade deal is not signed. However, now the British Prime Minister will receive the international trial, which will further lower the reputation of the UK, which was tarnished the last action 10 Downing Street. European Commission President Ursula von der Leyen said that the UK authorities had to fix a new bill "on the domestic market" so that it is not contrary to the already signed agreement on Brexit. London had until September 30, but instead of making adjustments to the bill, the British Parliament approved it in the second reading. Von der Leyen called such actions by London "a de facto refusal to comply with agreements and principles of international law". "This bill is by its very nature a breach of the obligation of good faith set out in the Brexit agreement. Moreover, if it is adopted in its current form, it will completely contradict the protocol on Ireland and Northern Ireland," the head of the European Commission said.

However, these are far from the only problems the UK has faced in recent days. The fact is that the "coronavirus" is again attacking Foggy Albion. The beginning of the second "wave" was announced by Boris Johnson a few weeks ago. Now, health experts have said that "the virus is essentially out of control". "We don't keep it under control at the moment," the UK's chief scientific adviser, Patrick Vallance, said at a government press conference. Chief medical officer of Britain Chris Whitty confirmed that the number of illnesses and hospitalizations is growing. In the last two days, 7 thousand new cases were recorded. Boris Johnson himself makes only vague statements: "I know that some people think that we should give up and let the virus go its way, despite the huge human losses that could potentially be. But I don't think that's what the British people want." According to Johnson, "the country is in a critical situation," but the Prime Minister does not answer the question of why the country was unprepared for the second "wave" of the pandemic.

We can only once again note that for the economy, the pandemic is much worse than Brexit or the absence of trade agreements with the United States or the European Union. However, since the country is ruled by Boris Johnson, who has already received an unofficial nickname in Britain "Brexit Prime Minister", he decided that one trouble will not prevent another. Now the Kingdom has lost 20% of GDP in the second quarter and 40,000 lives, the second "wave" could claim more lives and percent of GDP in the third and fourth quarters (current levels of disease in the early "wave" is already above the maximum levels the first "wave"), in addition to this, agreements with the EU and the US on free trade "do not smell", and Johnson managed to fall out with Brussels and now, most likely, London will face long litigation and the destruction of international reputation and prestige. We have written several times about Boris Johnson's victories as Prime Minister, but this list has not expanded beyond one point. But Johnson's list of defeats is growing. Unfortunately, ordinary Britons will have to pay for everything, who gave all the power in the country to one person.

As for the prospects of the pound/dollar pair, the quotes remained above the moving average line, so the upward trend is still maintained. As we said earlier, we need to pay more attention to technical factors now, as all macroeconomic statistics continue to be ignored by market participants. The general fundamental background is extremely important, however, it remains approximately the same in the US and Britain. Equally bad. Thus, the pound/dollar pair remains one of the most difficult pairs at this time.

On the last trading day of the week in the States, a rather important report is scheduled to be published – Nonfarm Payrolls – the number of new jobs created outside the agricultural sector. However, as we have already said, traders now ignore any statistics. Today may be the same picture. Thus, it is not desirable to skip this report, however, you can't expect a serious market reaction. 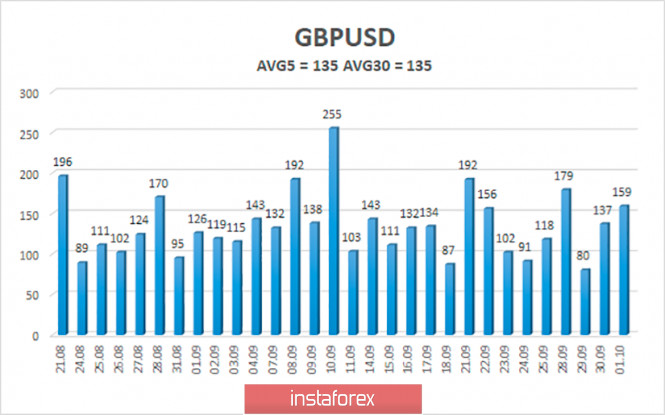 The average volatility of the GBP/USD pair is currently 135 points per day. For the pound/dollar pair, this value is "high". On Friday, October 2, therefore, we expect movement inside the channel, limited by the levels of 1.2756 and 1.3026. A new reversal of the Heiken Ashi indicator downwards signals a new round of corrective movement.

The GBP/USD pair resumed its upward movement on the 4-hour timeframe, bouncing off the moving average line once again. Thus, today it is recommended to stay in the longs with the goals of 1.2939 and 1.3000 as long as the Heiken Ashi indicator is directed upwards. It is recommended to trade the pair down with targets of 1.2787 and 1.2756 if the price returns to the area below the moving average line.