Overview of the GBP/USD pair. October 21. Boris Johnson wanted to get a trade "deal" with the European Union in 6 months. 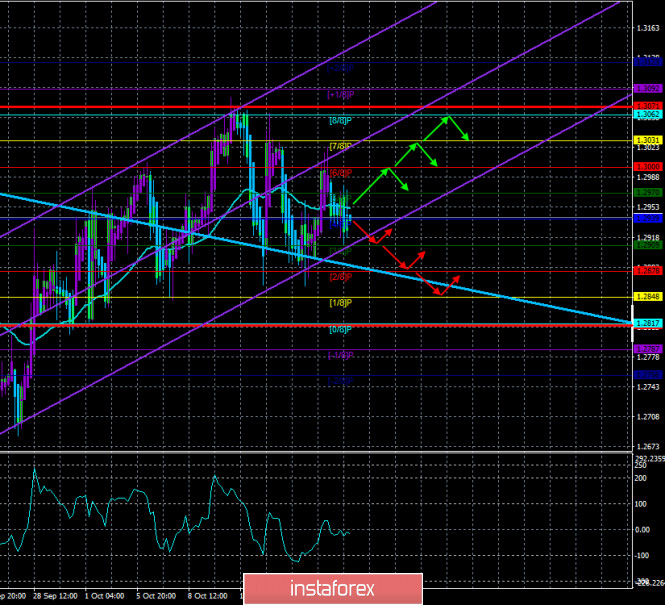 The British pound sterling paired with the US currency continues to trade in a "storm mode". Over the past day, the pound/dollar pair changed its direction several times, and each time the market was nervous. Thus, based on the results of the past day, no conclusions can be drawn at all except that the "swing" continues, the trend continues to be absent, and it is extremely difficult to trade the pair now. Therefore, we recommend that you trade the pair very carefully at this time. We have repeatedly written that the fundamental background for the GBP/USD pair is very complex and multifaceted. The position of the British pound is under pressure from Brexit, which will take place in 10 weeks, the lack of a deal with the European Union, the high probability of no trade deal with the United States, as well as a lot of other "pleasant" moments related to the "divorce" with the EU. The position of the US currency is under pressure from the upcoming US elections and the uncertainty associated with the American future and its economy. Also, the Democrats and Republicans still cannot agree on a new package of the economy, respectively, the economy does not receive incentives, and may start to slow down again.

Meanwhile, Brexit negotiations may finally fail in the near future. Both sides do not see progress in the negotiations and also continue to accuse the opposite side of a lack of desire to concede. London, for example, believes that the European Union is not ready to compromise and sees no point in resuming negotiations at all. "There is no point in resuming the negotiation process as long as the EU adheres to the current position. Such negotiations will be meaningless and will not bring us closer to a workable solution," said Michael Gove. But Michel Barnier, who is responsible for negotiations on the EU side, believes that the parties need to intensify negotiations. However, we have heard and seen all these beautiful statements more than once. Or more than a dozen times. The fact remains that no one wants to give in, but no one wants to complete the "divorce" without a "deal". Thus, both sides pretend that they are ready for a "hard" Brexit, but at the same time negotiations continue, deadlines are postponed. Both London and Brussels have also repeatedly stated that they have begun preparing their territories for a "no-deal" regime.

However, this should have been expected from the very beginning of the negotiations. The "smart" position of Boris Johnson is that he wanted to get an agreement with the EU in 6 months of negotiations, with the one that London wants to get, and not fulfill any requirements from the EU. The fact that the "Canadian" version of the agreement was discussed with Canada itself for 7 years, Johnson does not care. He refused to extend the "transition period" and is now reaping the benefits of his "genius" foreign policy. No matter what anyone says, it is the British economy that will suffer the most from the lack of a free trade agreement. This is logical since the UK enjoys a huge European market consisting of several hundred million consumers. But it will stop using it duty-free and without restrictions from January 1, 2021. The European Union will lose only 66 million consumers. Also, there will be financial and logistical problems. First, many groups of goods that will be transported across the British-European border may be in short supply or seriously rise in price. Secondly, the number of trucks that will be sent from Europe to England and back will not increase, but the time spent on cargo inspections will increase, which will cause serious congestion of ports and roads leading to them. It was calculated that on average, each truck will spend several days not crossing the border.

Also, do not forget about the "Scottish question". We have repeatedly reported that Nicola Sturgeon is not going to back down and let the issue of a new independence referendum take its course. So, potentially over the next few years, Britain could also lose Scotland. The UK, accordingly, already has a lot of problems. And there will be even more. The British and their government wanted to get rid of dependence on the EU and trade as they please with the whole world, but so far the Kingdom is moving at full speed into a financial hole. And the situation is further aggravated by the "coronavirus" epidemic, which continues to gain momentum in the Foggy Albion. It is hardly necessary to say once again that the stronger the second "wave" in Britain, the more the British economy will shrink, the more dissatisfaction British citizens will be with the policy of Boris Johnson. Thus, the issue of Boris Johnson's resignation may be on the agenda next year, and the Prime Minister's party members may initiate it. All this potentially means a new pile of problems for Britain. Consequently, the British pound will live without fundamental support.

In the near future, trading in different directions is likely to continue. Therefore, traders should clearly understand the current picture of things before opening any trades. As for expediency, it is not the worst option now to refuse to enter the market before the onset of calm and measured trading. 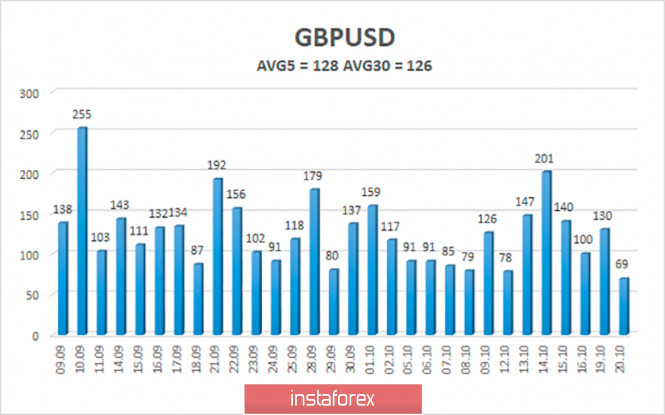 The average volatility of the GBP/USD pair is currently 128 points per day. For the pound/dollar pair, this value is "high". On Wednesday, October 21, therefore, we expect movement inside the channel, limited by the levels of 1.2815 and 1.3071. A reversal of the Heiken Ashi indicator to the top signals a new round of upward movement.

The GBP/USD pair started a new round of downward movement on the 4-hour timeframe. Thus, today it is recommended to trade lower with the targets of 1.2909, 1.2878, and 1.2848 until the Heiken Ashi indicator turns up. It is recommended to trade the pair for an increase with targets of 1.3000, 1.3031, and 1.3062 if the price returns to the area above the moving average line.

Interesting? Write a comment below.
 #Overview of the GBP/USD pair. October 21. Boris Johnson wanted to get a trade "deal" with the European Union in 6 months.
Forward 
Backward 