Overview of the GBP/USD pair. October 22. Brussels insists and will continue to insist that European fishermen have access 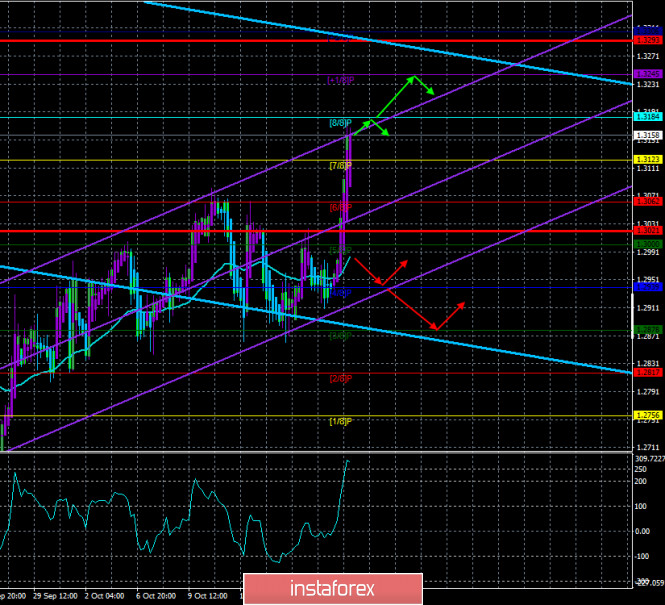 The British pound sterling paired with the US currency continues to fling from side to side. After several days of relatively quiet trading, the pound/dollar pair again plowed more than 200 points for the day yesterday. As usual, there was no good reason for the British pound to do this. During the day, there were no important statistics or important speeches by Boris Johnson or any of the EU authorities who could claim that some progress had been made in the Brexit negotiations, which would have caused the pound to strengthen. No, there was nothing like that, however, the pound has risen again, and we can only wait for the "storm" to end since it is extremely difficult to predict the movement of the pair now. Moreover, there is no influence on the fundamental background of the pair at the moment. The pound is growing despite the highest probability of a "divorce "of the UK from the European Union without a "deal". And if we were talking about the euro/pound pair, then the pound could theoretically strengthen since the lack of a deal is also a blow to the Eurozone economy. However, we are talking about the pound/dollar pair.

The "coronavirus" in the UK is of no small importance now, which will also leave its mark on the already weakened economy in any case. In the Foggy Albion, the second "wave" began, which is already four times stronger than the first. But this is only the beginning. According to the Johns Hopkins Institute, more than 20,000 people have been infected in Britain over the past day. Thus, firstly, the number of diseases continues to grow, and secondly, the current levels of morbidity are four times higher than those recorded in the spring. And, as we said, this is just the beginning. The cold season (when there is a sharp increase in diseases of various viruses, flu, colds) is still ahead, which means that the number of diseases may continue to grow.

Meanwhile, UK business and manufacturing continue to sound the alarm. It is reported that the absence of a deal with the European Union for the automotive industry in Britain will be much more terrible and dangerous than the "coronavirus crisis" and its consequences. It is reported that the British car industry exports more than 50% of all its products to the European Union. Accordingly, if there is no "deal" between the parties, then exports to the EU countries will be greatly reduced due to the banal rise in the price of cars produced in Britain. The same applies to many international car manufacturers. For example, Japanese or German companies that also actively exported their products to Britain.

At the same time, the President of the European Council, Charles Michel, does not see the point in principle to continue negotiations on a Brexit deal. According to Michel, it was not the European Union that initiated the "divorce", it was not the European fishermen who decided on Brexit. Thus, he does not understand why it is the Europeans who should go along with London and try to please them with a trade agreement? According to Michel, European fleets will be irreparably damaged if access to British waters is closed. The head of the European Council also believes that the UK wants to maintain access to a huge and diversified European market, just as the European Union wants to maintain access to its fishermen in British waters. Charles Michel also added that there is no point in discussing, signing, and ratifying the agreement with London if it is incomplete. Thus, Charles Michel once again showed that Britain will not get access to the European market if it does not also agree to make concessions and demands from Brussels. Given the fact that the final divorce between the parties is less than 10 weeks away, and there is still no progress, we would also recommend that market participants prepare for the absence of an agreement. Perhaps it will be signed later because no one forbids the parties to continue negotiations in 2021. However, you can not count on it until the New Year.

And despite all this news, the British currency continues to strengthen. However, the European currency continues to grow, but only within the side channel. Both major currency pairs have been very poorly correlated with each other in recent months, however, it can now be assumed that both euro currencies are growing due to the US dollar and falling demand for it. Still, election day is approaching in the United States, which means that the tension and uncertainty associated with the future of the country and its economy are growing. Thus, theoretically, the growth of the pound and the euro can be associated with the same elections in America. However, the probability of this is not too high.

Meanwhile, Speaker of the House of Representatives Nancy Pelosi "forgot" about her deadline in negotiations with Republicans and expressed hope that the parties will still be able to reach an agreement on a new stimulus package for the American economy before this weekend in a conversation with Treasury Secretary Steven Mnuchin. The White House also expressed hope for an agreement and said "both sides are working hard". However, the markets are already tired of receiving information in the form of "parties continue to work hard". Traders need concrete results of these negotiations or their completion to draw clear conclusions and build new trading strategies based on them. Until then, the pound/dollar pair may remain a "storm". After yesterday's strong growth, today we may see an equally strong drop in quotes. 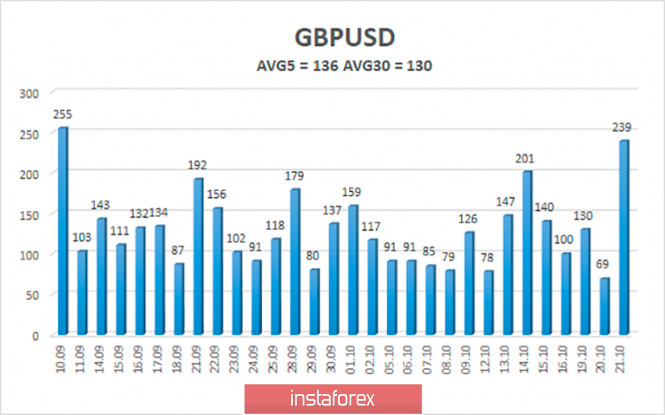 The average volatility of the GBP/USD pair is currently 136 points per day. For the pound/dollar pair, this value is "high". On Thursday, October 22, thus, we expect movement inside the channel, limited by the levels of 1.3021 and 1.3293. A reversal of the Heiken Ashi indicator downwards signals a round of downward correction.

Interesting? Write a comment below.
 #Overview of the GBP/USD pair. October 22. Brussels insists and will continue to insist that European fishermen have access
Forward 
Backward 