Overview of the GBP/USD pair. October 23. Boris Johnson complained about the EU for a week and finally decided to resume 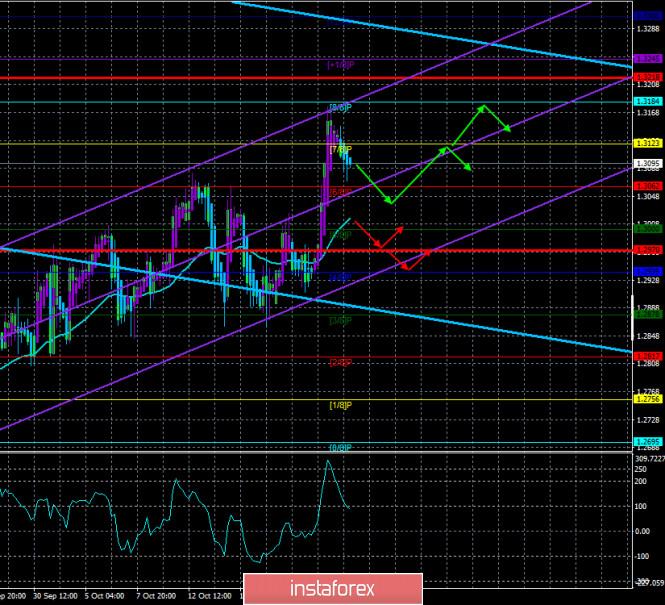 The British pound sterling paired with the US currency also began to adjust, synchronously with the European currency. Thus, the conclusion is that the growth of the British currency in recent days was not triggered by the fundamental background from the UK. We have repeatedly drawn traders' attention to the fact that the fundamental background from the Foggy Albion cannot physically support the pound right now. Thus, we believe that the reason lies in the dollar, as the country continues to have a clear political, economic, and epidemiological crisis. Another thing is that the situation in the UK is no better, and the Kingdom can "boast" of its similar crises. However, if you look at the daily timeframe, you can still conclude that the British currency began to fall on September 1, when there was information about the failure of the next two rounds of Brexit negotiations, as well as information about the scandalous "Johnson bill". Since about September 23, the British currency has been strengthening, however, we can assume that this is a prolonged correction, after which the downward movement will resume. As we have repeatedly noted, the foundation from Britain overlaps with its negative Foundation from the United States. Thus, it is the resumption of the fall in the pound/dollar pair quotes that will be the logical development of events.

Meanwhile, the British statistical office published data showing that the country's national debt is approaching a sixty-year high. The office reports that in 1960, the high level of the national debt was justified by the consequences of the second world war and the loss of Britain's colonies. At the same time, the highest level of public debt and the budget deficit was caused by Brexit and the coronavirus pandemic. At the end of the first half of the current financial year, the net national debt is 2.06 trillion pounds, which is 260 billion more than a year earlier. The agency also predicts that this indicator will continue to grow, since Brexit is not yet complete, and it was not possible to cope with the pandemic. Thus, it is not for nothing that we have repeatedly warned that the problems of the British economy are just beginning and they will continue in 2021. It is very strange how, with all this news, the Bank of England continues to hold back from lowering the key rate and expanding the quantitative easing program. Although at the expense of the second, no one has any doubt that it will be applied at the next meeting of the British regulator.

Meanwhile, this article could be called "Not a day without Brexit". This time, the main news provider was Boris Johnson, whose strategy is extremely difficult to analyze. The British Prime Minister set an October 15 deadline for negotiations in September. Today is October 22 and, after a week of accusing the European Union of all deadly sins, Johnson decided to continue negotiations with Brussels. Thus, in the near future, the groups of Michel Barnier and David Frost will once again start discussing the most controversial issues. The office of the British government made an official written statement, which is full of theses that we have all heard a huge number of times. "It is quite possible that the negotiations will not be successful. If this happens, Britain will end the "transition period" and start trading with the European Union on the same terms as Australia did. It is now important that British businesses and all market participants actively prepare for the end of this "transition period", whether a trade agreement is concluded or not," the statement said. Thus, as we said earlier, the parties will continue negotiations, despite mutual accusations and reproaches, because it is not profitable for both sides to have no agreement and negotiations can be conducted for as long as necessary. What prevents the negotiating teams from continuing to work in 2021? Boris Johnson with his deadlines? Johnson can easily take back his words, but he does not want to trade with the EU on WTO terms for many years. Thus, the EU and the Kingdom can start 2021 without any agreement, but the negotiations will continue no matter what.

At the same time, the British media and periodicals are asking what has changed in the positions of both sides "fundamentally"? All right, negotiations have resumed or continued (the wording is unimportant), but what has changed if the previous rounds ended without tangible progress? Boris Johnson, for example, said that he sees no point in continuing negotiations at all if the European Union does not radically change its position. Approximately the same words were voiced by the head of the European Council, Charles Michel. But at the same time, the parties continue negotiations. Maybe "meaningless negotiations"?

In general, from our point of view, just as the fundamental background does not change in the United States, it does not change in the UK. Thus, from a fundamental point of view, we believe that the pound will resume falling in the near future unless the market receives fundamentally new and extremely important information. At the moment, after the fall in early September, the pair's quotes have already been corrected by 61.8%, which is an important Fibonacci level. Thus, a rebound from this level and a resumption of the downward movement with targets below 1.2700 is even more likely. How the election will affect this plan will be clear closer to the election itself. So far, the price continues to be located above the moving average line, so it is too early to speak out loud about changing the trend to a downward one. 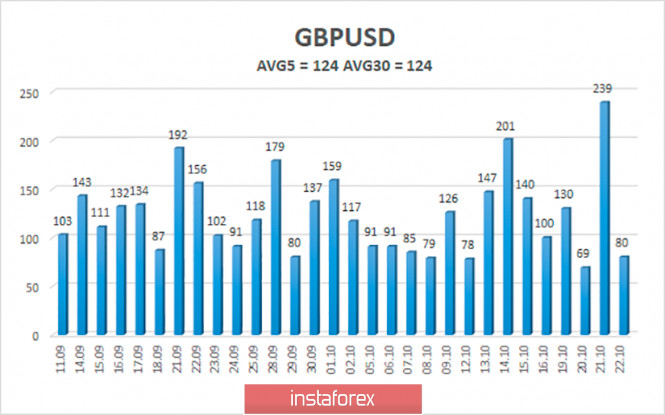 The average volatility of the GBP/USD pair is currently 124 points per day. For the pound/dollar pair, this value is "high". On Friday, October 23, thus, we expect movement inside the channel, limited by the levels of 1.2970 and 1.3218. A reversal of the Heiken Ashi indicator-up signals the end of the downward correction.

Interesting? Write a comment below.
 #Overview of the GBP/USD pair. October 23. Boris Johnson complained about the EU for a week and finally decided to resume
Forward 
Backward 