Overview of the GBP/USD pair. October 26. Progress has been made in negotiations between Brussels and London. A deal is still 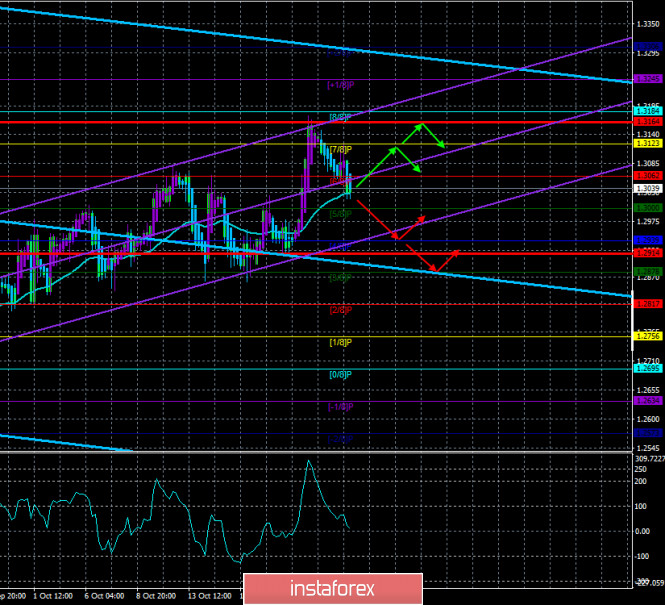 The British pound sterling, paired with the US currency, corrected to the moving average line on Friday. However, in general, there is still an upward trend, which raises a lot of questions. The fundamental situation for the pound/dollar pair remains extremely difficult. On the one hand, the US dollar is under pressure from the election situation and general instability and uncertainty in the US. On the other hand, the British pound is under no less pressure from Brexit, the prospects for the British economy, and the extremely low probability of signing a trade agreement with the European Union. However, both currencies cannot be under pressure at the same time. Therefore, one has to become more expensive, the second - cheaper. However, in general, we believe that the British pound will continue to fall in the long term. It is the prospects for the British economy that cause the greatest concern. Moreover, the pound has grown quite strongly in recent months, so it's time for it to start forming a downward trend even for technical reasons. This process may have already started on September 1. After the first round of the downward movement, a long correction followed, which may be completed in the near future. Recall that within this correction, the pair worked out the level of 61.8% Fibonacci. Thus, if there is no consolidation above this level, we would say that the probability of a new fall is extremely high. However, first, the pair needs to be fixed below the moving average line.

Meanwhile, today the British pound may rise again as the well-known British newspaper Telegraph said on Sunday that the UK and the European Union still began to give in to each other in the negotiations and a deal can still be concluded in the near future. The EU's chief negotiator, Michel Barnier, is going to stay in London until October 28 and continue working on the agreement, despite the progress made in the negotiations. However, the publication also reports that excessive optimism is still not appropriate now, since the shifts in the negotiations are not very large yet. London and Brussels have until October 31 to decide whether there is any point in negotiating further. According to unconfirmed reports and sources close to the UK government, it has become known that there is indeed progress, however, we would recommend waiting for official statements from the parties. However, most traders may not wait for these statements. For the pound in the last four years, rumors and expectations of traders are almost the only opportunities to get more expensive at least from time to time. That is why we assume that this currency may grow on Monday.

At the same time, we remind you that the differences between the EU and the Kingdom in their views on the trade agreement are significant. Therefore, it is far from a fact that the parties will still be able to agree. We also remind you that the following questions remain key. First, of course, the "fish" question. The UK does not want to provide access to its waters to European fishermen, which is why the fishing industry in many countries of the Eurozone may suffer significantly. Second, there is the issue of dispute settlement at the international level. The European Union wants the European Court of Justice to always have the last word, which, of course, London wants to avoid. Third, it is a question of fair competition between British and European companies, which is what the European Union wants to achieve. Fourthly, these are European standards and norms that the EU wants to force Britain to adhere to. Besides, the future of the "Johnson bill" remains completely unclear, as well as the situation and regime on the Northern Ireland border after December 31, 2020. Thus, we would not recommend that traders open the champagne and prepare large purchases of the pound.

Unfortunately for the British economy, signing a free trade agreement will only smooth out the negative impact of Brexit. So even if a deal is struck, it is far from certain that the British economy will be doing well in 2021. Most likely, the Bank of England will still be forced to reduce the key rate, which will move to the negative area. Market participants are also waiting for the expansion of the quantitative stimulus program in 2020. And most importantly, an epidemic against which there is still no vaccine (100% safe and proven) and which, according to WHO and many governments around the world, will continue to terrorize people until at least the spring and summer of 2021. And no one can say what will be the levels of morbidity in a month. The UK is already breaking all the anti-records of the first "wave". In the last three days, at least 20,000 cases were recorded daily, which is four times higher than the maximum levels in the spring, when the health system was already experiencing certain problems. If the number of cases continues to grow, then a "hard" quarantine is inevitable.

From a technical point of view, the upward trend is still maintained since the pair still manages to stay above the moving average line. We also once again point out that in general, trading on the pound/dollar has been extremely "ragged" in recent weeks. Quotes can go one way 200 points, and the next day the same amount in the opposite direction. Thus, now is not the most favorable time for trading, and fixing the price below the moving average does not guarantee that the pair will not resume its upward movement the next day. 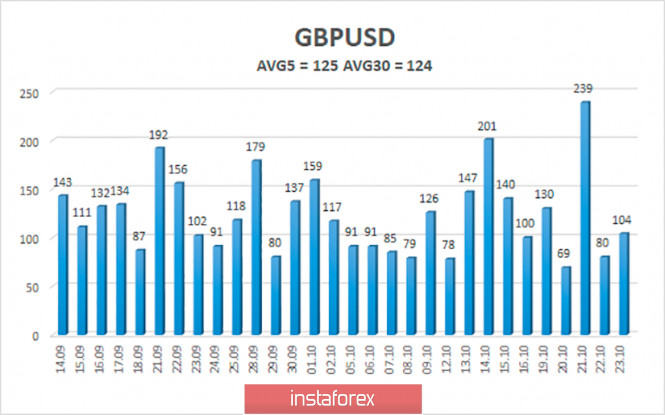 The average volatility of the GBP/USD pair is currently 125 points per day. For the pound/dollar pair, this value is "high". On Monday, October 26, thus, we expect movement inside the channel, limited by the levels of 1.2914 and 1.3164. A reversal of the Heiken Ashi indicator upward signals a possible resumption of the upward movement.

The GBP/USD pair started a round of corrective movement on the 4-hour timeframe. Thus, today it is recommended to trade for an increase with the targets of 1.3123 and 1.3164 if the Heiken Ashi indicator turns up or the price rebounds from the moving average. It is recommended to trade the pair down with targets of 1.2939 and 1.2914 if the price is fixed below the moving average line.

Interesting? Write a comment below.
 #Overview of the GBP/USD pair. October 26. Progress has been made in negotiations between Brussels and London. A deal is still
Forward 
Backward 