Overview of the GBP/USD pair. October 27. The second "wave" of COVID-2019 in the UK is already four times stronger than the 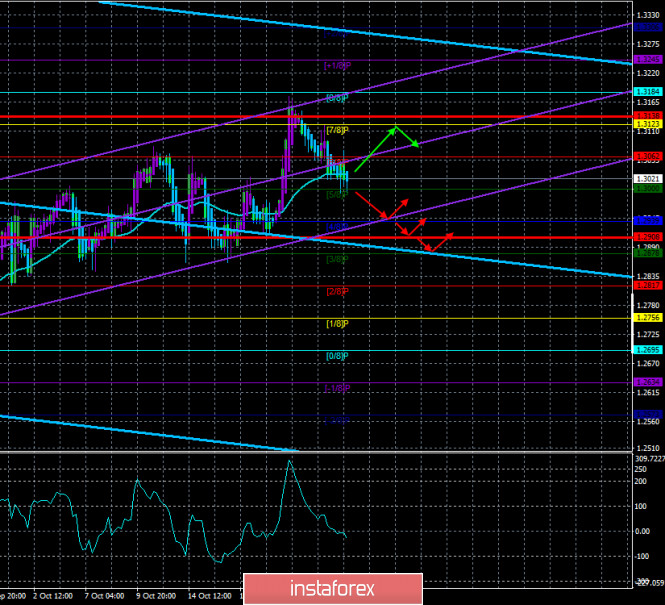 The British pound sterling paired with the US currency on Monday also traded quite calmly and fell to the moving average line in the first half of the day. There was no "supersonic" reaction to Sunday's information that the next round of talks in London was extended since the parties allegedly came to a certain compromise. The pound has not grown and continues to balance between North and South, between growth and decline. Thus, most likely, for once, traders did not work out unverified information that gave another hope for the successful completion of Brexit and the "divorce" between the EU and the Kingdom. From our point of view, technical factors are in the first place in the pound/dollar pair. We have already talked about the Fibonacci level of 61.8% (1.3170), which was worked out just perfectly. After that, a new round of downward movement began, which may develop into a new downward trend. This is supported by a huge number of factors, ranging from the most negative fundamental background from the UK to technical factors that suggest that after a six-month growth of the British currency, it is time for the dollar to move to growth. However, it is a difficult political situation and the upcoming elections across the ocean that are keeping sellers from active actions. However, we still believe that the downward trend will resume in the near future.

Thus, the next round of negotiations continues, and so far there is no official information. If this information is received, then the pound may perk up for a while and try to continue forming an upward trend. However, we still believe that the downward trend will resume in any case. If not now, then in a week. The fact is that even if the negotiations are successful, it will not save the British economy from another contraction. A "deal" can only smooth out the negative impact of Brexit on the economy, but not completely neutralize it.

And while the markets are waiting for information from the negotiations, they can only pay attention to the growing numbers of the epidemic in the Foggy Albion. Even in the first "wave", Great Britain was one of the first places in Europe in terms of the number of infected people and deaths. There it remains during the second "wave". In recent days, at least 20,000 cases a day have been reported in Britain. And, most likely, this figure will continue to grow, as the coldest time of the year is still ahead. Several coronavirus vaccines are still being tested in the UK, but even if the clinical trials are completed successfully, mass production of the vaccine should not be expected until next spring, and mass vaccination of the population should not be expected until the summer of 2021.

Meanwhile, almost 60 million people have already voted in the US. It is reported that this is more than half of those who registered for early voting. At the moment, 43% of the total number of citizens who voted in 2016 have already voted in America, which once again confirms the judgment about the highest degree of importance of the 2020 elections, if not in the history of the United States, then in recent decades for sure. In principle, the same opinion is held by Donald Trump himself, who has already voted "for a guy named Donald". At the same time, the US President continues to ride with campaign speeches in the most "controversial" states, where he shines with radiant smiles and exudes tons of optimism and confidence in his victory. Experts believe that this is almost the last chance of Donald's re-election. The fact is that Trump has already lost all the stronger trumps. There is a strong economy, low unemployment, and a strong labor market. Now Trump is more remembered for the 200 thousand victims of the "coronavirus", the strongest fall in the economy, the highest unemployment, and the trade war with China, in which it is the United States that is losing so far. All recent polls continue to point to Biden's 11% lead. Thus, experts now call Trump's only chance almost "mysticism", similar to 2016, when opinion polls also indicated that Trump lost the election.

However, the pound is now more interested in the factors of Brexit and the presence/absence of a trade agreement with the European Union. Since there was no news on Monday, we continue to recommend that traders pay attention to this technique. The main problem is that on the 4-hour chart, the technical picture now also looks not quite clear. Over the past few weeks, the price has repeatedly fixed below the moving average line and each time very quickly returned to the area above the moving average. Thus, these signals were simply false. Therefore, something similar may happen again at this time, so we recommend taking into account more global signals, such as a rebound from the Fibonacci level of 61.8% (1.3170) as part of the correction against the fall in quotes from September 1. This level can be considered as a "critical" level, above which the price is unlikely to leave. And if it does go above it, then you should review the entire trading strategy for the near future. The fundamental background can also influence the mood of traders at any time and it is impossible to predict in advance. 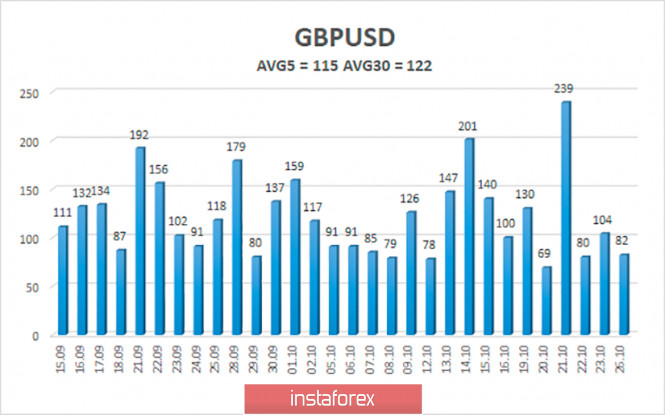 The average volatility of the GBP/USD pair is currently 115 points per day. For the pound/dollar pair, this value is "high". On Tuesday, October 27, therefore, we expect movement inside the channel, limited by the levels of 1.2908 and 1.3138. A reversal of the Heiken Ashi indicator-up signals a possible resumption of the upward movement. Please note that the last 4 out of 5 trading days ended with volatility lower than 104 points. So, the average volatility may be below 115 points per day.

The GBP/USD pair has started a new round of corrective movement on the 4-hour timeframe. Thus, today it is recommended to trade for an increase with the targets of 1.3123 and 1.3138 if the Heiken Ashi indicator turns up or the price rebounds from the moving average. It is recommended to trade the pair down with targets of 1.2939 and 1.2908 if the price is fixed below the moving average line.

Interesting? Write a comment below.
 #Overview of the GBP/USD pair. October 27. The second "wave" of COVID-2019 in the UK is already four times stronger than the
Forward 
Backward 