Overview of the GBP/USD pair. October 30. Brexit: no news. Markets continue to sit "on a powder keg" and wait for the results 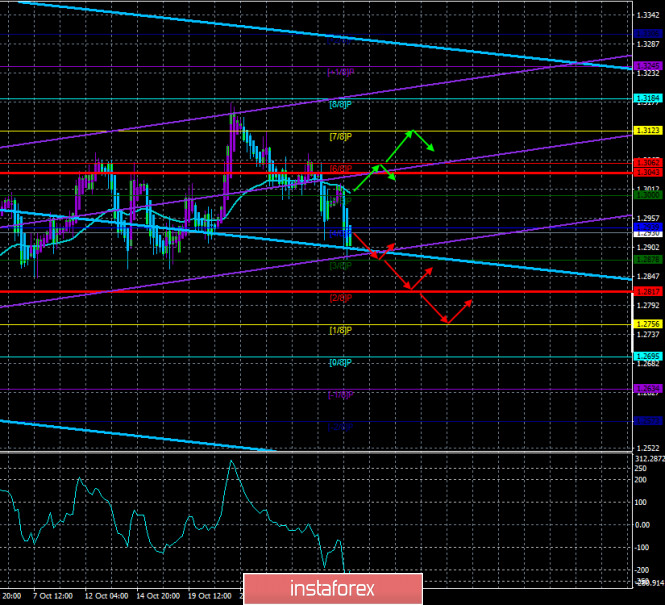 The British pound sterling was also trading lower against the US currency on Thursday. However, if in the case of the European currency, the decline may be within a sideways trend, then in the case of the pound sterling – the beginning of a new long downward trend. However, the situation for both major pairs is now so complex and confusing, and there are so many factors that can influence the mood of market participants, that it is extremely difficult to make any more or less accurate conclusion and forecast. Traders of the British pound continue to wait. They continue to wait for the US presidential election, as the future of the country, its domestic and foreign policy, as well as methods of fighting the "coronavirus", which the US authorities have simply "scored" on now, depends on it. This led to almost a record economic recovery in the third quarter (+33% of GDP), however, we are talking about human lives. Traders are also waiting for the results of the next round of negotiations between the groups of Michel Barnier and David Frost. Unfortunately, at the time of writing, no new information has been received. And when it will arrive is unknown. The talks were supposed to end yesterday, Thursday, but there were no speeches from top UK and EU officials in the press.

Meanwhile, the pound is fed up with everything. During this week alone, there were reports in the press that the parties allegedly managed to reach a compromise in the negotiations and "the negotiations broke the deadlock". Such reports appeared in the press when Britain was just agreeing on a deal on "divorce" with the EU, when Theresa May went to Brussels almost every week, then came to London, where the Parliament successfully blocked each new version of her agreement. Such optimistic rumors were constantly appearing, and they are still appearing now. But they have nothing to do with reality in 90% of cases. Because Brexit will be "tough" unless London and Brussels somehow manage to reach an agreement. For the parties to reach a consensus, we believe that it is Brussels that should concede, which needs it much less than London. But it was Brussels that insisted in recent weeks on intensifying negotiations. His desire to negotiate with Boris Johnson is visible to the naked eye, but a similar desire in London is not observed. Maybe we don't know anything about the whole situation? Maybe Boris Johnson has a trump card up his sleeve, with which he manipulates the European Union and diligently pushes through his version of the agreement? In any case, sooner or later, we will know the answer to this question. In the meantime, the British currency has started to become cheaper and is likely to continue to do so in the coming days. We recommend that traders conduct extremely cautious trading since the factor of the US election has not been canceled either. In terms of the fundamental background, the entire market is now sitting "on a powder keg". Any news from the US or the UK can have the status of "extremely important" and the markets will significantly increase volatility.

A separate topic for the British pound is the "coronavirus" epidemic. We all witnessed how Angela Merkel and Emmanuel Macron officially announced new "lockdowns" in Germany and France yesterday. This is approximately the same situation in the UK. According to Johns Hopkins University, the total number of cases of "coronavirus" in Britain is approaching one million. On October 28, about 25,000 new cases of infection were recorded, which is not much lower than in France or Germany. To be more precise, this is the same as in Germany or Italy. Only Spain and France are solidly ahead of other European countries in this terrible ranking. Thus, Boris Johnson may soon have to introduce a "lockdown" or again tighten quarantine measures, which, in principle, is the same thing. The US economy contracted by 31% during the first "wave", but grew by 33% in the third quarter. The British economy lost 20% in the second quarter and may grow by 15% in the third quarter. Thus, even preliminary forecasts suggest that the pace of recovery in the British economy is much weaker than in the US. This means that the British currency is even more inclined to a new prolonged fall. Its economy is not only recovering worse but may also be closed for a second "lockdown". The Bank of England may switch to negative rates in the near future. There may not be a deal with the European Union, and even if it is, the blow to the economy due to Brexit in 2021 will still be inflicted. Therefore, we continue to insist that the prospects for the British economy remain very negative, and the prospects for the British pound are vague.

From a technical point of view, the pound/dollar pair has fixed below the moving average line, so the trend has changed to a downward one. Thus, in the short term, we expect the downward movement to continue. The downward movement is also supported by the senior linear regression channel and the downward-pointing Heiken Ashi indicator. The main problems now are still uncertainty. We hope that after November 3, it will become more or less known about the results of the US elections, as well as the results of the next round of negotiations in London. This information can relax the markets a bit and allow them to trade more freely. If you look at the chart carefully, you can see that in the last month, the pound/dollar pair very often changed the direction of its movement, fixed above the moving average, then below it, which only complicated the trading process. We also remind traders about the important level of 1.3170, which is 61.8% of the Fibonacci from the fall of quotes from September 1. The price bounced back from it, "like a textbook", and we believe that this is a very strong signal for further movement to the south in the long term. 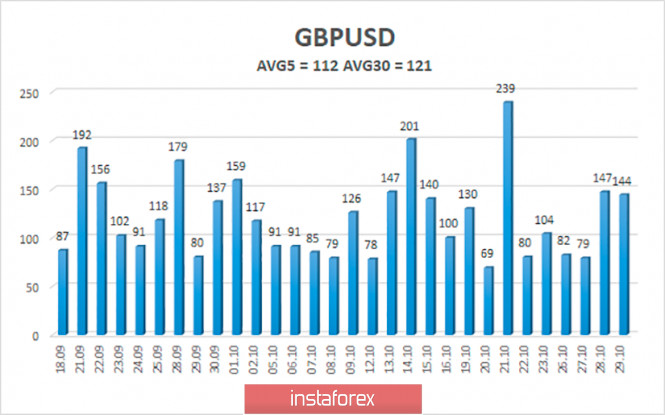 The average volatility of the GBP/USD pair is currently 112 points per day. For the pound/dollar pair, this value is "high". On Friday, October 30, therefore, we expect movement inside the channel, limited by the levels of 1.2818 and 1.3043. A reversal of the Heiken Ashi indicator-up signals a round of corrective movement within a likely new downward trend.

The GBP/USD pair started a new round of downward movement on the 4-hour timeframe. Thus, today it is recommended to stay in short positions with targets of 1.2878 and 1.2817 as long as the Heiken Ashi indicator is directed down. It is recommended to trade the pair for an increase with targets of 1.3062 and 1.3123 if the price is fixed back above the moving average line.

Interesting? Write a comment below.
 #Overview of the GBP/USD pair. October 30. Brexit: no news. Markets continue to sit "on a powder keg" and wait for the results
Forward 
Backward 