Overview of the GBP/USD pair. October 5. Boris Johnson blamed the EU. David Frost "began to see the outlines of a trade agreement" 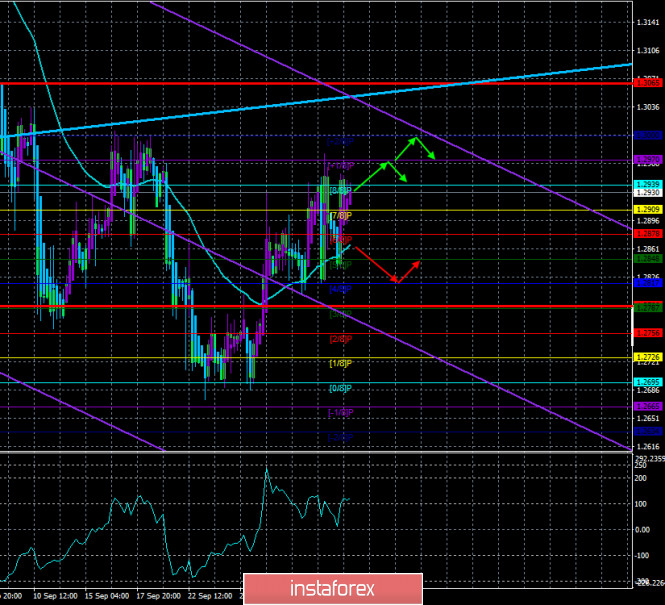 On Friday, October 2, the British pound continued to be in the "storm" mode. The pair's quotes continued to be tossed from side to side. In principle, this behavior of market participants is quite justified, since recently news of such a plan has been received from the UK that it was really time to panic. However, the fundamental background on the last trading day of the week became even more unclear, and reports about the illness of Donald Trump did not add to the calmness of market participants and did not lift their spirits. As a result, the pound once again corrected to the moving average line, then bounced off it, and resumed its upward movement. However, it again failed to overcome the Murray level of "+1.8" - 1.2970, which is located very close to the psychologically important mark of 1.3000. This mark was not overcome by buyers two weeks ago, so there is reason to assume that this time the attempt to continue moving north will be unsuccessful. In the situation with the pound, it should be understood that the fundamental background is now equally bad for it and for the US dollar. Therefore, if the European currency can really continue to rise in price against the dollar, then the strengthening of the pound is a very big question. We would even say that the pound is the main contender for a fall in the last quarter of 2020, given all the events of recent weeks.

After the European Union officially notified London and Boris Johnson that it was starting legal proceedings against the UK and its non-compliance with the Brexit agreement, Boris Johnson became restless and once again began to gather for an official visit to Brussels to hold talks with the head of the European Commission, Ursula von der Leyen. The meeting was scheduled for last weekend, and the results are still unknown. However, in principle, we do not understand what Johnson wants to achieve with this meeting? The European Union has been threatening for about a month that it will start legal proceedings if London does not withdraw the "Johnson bill". Instead, the UK Parliament approved the bill in the second reading. Thus, what Johnson wants to achieve with a visit to Brussels is unclear. Moreover, it is already absolutely clear to everyone that the European Union is not "led" to attempts of blackmail and bluff, which are regularly used by the British Prime Minister. Ursula von der Leyen stated: "The situation in the Brexit negotiations remains very difficult. We have already announced that the internal market bill directly contradicts the terms of the Brexit deal, in particular the protocol on the border between Ireland and Northern Ireland. We asked our British colleagues to review this act within a month, but they refused."

Meanwhile, Boris Johnson himself very cleverly "threw the ball" to the side of the European Union, saying that he wants to conclude an agreement with the European Union to avoid a "hard" Brexit at the end of the year. "I hope we make a deal, but it's up to our friends," Johnson said. Also, the British Prime Minister has once again stated that he wants to get an agreement on the type of Canadian or Australian. In our humble opinion, Johnson's plans will not be implemented, because, to paraphrase the Prime Minister, it turns out "we want to get the agreement we want, and we are not ready to give in."

Also last week, the ninth round of negotiations on a trade agreement between the EU and Brussels ended. At the end of this week, British negotiator David Frost said that "we are beginning to see the outlines of a future agreement, although there are still a lot of contradictions". Also, David Frost absolutely does not understand why the EU does not want to make concessions to London and give them the same agreement as with Canada. "They have signed an agreement with Canada that we would like to have. So why can't they make it with us? We are very close, because we have been members of the EU for 45 years," says Frost. But the EU's chief negotiator, Michel Barnier, does not share the optimism of his British counterpart. "The round ended with serious disagreements remaining on the main important issues," Barnier said. Both sides note that most of the differences remain in the "fishing issue". In general, from our point of view, the parties are not so much closer at the end of the next round. Recall that the parties are going to complete the negotiations before October 15. At least London is going to finish. We believe that negotiations will continue beyond this date. It's just that if an agreement can still be reached, for example, in December, then it will be ratified next year, so both sides will live without a trade agreement for several months. However, London and Brussels have already started to clash over the draft law "on the internal market", which will greatly complicate any negotiations in principle.

Thus, by and large, there is no positive news for the pound. If it were not for the difficult political, economic, and epidemiological situation overseas, we would give about an 80% probability that the fall of the British currency will resume. However, it is the failed fundamental background in the US that continues to keep the pound afloat. The prospects for this currency and the currency pair are not fully defined at the moment. In the next month or even until the very end of the year, serious questions will be resolved about who will become the next US President, how Donald Trump will be treated, what will be the future negotiations and relations between London and Brussels. And any of these topics can potentially send the pair down or up 500 points or even more. Thus, for the coming weeks and months, we recommend that all traders, as they say, keep their finger on the pulse of the market. Although even taking into account the negative fundamental background in America, we still tend to believe that the fall of the British currency will resume. The GBP/USD pair is bitterly held above the moving average line, and buyers do not have enough strength to continue moving north. 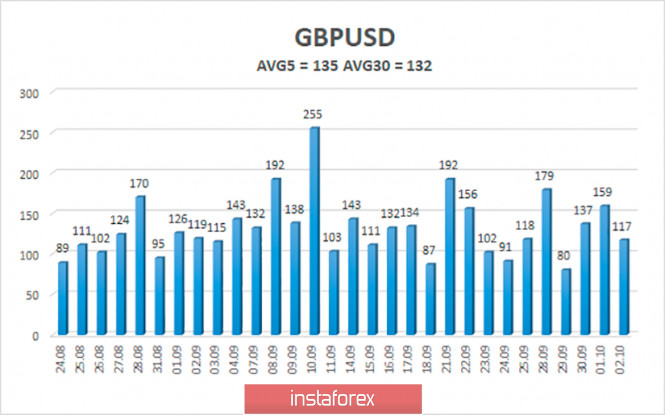 The average volatility of the GBP/USD pair is currently 135 points per day. For the pound/dollar pair, this value is "high". On Monday, October 5, therefore, we expect movement inside the channel, limited by the levels of 1.2790 and 1.3065. A new reversal of the Heiken Ashi indicator downwards signals a new round of corrective movement.

The GBP/USD pair on the 4-hour timeframe hardly continues its upward movement, bouncing off the moving average line once again. Thus, today it is recommended to stay in the longs with the targets of 1.2970 and 1.3000 as long as the Heiken Ashi indicator is directed upwards. It is recommended to trade the pair down with targets of 1.2817 and 1.2787 if the price returns to the area below the moving average line.