Overview of the GBP/USD pair. October 6. The European Union was saved from the onslaught and pressure of Boris Johnson. The 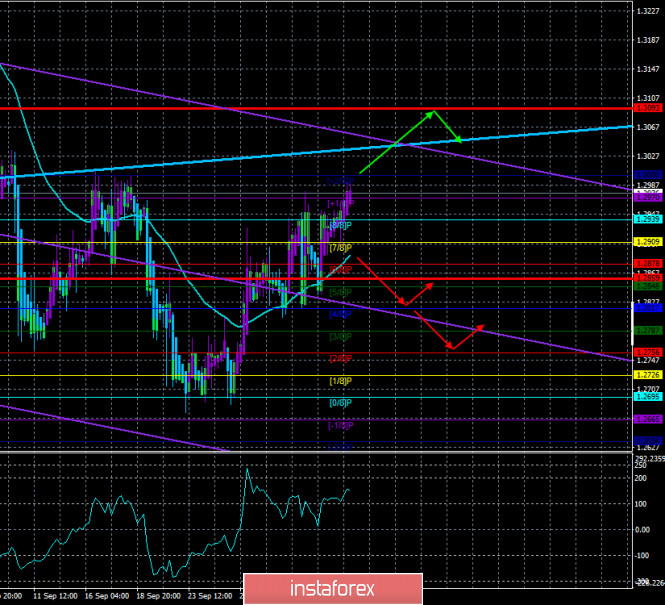 On Monday, October 5, the British pound continued to trade with minimal upward bias. Formally, the upward trend for the pound/dollar pair remains, since the price is still consistently above the moving average line. However, we still consider the pound sterling to be the weakest currency on the market at this time. And its strengthening in recent days raises many questions. Yes, no currency can rise or fall forever. And since the beginning of September, the pound has fallen by 8 cents. Thus, it is possible that now we are just seeing a correction, after which the downward movement will resume. Moreover, we have repeatedly talked about the level of 1.3000, which is a psychologically important level and which may not let the pair go further up. Therefore, despite the fact that the upward trend is still maintained, we still believe that there is more chance of a new fall in the pound.

The European Union has gone back on its word. This is how you can describe what is happening now between London and Brussels. Recall that the European Union has taken a tough position on the "Johnson bill", which violates the principles of international law and the existing agreement with the EU on Brexit. The European Union behaved as it should in a situation where agreements are changed unilaterally – it threatened legal proceedings. London did not meet them halfway and the Parliament approved the "Johnson bill". In addition, the eighth and ninth rounds of negotiations on a trade deal also did not bring any success. Thus, this weekend was scheduled for a conversation between the head of the European Commission Ursula von der Leyen and British Prime Minister Boris Johnson. Two high-ranking officials were supposed to discuss the situation and try to find a way out of it. Earlier, Boris Johnson repeatedly stated that the deadline for negotiations with the EU is October 15. However, just as last year, when Boris Johnson punched himself in the chest and declared that "I'd rather die in a ditch than postpone Brexit to a later date" when it was necessary, the Prime Minister easily forgot about all his previous statements and moved the deadline a month ahead. What exactly the head of the European Commission and the British Prime Minister said is unknown. The parties agreed to continue negotiations, but immediately everyone had one question: what is the point? London and Brussels could not agree on a deal in 6 months. At the same time, neither London nor Brussels clearly showed excessive zeal in the negotiations. No one wanted to give in on key issues and, in fact, these issues remain unresolved to this day. Thus, it seems that we are waiting for an additional month of unsuccessful negotiations, which both sides will spend simply on throwing the ball to the other half of the field.

And it is not at all clear what will happen now with the trial, which the European Union seems to have already initiated. Will it be paused? How is Brussels going to continue to negotiate with London, if the British Parliament has already approved the "Johnson bill"? So Brussels suddenly stopped abruptly condemning Britain for its "internal market" bill? And if the parties fail to reach an agreement on a trade agreement, will the legal proceedings resume? In general, to be honest, the whole situation with Brexit before was very similar to the TV series "Santa Barbara".

Well, who really wants to listen to in this situation is the most honest, direct, and frank Michel Barnier, who clearly sums up the results after each round of negotiations, without any fantasies and dreams. At the end of the ninth round of negotiations, Barnier noted minimal progress towards an agreement, noted "positive evolution", but also said that serious differences on all key issues remain in force. Michel Barnier believes that the future partnership between the UK and the EU should be based on absolutely clear and transparent rules. This concerns compliance with various standards, fair and healthy competition, a fair judicial system, and other issues. Barnier also noted that the EU still believes that European fishermen should have access to British waters. Also, the chief negotiator from the Kingdom believes that the protocol on the Northern Irish border should be implemented by London, otherwise it will be extremely difficult to conclude a deal. Such is the case in the British Kingdom.

Well, for the pound, all this news does not mean anything good. At this time, the British currency continues to grow moderately, but at any time it can resume falling. Yes, the recent events described above give hope that the parties will still be able to agree on a deal. Or at least they give extra time for a miracle to happen. Thus, in the coming month, the pound may even show moderate growth, especially against the background of everything that is happening now in the United States. However, in general, we believe that it is the UK currency that remains the weakest and with the worst prospects. Moreover, the second "wave" of the "coronavirus" has begun in the UK. On October 4, 23 thousand new cases of the disease were registered. For a second, at the peak of the first "wave", no more than 5.5 thousand cases were registered daily. Thus, the second "wave" of the pandemic may not even be twice as strong as the first, but several times stronger. And its negative impact on the British economy may be much larger than in the second quarter. 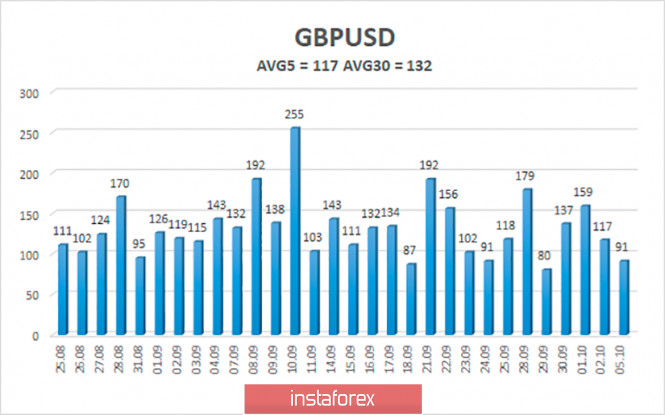 The average volatility of the GBP/USD pair is currently 117 points per day. For the pound/dollar pair, this value is "high". On Tuesday, October 6, therefore, we expect movement inside the channel, limited by the levels of 1.2859 and 1.3093. A new reversal of the Heiken Ashi indicator downwards signals a new round of corrective movement.

The GBP/USD pair on the 4-hour timeframe hardly continues its upward movement, bouncing off the moving average line once again. Thus, today it is recommended to stay in the longs with the goals of 1.3000 and 1.3093 as long as the Heiken Ashi indicator is directed upwards. It is recommended to trade the pair down with targets of 1.2817 and 1.2756 if the price returns to the area below the moving average line.

Interesting? Write a comment below.
 #Overview of the GBP/USD pair. October 6. The European Union was saved from the onslaught and pressure of Boris Johnson. The
Forward 
Backward 