Overview of the GBP/USD pair. October 9. The second "wave" of the epidemic in the UK is gaining momentum. Democrats and Republicans 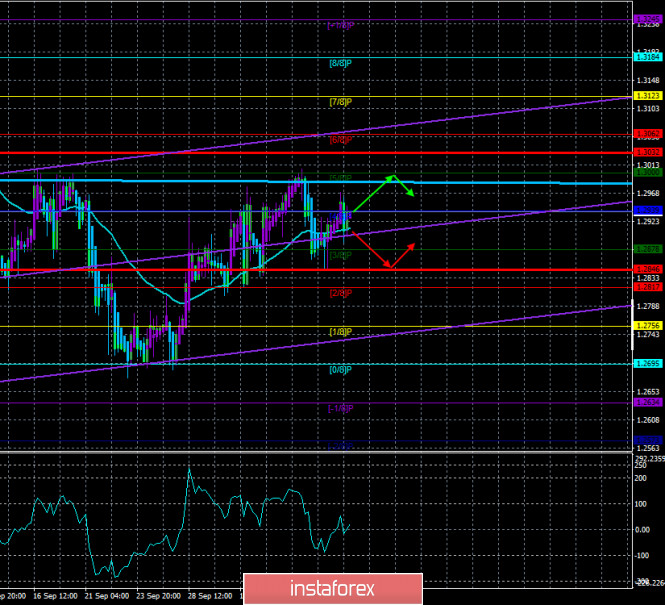 The British pound also traded calmly on Thursday, October 8. The pound/dollar pair made several more attempts to overcome the moving average line. Nevertheless, the key point remains the rebound of quotes from the Murray level "5/8" - 1.3000, from which the price fought off on September 16. Thus, buyers failed twice to take the pair above the psychologically important mark of $ 1.30. Consequently, the prospects for further appreciation of the British pound are very doubtful. We believe that the British pound should resume its downward trend long ago because there is no positive news from the Foggy Albion. Moreover, each next news item is "more gorgeous" than the previous one. Only a little less "perfect" fundamental background from overseas allows the British currency to stay afloat. However, this is unlikely to continue forever. We have already said that in a little more than three weeks, the issue with the new US president will be closed (unless, of course, any party initiates legal proceedings regarding the election results). But even if something goes wrong, by December or January at the most, America will know exactly the name of the new president and market participants will be able to build new trading strategies and plans. But for the British pound, the most "fun" part will begin just with the arrival of 2021. According to experts, starting in 2021, the British economy will lose tens of billions of pounds due to Brexit itself, tens of billions due to the lack of a trade agreement with the European Union, and tens of billions of pounds due to the pandemic and crisis. Thus, if the situation in the United States can hypothetically improve in a couple of months, then in Britain it is unlikely.

And, of course, one of the main factors for a possible new fall in the British economy may be the second "wave" of the COVID-2019 pandemic. The second "outbreak" began in the Foggy Albion in early September and in less than a month, the incidence rate rose to almost 15 thousand cases a day, which is three times higher than the maximum values this spring, during the first "wave". Given that the cold season is still ahead, we can expect an even greater increase in the number of cases per day. As practice has already shown, various "soft" quarantine measures do not deter the spread of the "coronavirus" in any way. Thus, Boris Johnson can refuse to introduce a "hard" quarantine as much as he wants, but if the country continues to increase cases of the disease, then the quarantine will have to be introduced, and Johnson himself may even have to resign. At least in recent weeks, these rumors have been actively exaggerated by the British media.

Meanwhile, the issue of providing a package of economic stimulus measures in the United States will have to be postponed for at least a month. Trump yesterday ordered an end to any negotiations with Democrats on the issue, as the parties cannot reach a consensus, and "it is better to focus on the election now". For whom is it better? For Trump himself? House Speaker Nancy Pelosi immediately criticized Trump's decision, accusing him of not being willing to help those affected by COVID-2019. Recent talks between Steven Mnuchin and Nancy Pelosi have shown that there is a difference of views of about $ 800 million. Democrats offered a $ 2.4 trillion package, while Republicans were willing to offer no more than $ 1.6 trillion. "Today, President Trump again showed his true intentions: to put himself first at the expense of the country. Members of Congress from the Republican party simply condoned it," Pelosi said. The speaker of the Lower House also recalled that the head of the Federal Reserve, Jerome Powell, has repeatedly stated that the pace of recovery in the US economy will slow down if a new aid package is not provided.

At the same time, White House chief of staff Mark Meadows believes that Democrats and Republicans will not be able to agree on a comprehensive package of measures. Therefore, we need to focus on individual stages of assistance to the economy, in which both sides can reach a consensus. For example, Meadows and Trump believe that it is necessary to allocate assistance to airlines, small businesses, and also allocate "coronavirus allowances" to individuals. However, this proposal also did not suit the Democrats. Trump even personally appealed to Pelosi: "If I am given a separate bill on benefits in the amount of $ 1,200, our citizens will receive them immediately. I am ready to sign this document right now. Do you hear that, Nancy?" In turn, Pelosi accused Trump of another attempt at populism. In her opinion, Trump is ready to sign a document on assistance to Americans only if each check has his name on it.

In general, problems in America are no less than in Britain. And at the moment, a flat might even be more logical than a trend. However, on the daily timeframe for the pound, there is no flat (in the long term). Only since September 11, the pair's quotes have been trading in a relatively narrow range, about 300 points wide. However, from a technical point of view, a downward movement is preferable. To do this, wait for the price to consolidate below the moving average line.

Several macroeconomic publications are scheduled for the last trading day of the week in the UK, while the calendar is empty in the States. British GDP growth rates for August and September, as well as industrial production and the trade balance, will be published today. We do not believe that these data will affect the movement of the pound/dollar pair in any way. Macroeconomic statistics continue to be ignored by traders, so there is no reason to expect that it will not be ignored today. Thus, you need to focus on the political factors of the United States and Britain. The pound may resume falling if data begins to arrive again about a decrease in the probability of signing an agreement between the EU and the Kingdom. The pound may also be under pressure from data on a sharp increase in "coronavirus" diseases. 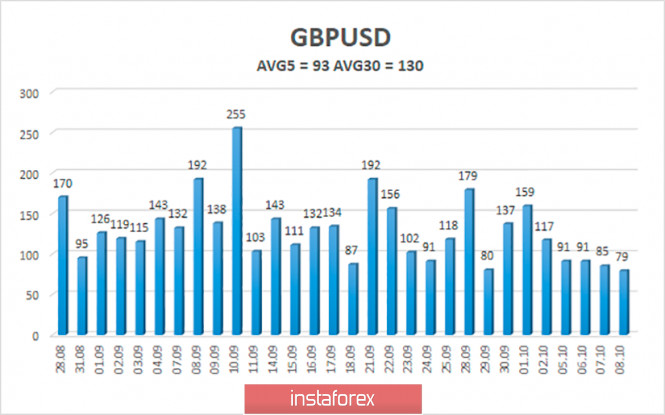 The average volatility of the GBP/USD pair is currently 93 points per day. For the pound/dollar pair, this value is "average". On Friday, October 9, therefore, we expect movement inside the channel, limited by the levels of 1.2846 and 1.3032. A new reversal of the Heiken Ashi indicator upward signals a possible resumption of the upward movement.

The GBP/USD pair fixed back above the moving average line on the 4-hour timeframe. Thus, today it is recommended to open long positions with targets of 1.3000 and 1.3032 as soon as the Heiken Ashi indicator turns up. It is recommended to trade the pair down with targets of 1.2846 and 1.2817 if the price returns to the area below the moving average line.

Interesting? Write a comment below.
 #Overview of the GBP/USD pair. October 9. The second "wave" of the epidemic in the UK is gaining momentum. Democrats and Republicans
Forward 
Backward 