The CFTC report was released on Friday evening, but was already formed on Tuesday, and so, it could not include the market's reaction to the news of US President D. Trump's coronavirus infection. Nevertheless, the weekly changes in the futures market fully correspond to the logic of growing demand for defensive assets amid negative economic changes of the world's leading countries and the threat of the rapid spread of the second wave of COVID-19.

A clear growth in the demand for the dollar against most currencies was shown in the report. The dollar's total short position declined from 3.56 billion to -30.98 billion, which was the best result in 8 weeks. It should also be noted that the net long position in gold clearly increased and the correction period is most likely completed. Therefore, gold is ready to continue its upward movement.

On another note, the biggest negative effect regarding Trump's health due to the coronavirus was caused by the message of the head of the White House staff Mark Meadows. He said that the blood sugar of the US president dropped sharply on Friday morning, and his condition only stabilized in the hospital. This message led to a sharp drop in oil prices – November futures for WTI lost more than 4.5% by the end of the day, dropping below $ 37 per barrel.

On Monday morning, markets partially recovered, oil is gaining about 2%, and demand for bonds is declining. Nevertheless, we should start with the premise that this week's dominant factors will be the growth in demand for the dollar and for defensive assets.

For the second month in a row, core inflation in the euro zone has updated its historical low, dropping to 0.2% in September. At the same time, very low inflation rates increased the risk of deflation in the euro area, although Lagarde said last September that based on the latest forecast, deflationary risks declined, which were slightly higher in June. 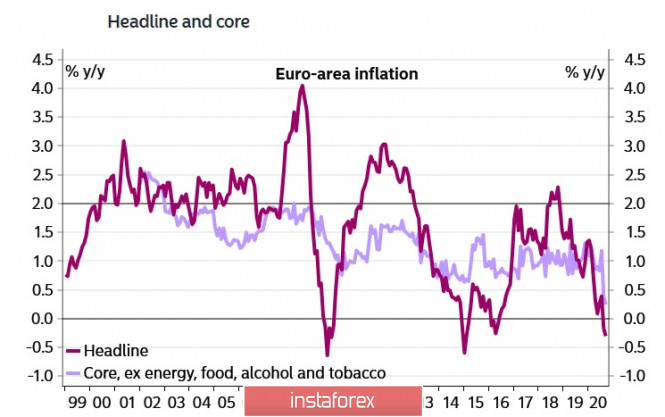 From the ECB's perspective, service prices are the most worrisome subset of prices that could create wider deflationary pressures. They cover almost 45% of the total HICP basket and an even higher proportion of the main components. In addition, the pricing of services is largely domestic, as opposed to non-energy manufactured goods.

As Lagarde recently explained, rate cuts are not the preferred tool, but as for QE, unconventional measures are becoming traditional. Consequently, low inflation increases the likelihood of PEPP expansion in the near future. Still, according to ECB's research, deposit rates should have fallen to -2% by now, if not for asset purchases from 2015. Accordingly, a record decline in inflation is the way to expand QE, which means that the euro will be in a high bearish pressure.

The market reacted negatively to the publication. The euro declined, while forming the third consecutive local high below the previous one, which technically is a strong bearish signal. The net long position on the futures market has dropped by 311 million, the estimated price continues to decline, and the trend is stable. 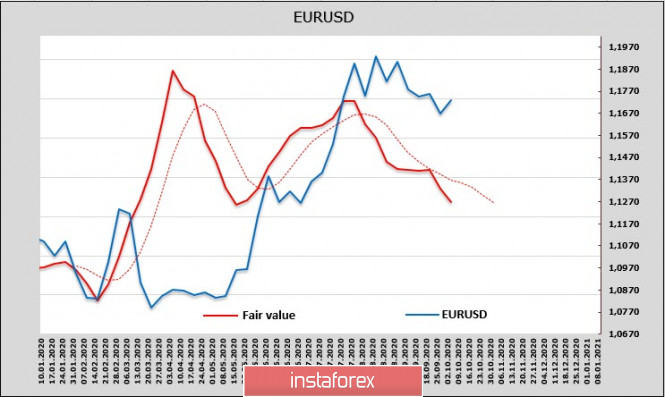 EURUSD's corrective growth will be temporary. Meanwhile, the formation of the top is likely in the area of 1.1750/70, after which a downward reversal is expected. The medium-term goal will be 1.15.

The pound turned out to be the record holder of the week in terms of sales, which amounted to 1.26 billion, and a net short position was formed on CME. On the other hand, the estimated price is much lower than the spot price and continues to fall. 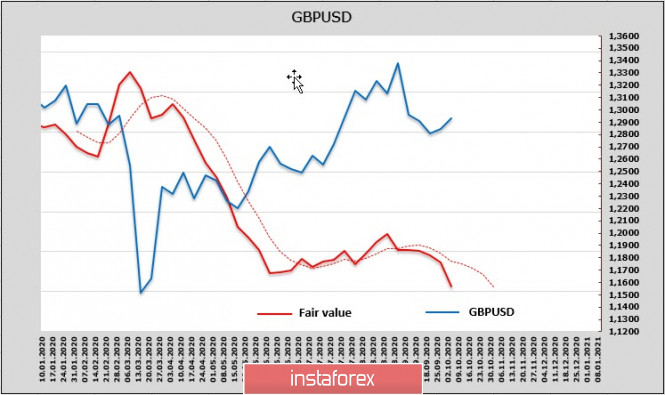 Apparently, investors do not expect anything good from the approaching end of the Brexit deal. There is a growing probability of a rate cut by the Bank of England, which will lead to a drop in yields.