Technical Analysis of BTC/USD for October 15, 2020

Another batch of 50 BTC, which has been lying untouched since 2010, has been moved today from home addresses. Their value is estimated at about $ 570,000 today. The block explorer data shows that these 50 coins were first sent to this address on November 9, 2010 as part of a Coinbase transaction. This means, no less than that, that these BTCs were the block mining award that was awarded to the miner.

No other transactions took place on this wallet. Until today, of course. The only exception is 0.00000547 BTC, which was sent to this address at the end of August in a spam-like transaction (over 300 different wallets were affected). Most likely it was a so-called "dust attack", mainly used to track BTC movements.

The coins were sent to three different addresses today: two Bech32 (SegWit format) and one P2SH, mainly used for multi-signature and non-native SegWit transactions. The transfers were 30.16, 12.48 and 7.34 BTC respectively.

After the BTC/USD pair had made a new local high at the level of $11,679, just above the technical resistance seen at $11,646, the bears took temporary control over the market and push it back towards the technical support located at $11,223. Since then the BTC/USD pair has been consolidating in the narrow zone located between the levels of $11,439 - $11,250, still below the supply zone. Please notice, Bitcoin is now trying to enter the supply zone located between the levels of $11,646 - $11,785, so some kind of the bearish pressure might be seen. In that case, the price might pull-back towards the technical support seen at the level of $11,223 or $11,062. Any violation of the last one will likely result in a further correction towards the level of $10,940 or below. 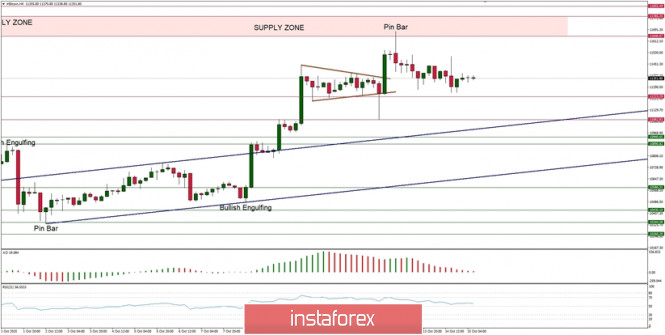