Technical Analysis of BTC/USD for October 19, 2020

Although the recent developments around BitMEX seemed to shake up the entire market, bitcoin itself remained indifferent. Despite the fact that the largest cryptocurrency felt enormous pressure to sell, it did not give up and was able to go up to $ 11,731. This is a price level that we haven't seen for a long time.

Interestingly, even as Square announced its investment in Bitcoin, the market absorbed the news and did not behave very volatile. Many investors have pointed out that bitcoin has developed a maturity that the largest institutions are not indifferent to.

According to Arcane Research, the Bakkt exchange witnessed another record month of trading between September and October. The increased interest on the part of institutions resulted mainly from the interest of companies such as Microstrategy and Square. As the stock exchange is dedicated to institutional investors in the US, the above volume increase suggested a growing demand for BTC among institutions.

Arcane Research highlights the importance of this growth. He notes that 400 BTC contracts expired on Bakkt in October. This was an increase of 14% from September. The number of open contracts for Bakkt has been gradually increasing since mid-September. Open Interest was about $ 18 million as of October 15, but a day later it was down $ 3 million.

Other platforms widely used by institutions were LMAX Digital and CME, which also saw an increase in volume in October. According to Skew, LMAX Digital came second in terms of 24-hour BTC spot volume, right after Coinbase.

The BTC/USD pair has been consolidating in the narrow zone located between the levels of $11,439 - $11,250 for all the weekend. Bitcoin keeps trying to enter into the supply zone located between the levels of $11,646 - $11,785, so some kind of the bearish pressure might be seen. In that case, the price might pull-back towards the technical support seen at the level of $11,223 or $11,062. Any violation of the last one will likely result in a further correction towards the level of $10,940 or below. 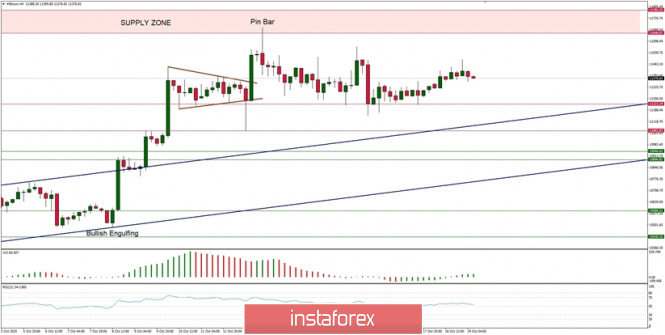