Technical Analysis of BTC/USD for October 2, 2020

According to a statement released on Thursday, the CFTC has filed a civil suit in the South District of New York against five entities and three individuals who allegedly own and operate the stock exchange.

The accused include Arthur Hayes, known publicly as the CEO of BitMEX, as well as Ben Delo and Samuel Reed. The CFTC claims that these individuals own and operate BitMEX through a "maze of corporate entities".

The CFTC aims to lift or fix all "unfair profits", civil fines, permanent trade bans, and orders against future violations. They believe that BitMEX has been offering retail traders $ 1 trillion in face value illegal leveraged trading services since its inception in 2014. Despite its success, the CFTC believes the exchange has failed to adopt "most basic compliance procedures". These include failure to register with the commission, unfamiliarity with the client and anti-money laundering procedures.

The BTC/USD pair has reacted to the BitMex exchange news negatively and dropped lower from the level of $10,890 to the level of $10,353 (at the time of writing the article). This move down has support in momentum, that is breaking into the negative territory. It looks like the market will test the level of $10,000 sooner or later as there is a clear negative sentiment that dominated the Bitcoin trading. The next intraday supports are seen at the levels of $10,344 and $10, 260. 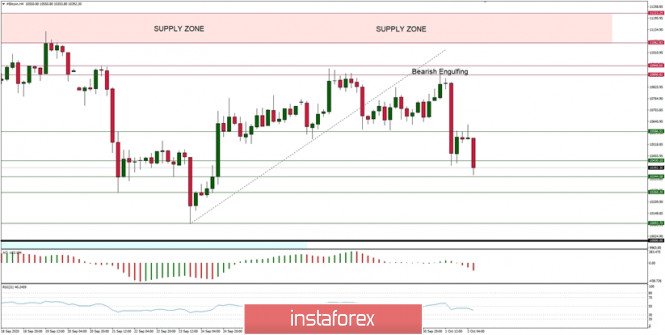