Technical Analysis of BTC/USD for October 23, 2020

In a video interview with Jeff Roberts of Fortune, he was asked how the People's Bank of China's digital yuan initiative would impact the cryptocurrency industry. Zhao replied that any blockchain or digital currency would be good for the entire industry as it legitimizes digital assets and widens awareness. He added that although there is now a race between the largest countries to launch such a currency, most CBDCs will initially be more restrictive, but will evolve over time.

When asked directly about the threat to Bitcoin, CZ replied that very few CBDCs would have the same freedom as Bitcoin and be highly centralized and controlled. However, in the long run, he warned:

|If the government were to push for another cryptocurrency that is even more open, more free, has fewer restrictions than Bitcoin, and is faster and cheaper to use, it would put Bitcoin at risk. But it's good for the industry, it's just better than Bitcoin, and it could replace it".

Asked if Binance intends to release a yuan-anchored stablecoin in addition to existing stablecoins, CZ said nothing of the sort would come out any time soon. There are too many restrictions on capital flight from China, he added.

The BTC/USD pair has made a new swing high at the level of $13,159 and a Pin Bar candlestick pattern was made at the end of the rally. The local correction that followed the high has hit the level of $12,648 and the market has started to consolidate. The momentum is still strong and positive, but the market conditions on the H4 time frame are clearly overbought. This situation might indicate a possible temporary pull back below the level of $12,648 before another wave up will develop. The old supply zone seen between the levels of $11,646 - $11,785 will now act as a demand zone for bulls. 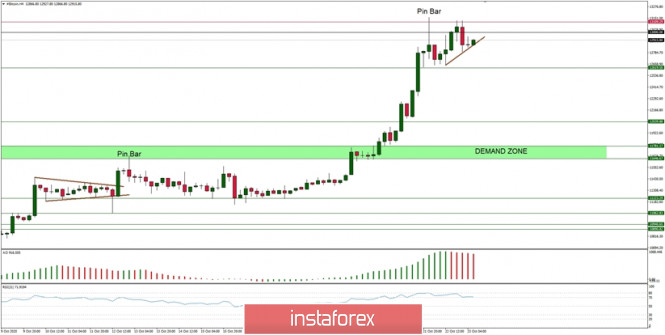