Technical Analysis of BTC/USD for October 6, 2020

According to the BTCparsers bot, which monitors the Bitcoin blockchain, someone transferred 50 BTC inside the network that had been dug back in the Satoshi Nakamoto era - in 2010 to be exact.

According to media reports, a similar incident took place on May 20, when 50 BTC was transferred from a wallet that had been intact since February 2009. This rare transaction can be feared by investors. Since someone of the earliest early adopters decided to start their coins, there is a risk that they will throw huge amounts of cryptocurrencies into the market. This would lead to market drops.

The last such move, reported by the authors of BTCparsers, took place on October 2, so theoretically, it could have additionally fueled the latest price correction. But at the same time, concerns about the BitMEX scandal or about Donald Trump's COVID-19 appeared on the market.

Traffic in the blockchan at such an old address led to speculation that it was Satoshi Nakamoto himself who began to cash his fortune. In the end, it was later found that the address was not part of the so-called "Patoshi's" blocks, which researchers believe in the fate of the Bitcoin wizard were excavated by the creator of the cryptocurrency.

Satoshi is believed to own (assuming he is no longer alive) around 1 million BTC. This would currently make a fortune of about $ 10.5 billion.

The BTC/USD pair has been broken above the level of $10,679, which was the 61% Fibonacci retracement of the last wave down. As long as the short-term trend line support (marked as black dash line on the chart) is not clearly violated, there is a chance for the market to continue to move higher. The key level here is $10, 697 - it can not be violated. The next target for bulls is seen at the level of $10,890, which is the last swing high. On the other hand, the nearest technical support is seen at the level of $10,586 and $10,547. 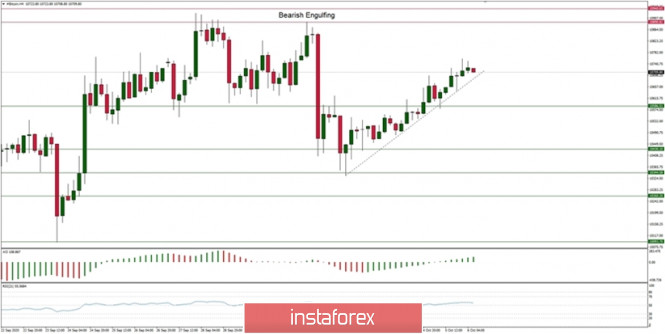