Trading plan for the GBP/USD pair for the week of October 12-16. New COT (Commitments of Traders) report. Professional traders 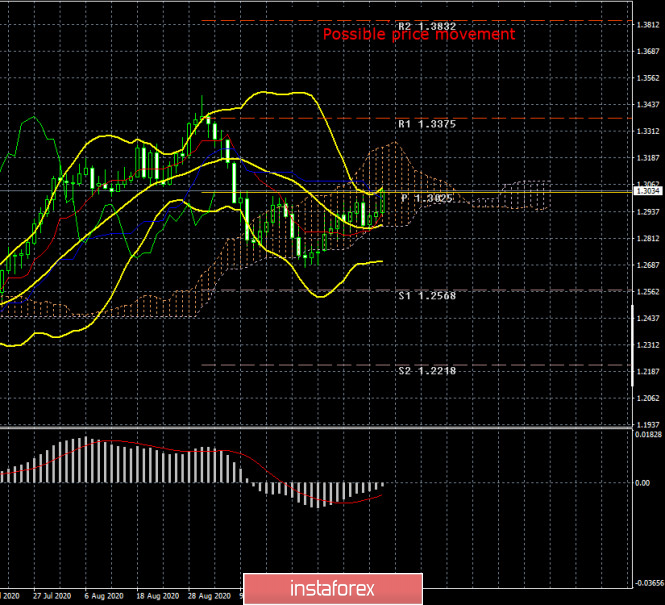 The GBP/USD currency pair, unlike the euro/dollar, still shows signs of life and does not trade in absolute flat. Recent movements of the pair: correction after the upward trend to the Senkou Span B line on the 24-hour timeframe, rebound from this line and move up to the Kijun-sen line. As you can see, when there is no flat, all the strong lines of the Ichimoku indicator are worked out very accurately and clearly. Now we expect a price rebound from the Kijun-sen line with a resumption of downward movement (a rebound can occur from 1.3073 – this is the previous price value of this line) or a resumption of the upward trend. The fundamental background remains extremely heavy and negative for both currencies. Thus, it is the technical picture that now has the highest priority in forecasting. 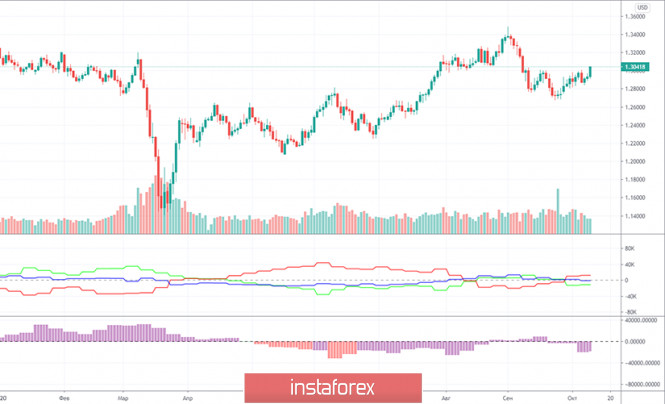 The New COT (Commitments of traders) report for the British pound showed that non-commercial traders in the period from September 29 to October 5 almost rested. The pound rose by about 140 points during this period, which is slightly more than the average daily volatility of this currency. A group of Non-commercial traders opened 1,093 buy contracts and closed 435 sell contracts during this time. Thus, the net position of professional traders increased by 1,500 thousand contracts. However, as with price changes, these changes in the mood of professional traders are purely formal. It is impossible to draw any conclusions or forecasts about the future movement of the pair. In general, since the beginning of September, the "Non-commercial" group has been reducing its net position, which means that they are becoming more bearish. In principle, this behavior of major traders completely coincides with what is happening in the market during this period. However, despite the growth of the British currency in the last few trading days, we are still inclined to resume the fall of the pound. Non-profit traders have more contracts to sell, and the fundamental background in the UK remains extremely weak and dangerous for the pound, in terms of prospects for the rest of 2020 and 2021.

The fundamental background for the GBP/USD pair can be described in just a few words: Brexit, trade deal negotiations, US elections. Moreover, if the elections in America are more important for the EUR/USD pair, then Brexit and negotiations on further relations between London and Brussels are more important for the GBP/USD pair. And recently, priority has been given to the second "wave" of the "coronavirus" in the Foggy Albion, which a couple of weeks after its start has already broken all records for the incidence of the first "wave". Thus, the British economy is in a "state of emergency". The Bank of England has been sending signals to the market throughout 2020 that it will start lowering the key rate below zero if necessary. And no one doubts that this need will come. Every day in Britain, 13-14 thousand new cases of the disease are recorded. Brexit talks extended by 1 month and this is all positive news on this topic. Legal proceedings between London and Brussels over the "Johnson bill" have not yet begun and this is all positive news on this topic. In any case, the British economy will start 2021 with losses associated with severing ties with the European Union, even if a trade deal is somehow agreed. Thus, in light of all these events, we believe that in the long term, the British pound has only one road – down. If there is a trade deal between the Alliance and the Kingdom, it will certainly mitigate the negative impact a little, but not so much. It should only be noted that over the past year, many manufacturing and financial companies have been actively leaving London and the UK. And it is unlikely that they do this based on divination on coffee grounds. Few big companies want to stay in Britain if it falls out with the EU and trades with it under WTO rules.

1) Buyers let the initiative out of their hands a few weeks ago. Now they need to return to the area above the critical line(1.2997-1.3073) on the 24-hour timeframe, and only then can we expect further strengthening of the British currency in the long term. So far, despite the growth of the pound in recent weeks, we are inclined to resume the fall of this currency.

2) Sellers still have a better chance of forming their own trend. To do this, they just need to keep the bulls above the Kijun-sen line and then consolidate below the Senkou Span B line (1.2865). Then the prospects for a new round of decline in the pair's quotes will grow significantly, and the first goal will be the support level of 1.2568.

Explanation of the illustrations:

Price levels of support and resistance (resistance/support) – levels that are targets when opening purchases or sales. You can place Take Profit levels near them.

Support and resistance areas – areas that the price has repeatedly bounced from before.

Indicator 1 on the COT charts – shows the net position size of each category of traders.