On Thursday, the USD/JPY pair went up by 27 points and the growth was once again stopped by the resistance of the balance line on the daily scale chart. The price will swing now from the Kruzenshtern line at 105.80 to the price channel line at 104.96, and where it will move in case of overcoming resistance and support, it is impossible to determine now and in this situation. 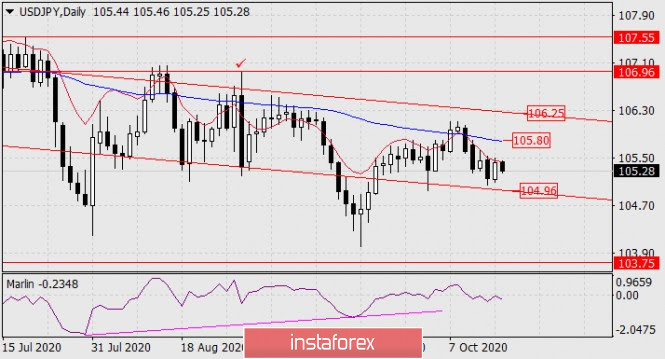 The signal line of the Marlin oscillator moves sideways under the border with the territory of growth, although this is a harbinger of a strong movement in one direction. But it can also be short-term with a sharp reversal to the initial positions, as it was on July 24 - 30 on a similar behavior of the oscillator. From the current levels, the price can work out any designated target at 105.80 and 104.96 with equal probability. The situation is not commercial. However, if the price goes down to 104.96, the price will fall to the level of 103.75 from which a quick reverse correction is possible. The upward movement is noticeably more difficult for the price, here only a consolidation above 106.25 opens the way to 106.96. 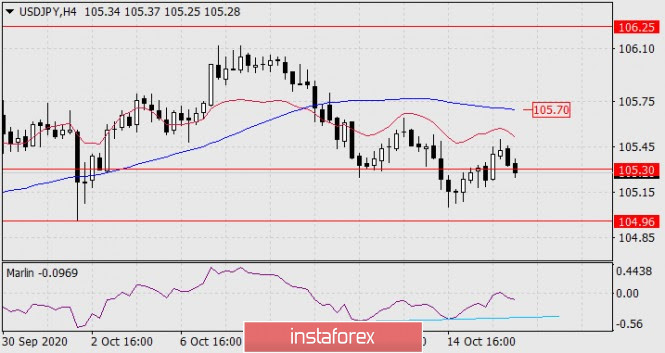 The duality of the situation is seen in more contrast based on the 4 - hour chart. The price may decline to the first "bearish" target of 104.96 and go up with the formation of a double convergence on the Marlin oscillator. Also, the price can continue to implement the existing convergence with working out the nearest resistance of 105.70 along the Kruzenshtern line or it will be working out the Kruzenshtern line of the daily timeframe at the price of 105.80. We are waiting for clarification of the situation for a few more days.