USD/JPY drops as the JP225 plunges and due to USDX's minor retreat ahead of the NFP report. It accelerates its sell-off and it could invalidate a potential further growth in the short term.

The pair is trapped within an extended sideways movement, but I really believe that the US data could bring a clear direction and a fresh trading opportunity. The yen rallies as the Japanese Consumer Confidence increased from 29.3 to 32.7 points, beating the 31.6 estimates. It remains to see if the USD will be saved from the downside by the US NFP which is expected around 900K. The Unemployment Rate could drop from 8.4% to 8.2% in September, while the Average Hourly Earnings could rose by 0.5%. 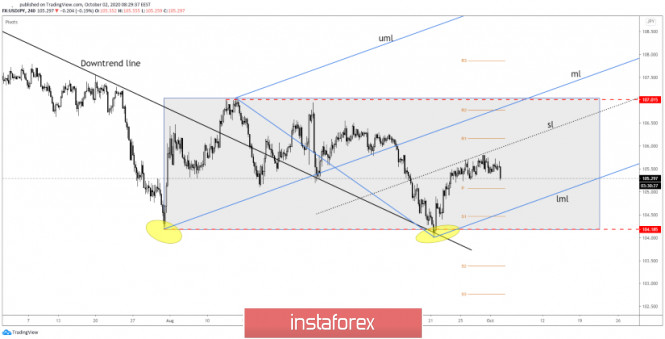 The pair have developed a potential major Double Bottom pattern, but only a valid breakout above 107.00 psychological level would have confirmed it. A downside breakout from this range invalidates the chart pattern and suggests selling as USD/JPY could drop deeper towards the 103 level.

USD/JPY is still undecided as long it stays between 104.18 and 107.01 levels. A valid breakout from this extended range could bring a great trading opportunity.

Sell it if the price makes a valid breakdown below the lower median line (lml) and under 104.18. R3 (102.76) could be used as a potential downside target.

Buy USD/JPY if it jumps above 106.00 psychological level or after a false breakdown with great separation through the immediate support levels (lml, 104.18). A major upwards movement will be validated by an upside breakout from the extended range, above 107.