Analysis and trading signals for novice traders. How to trade EUR/USD on November 9? Plan for opening and closing deals 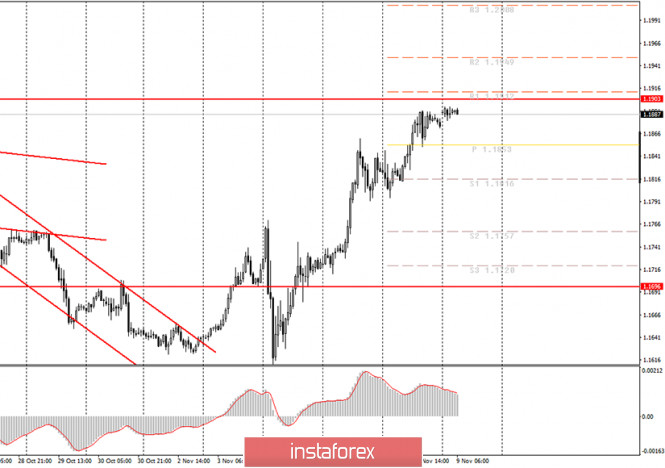 The EUR/USD pair did not start widely expected downward correction during Monday night trading. Moreover, the pair almost immediately managed to update Friday's high. However, it still remains below the level of 1.1903, which we consider very important. The 1.1903 level has been the upper border of the side channel for a long time. Thus, this time the drop looks possible after the pair breaks above this level. From the low of last week, the European currency went up about 280 pips. So, a pullback is simply necessary. As novice traders can see, the MACD indicator has already turned down and it is declining despite the fact that the price is moving up. This is a very complex feature of the indicator. In cases where it cannot grow higher, it begins to run out of steam even while maintaining the main movement. Therefore, the sell signal was formed at the very end of Friday. Whether it will be implemented is a big question. If the pair slides below the 1.1903 level, it may resume the downward movement. Perhaps the situation will change with the opening of the European session, that is, in the next hour.

Joe Biden has won the US presidential election but the US currency has not yet extended any gains from this event. Over the past week, the US dollar has been falling and its weakness was due to the growing tension in the foreign exchange market. Elections always trigger uncertainty across the market until the moment they are over. The national currency tends to become cheaper. However, the election has come to an end but the US dollar is unable to regain footing. Experts say that the greenback is fluctuating as Donald Trump may contest the results of the election. He has already refused to give up peacefully his seat to Joe Biden. He is preparing to file lawsuits against almost all the states where he lost. Legal proceedings may begin in the near future. According to experts, there is almost no chance for Trump to make the court completely review the election results. He did not lose by 10-15 votes. So, even if there were mistakes or falsifications, they were unlikely to change the overall picture. Biden has gotten 4 million more votes. However, experts say that the court proceedings may be prolonged even until January 20 (when a newly elected leader takes power). If by this time the US Supreme Court does not give a clear verdict on the results of the voting, then Joe Biden will not take office as President, while Donald Trump will leave it anyway. Uncertainty persists, which is bullish for the US dollar.

On November 9, the following scenarios are possible:

1) It is recommended to open long seals on the EUR/USD pair. However, it is better to open long positions if the price manages to breaks above the level of 1.1903. Traders should also pay attention to the possible formation of an uptrend line or channel. After such a strong upward movement, a downward correction is highly likely to occur.

2) It is risky to open short deals at this time despite the fact that the downward movement scenario looks more probable. Theoretically, novice traders can try to open short deals given the sell signal from the MACD with targets of 1.1798 and 1.1737. Even now it can be observed that the indicator is discharged. In any case, do not forget about the stop loss, which should be placed above the level of 1.1903.

What is happening on the chart:

Support and resistance levels are the levels that are targets when opening long or short deals. Traders usually place take profit levels near them.

Red lines are channels or trend lines that display the trend and indicate which trajectory should be picked for the current trading.

Up/down arrows show whether traders should open long or short traders when certain levels are broken.

The MACD indicator (14, 22, 3) is a histogram and a signal line. If they intersect, it is a signal to enter the market. It is recommended to apply it in combination with trend lines (channels, trend lines).

Important speeches of some officials and reports (always included in the news calendar) can greatly influence the movement of the currency pair. Therefore, when some speeches or reports are on tap, it is recommended to trade as carefully as possible or exit the market in order to avoid a sharp reversal of the price against the previous movement.

Beginning traders should remember that not every transaction on Forex is profitable. Developing a clear strategy and money management are the key to success in trading.

Interesting? Write a comment below.
 # Analysis and trading signals for novice traders. How to trade EUR/USD on November 9? Plan for opening and closing deals
Forward 
Backward 