Analytics and trading signals for beginners. How to trade EUR/USD on November 2. Analysis of Friday deals. Getting ready 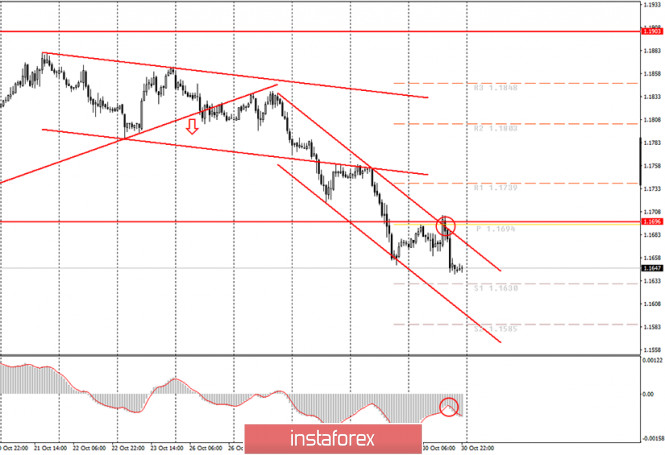 On Friday, October 30, EUR/USD resumed its downward movement after a slight correction and reached the level of 1.1650 by the end of the day. Thus, the pair continues to move within the downward channel, having failed to consolidate above it. In addition, the pair failed to settle above the level of 1.1696 that served as the lower border of the sideways channel for a long time. Therefore, the pair's trajectory has been predictable so far. As for trading signals, on Friday a signal of medium strength was generated (marked by a circle on the chart). By the time of its formation, the MACD indicator had not yet reached the zero level. So, at the moment when the sell signal was formed, the price had already moved down by 50 pips, which is quite a lot given the current volatility. So, those novice traders who opened the deals following this signal gained zero profit by the end of the session. We think that the downtrend will not continue immediately at the trade opening on Monday. Therefore, we recommend waiting for a new round of correction and new sell signals (if the downtrend continues).

On Friday, a number of various macroeconomic reports were published in the EU. We will focus on the most important ones. Thus, inflation rate in the EU in October reached -0.3% year-on-year, which is extremely low, whereas the unemployment rate rose to 8.3%. The first two reports were negative for the European currency. According to preliminary estimates, the most important GDP indicator for the third quarter was -4.3% y/y and +12.7% q/q. The quarterly data was quite strong and significantly exceeded the forecasts of + 9.4%. This means that the rate of economic growth in Europe for the third quarter is quite high and is much higher than in the US and the UK. However, the European economy may face another round of contraction due to the second wave of coronavirus and new lockdowns imposed in the euro area. This makes traders more cautions when trading the euro. As a result, we can say that there was no particular reaction to these reports. What is more, the rise of the US currency in the second half of the day can hardly be linked to any macroeconomic events since there were no important publications in the US that day.

On Monday, November 2, the EU will release the data on business activity in the manufacturing sector for October. According to forecasts, these indicators will not differ much from the previous month's data. Moreover, the industrial sector is expected to be in a more or less good state despite the pandemic. The service sector will suffer the most, as already mentioned by Christine Lagarde, head of the European Central Bank. The ISM and Markit PMI data will be published in the US on Monday. The indices are expected to be above 50.0, so the markets are unlikely to react to this data.

2) At the moment, selling the pair looks more relevant, although the price has already fallen by 190 pips. As long as the price remains inside the descending channel, it is recommended to sell. The problem is that the channel is quite narrow and any correction may push the price out of it. The MACD indicator does not have enough time to form a strong sell signal. We believe that this trend will end in the coming days.

Red lines are the channels or trendlines that display the current trend and show in which direction it is better to trade now.

The MACD indicator (14, 22, and 3) consists of a histogram and a signal line. When they cross, this is a signal to enter the market. It is recommended to use this indicator in combination with trend patterns (channels and trendlines).

Important announcements and economic reports that you can always find on the economic calendar can seriously influence the trajectory of a currency pair. Therefore, at the time of their release, we recommend trading as carefully as possible or exit the market in order to avoid sharp price fluctuations.

Interesting? Write a comment below.
 # Analytics and trading signals for beginners. How to trade EUR/USD on November 2. Analysis of Friday deals. Getting ready
Forward 
Backward 